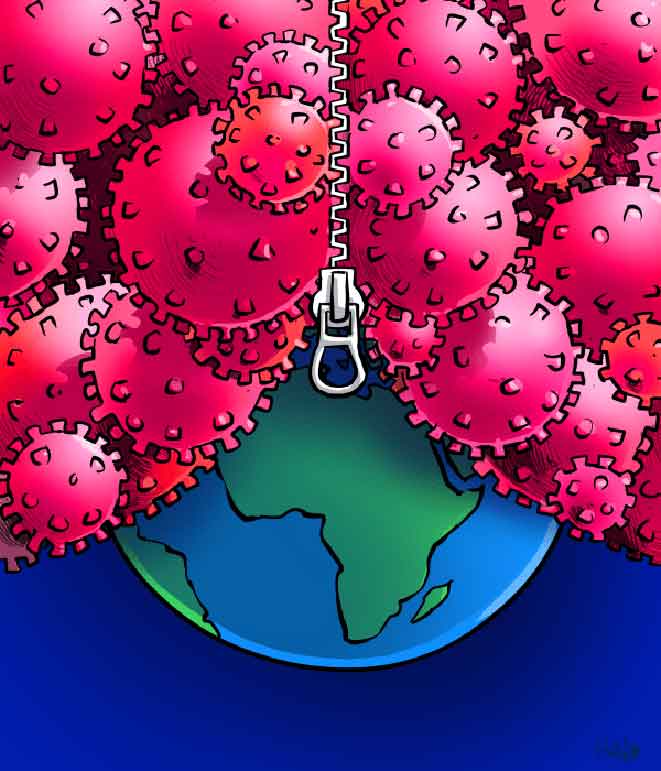 A friend asked me the other day if I didn't think the agitated media coverage of Covid-19, the coronavirus disease, was getting out of control. She knows that I have long been skeptical of the shrill alarmism that has become inseparable from public discussions of climate change. Isn't this pretty much the same?

It isn't, I said, and explained briefly why the two cases strike me as very different. But I've been reflecting on her question. Perhaps a longer explanation might be useful.

The first and most obvious difference between climate panic and the mounting anxiety over coronavirus is that there is a long history of viral epidemics, plagues, and pandemics. There is nothing speculative or theoretical about the murderous efficiency with which new diseases can burn through societies encountering them for the first time.

The Plague of Justinian that erupted in Constantinople in 541 is estimated to have killed at least 25 million people as it spread across Asia, North Africa, Arabia, and Europe. The Black Death in the 14th century wiped out one third of the population of Eurasia. The most lethal pandemic of the 20th century, the Spanish flu outbreak at the end of World War I, sent more than 50 million victims to early graves — more than all the soldiers and civilians killed during the war.

The horrors of pandemics have been documented and depicted often. Yet while climate activists have been forecasting world-ending doomsday scenarios since the 1960s, the apocalypse never seems to materialize.

Although climate is always in flux, unmitigated anthropogenic warming would doubtless lead to cataclysm. But human societies have a genius for mitigating and adapting their way out of existential threats. Which is why it's dangerous, as climatologist Michael Mann has written, to overstate the science of global warming "in a way that presents the problem as unsolvable, and feeds a sense of doom, inevitability, and hopelessness."

By contrast, worrying about the devastation of an active viral epidemic is not merely a matter of "trusting science" or "waking up" to an inconvenient truth. Plagues are real. They have erupted with deadly effect in the past, just as Covid-19 is erupting in the present.

Italy, the first European country to experience the disease, went from no cases to more than 12,000 in just three weeks. On Wednesday alone, Italy's death toll from the coronavirus rose from 631 to 827. In Iran, well over 11,000 people are reported to have the disease, of whom 514 had died, as of Friday morning.

But dozens of senior regime officials are among the afflicted, which strongly implies that the disease is far more widespread than Tehran is acknowledging. As I write, the numbers in the United States are far lower, but they won't be for long. Governments and industries are putting up once-in-a-generation firewalls to create the social distancing that can break the chain of viral transmission and "flatten the curve" of the epidemic's growth — banning flights from Europe, suspending the NBA season, cancelling marathons and major parades.

All this is in keeping with scientific principles that are well-known, empirically confirmed, and grounded in experience, not politics.

This is not to suggest that the Covid-19 crisis hasn't been infected by politics: Of course it has. Like so much else these days, this crisis has been turned into political fodder — on the right no less than the left. Whenever something bad happens, partisans try to score political points or cast political stones.

By and large, however, the health and public-policy response to the coronavirus has been focused on the practical and the here-and-now: gathering data, prioritizing research, developing a vaccine, readying medical facilities — and communicating to the public in temperate language and timely fashion the most practical means of mitigating the expected harm. Experts have stuck, for the most part, to known knowns and known unknowns, even as they have candidly made clear that the contagion is certain to get much worse before it gets better.

The contrast with the debate over climate change could hardly be more pronounced.

On the basis of computer models whose results have repeatedly missed the mark, climate-change crusaders, including many in the media, fervently insist that "the time for debate is over," that "97 percent" of scientists share their view, and that anyone skeptical that catastrophe looms is the moral equivalent of a Holocaust denier. With intolerant zeal, they declare that contrary opinions must be silenced.

Nothing like that can be seen amid the mounting anxiety over Covid-19. Indeed, as Larry Kummer points out at the geopolitics blog Fabius Maximus, statements from the Centers for Disease Control and the World Health Organization have been "explicit and specific about the uncertainties in our knowledge about the coronavirus epidemic. . . . The scientists of WHO and the CDC have conducted their campaign without attacks, let alone smearing, of those experts who disagreed with them (and there are many areas of disagreement)."

But maybe the most significant difference between the coronavirus and climate cases is this: No one is turning coronavirus into a culture-war battlefield. The disease is not being exploited to demand a drastic overhaul of modern life. There is nothing punitive about the extreme steps now being undertaken — quarantines, school closures, shutting the US Capitol, the lockdown of an entire European country. Harsh as they are, their sole purpose is to slow a contagion, not to radically transform society in keeping with environmental activists' utopian notions.

Apart from some politics around the edges, everything being said and done in connection with the coronavirus is geared to saving lives. The coverage may be a little breathless, and panic is never helpful, but this is no ideology-driven overreaction. The next few months are apt to be terrible. I'm often skeptical, but not about this.