'Moderate' Joe Biden has moved way to the left 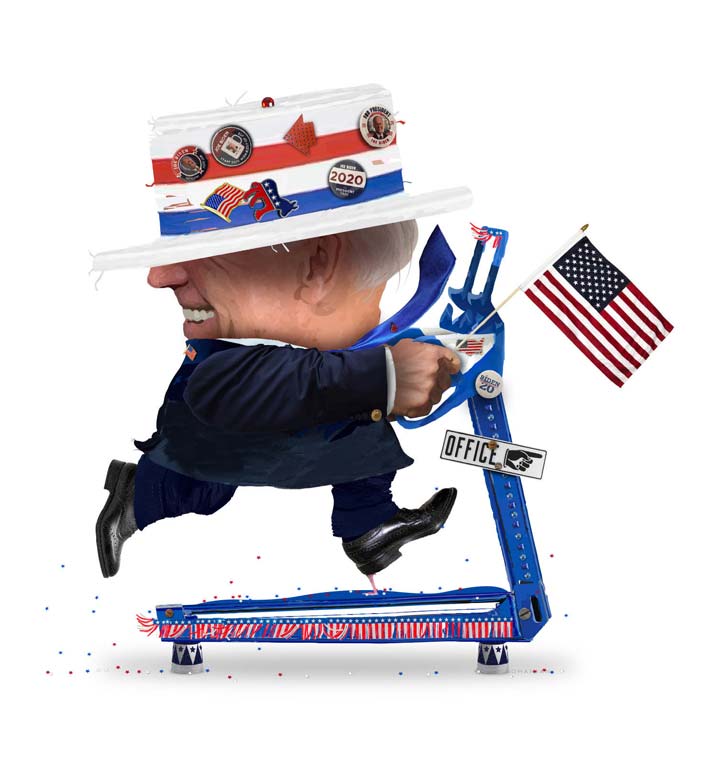 For much of the past year, the broad storyline of the 2020 Democratic presidential campaign has been that Democrats are united in a fierce determination to oust President Trump but divided over how best to do so.

To the "progressive" camp, the Trump presidency represents a crisis that can be halted and reversed only with the boldest, most sweeping changes in US policy.

The "moderate" camp, by contrast, believes that the only way to beat Trump is with a candidate who can appeal to more than just hardcore Democrats — who can reach independents and even some centrist Republicans with a program that eschews radical excess, appeals to the sober mainstream, and holds out the promise, in a famous phrase from American presidential history, of a return to normalcy.

The nomination battle has effectively come down to a two-man race: Senator Bernie Sanders of Vermont occupies the progressive lane and former vice president Joe Biden is running in the moderate lane. No one doubts Sanders" leftist credentials. But is Biden really a moderate?

To hear some leftists tell it, Biden is not only moderate, but intolerably so. When, at one progressive conference, he was described as seeking "middle ground" on climate policy, Democratic firebrand Alexandria Ocasio-Cortez was contemptuous: "I will be damned if the same politicians who refused to act come back today and say we need a middle-of-the-road approach to save our lives."

Biden may seem hopelessly accommodationist to those on the Democratic Party"s leftmost fringe. But in reality, he is running on a platform far more progressive — i.e., far less moderate — than any Democratic presidential nominee in history.

One of Biden"s foremost selling points is the eight years he spent as vice president in the last Democratic administration. In St. Louis over the weekend, he spooneristically proclaimed himself an "O"Biden-Bama Democrat." If Biden wins the nomination, he can count on robust support from Obama, perhaps the most beloved figure within the Democratic Party today.

Yet on issue after issue, Biden has veered sharply from Obama"s path. On health insurance, for example, Obama rejected a public option as part of the Affordable Care Act and repeatedly stressed the importance of maintaining private coverage. But Biden favors a public option open to everyone, including the majority of Americans with employer-sponsored health coverage.

Biden supports government-funded health care even for unauthoritzed immigrants, something Obama never came close to proposing. He supports a sharp increase in US refugee admissions and a path to citizenship for all undocumented immigrants. When Obama ran for the White House in 2008, by contrast, it was as an enforcement-first hard-liner. He cracked down so hard on those who crossed the border illegally, he was known for much of his presidency as the "deporter-in-chief."

The former vice president has moved emphatically leftward on abortion, on the death penalty, on free trade. By any understanding of "moderate," as that term was used when Obama or Bill Clinton was president, Biden is no moderate.

What Biden is today is what he has always been: a liberal Democrat. But as his party has shifted left in a hyperpolarized era, Biden has shifted with it. Many of the positions he takes that are described as centrist today, observed Axios in January, "would have been liberal dreams during the Bill Clinton years and still out of reach in the Obama era." On policy, Biden is a moderate primarily in the sense that he embraces positions that most Democrats no longer fight over.

All of which means that even if Biden wins the Democratic nomination, progressive Democrats will have reason to rejoice. Their party"s standard-bearer will be someone whose platform skews further to the left than any major party platform in the past. Sanders may not end up on the November ballot, but it will unmistakably reflect his influence. For he and his band of progressives have pushed their party to the left with such success that even the "moderate" in the race would be the most liberal Democrat ever nominated for president.