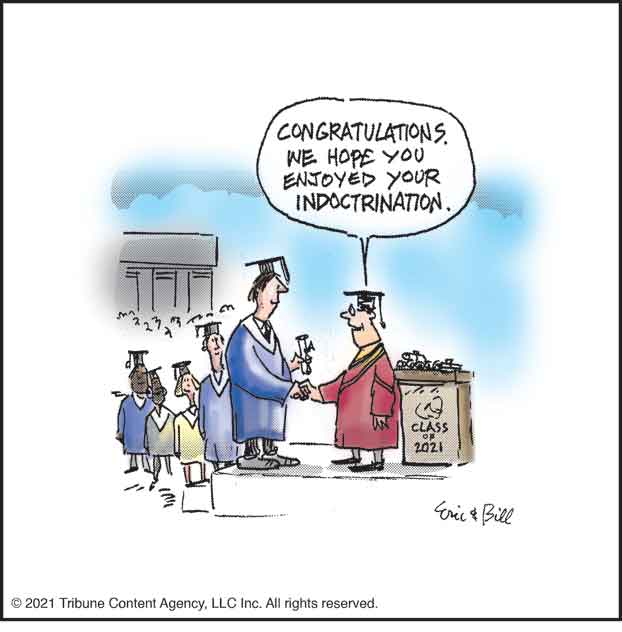 Here's something you don't see every day: More than 50 faculty members at the University of Massachusetts Boston are openly criticizing a campaign to bind their institution into an ideology of racial and social engineering far removed from the time-honored role of higher education.

The professors' criticism takes the form of an online letter posted in response to proposed new mission and vision statements for the university. They reflect what faculty members regard as a hyperfixation on the part of the campus's leadership — UMass Boston recently installed a new chancellor and a new provost — with casting everything the university does, as some of them put it, in terms of power dynamics and hidden racism.

UMass Boston already has a mission statement. Adopted in 2010, it admirably lays out the university's purpose. Its first sentence identifies UMass Boston as "a public research university with a dynamic culture of teaching and learning, and a special commitment to urban and global engagement." It celebrates the school's "vibrant, multi-cultural educational environment" and "broadly diverse campus community." And it commits UMass Boston to "creating new knowledge while serving the public good of our city, our commonwealth, our nation, and our world."

Following that statement is a longer discussion of the university's values. They include "creativity and discovery," "diversity and inclusion," and "economic and cultural development." Emphasized again and again, however, are three values in particular: teaching, research, and service — quintessential objectives for the only public research university in New England's largest city.

As a concise summary of what UMass Boston stands for, the 2010 statement is close to ideal. By contrast, what the administration suggests replacing it with reeks of woke indoctrination.

The proposed new mission and vision statements mention "research" and "teaching" only in passing. They begin instead by proclaiming that UMass Boston must become "an anti-racist and health-promoting institution" that supports "diverse forms of knowledge production" and is dedicated to education "rooted in equity, environmental sustainability, [and] social and racial justice." They reiterate that the university's purpose is to be "anti-racist" and to promote "climate, environmental, and racial justice."

The draft of the vision statement concludes with a vow to hold everyone associated with the university "accountable" for ensuring that "these values drive all decision-making" at UMass Boston — including decisions about research, the allocation of funds, and the development of campus policies.

Alarm bells went off when these drafts were released. In the College of Science and Mathematics especially, several instructors were dismayed by the statements' heavy dose of political and activist code language with the unmistakable implication that at UMass Boston, the pursuit of knowledge and exchange of ideas is to be subordinated to a rigid left-wing agenda.

So late last month, a group of professors in the STEM fields — engineering, biology, mathematics, chemistry, physics, and computer science — released a letter expressing their "extensive concerns" about the tone and direction of the proposed new statements.

"Under no circumstances can political or ideological activism be the primary purpose of a public university," they wrote. Of course individual students or staff members have every right to be active in social causes. "However, in this regard the role of the university is to empower people to take action themselves — not to coerce students, faculty, or institutional units to do so."

They are objecting not because of their political views but because they are teachers: If political activism becomes "a central goal of the university," warns the open letter, inevitably "it will conflict with education and research. The search for truth can never be subjugated to social or ideological beliefs."

Most worrying to many of the signers was the draft statements' exhortation that all decisions about research must adhere to an overarching creed of racial, social, and climate justice. Not only is such a mandate antithetical to the spirit of open inquiry and academic freedom, but in some cases it is downright incomprehensible.

"If your research on quantum computing is not perceived as promoting climate, environmental, or racial justice," the authors of the open letter ask, "will you be held accountable and your resources re-allocated?"

There was an era, not so long ago, when spirited debate over questions of university policy and politics was an integral part of higher education.

Today, when expressing the "wrong" opinion on a controversial social issue has led to the investigation, censure, suspension, or firing of hundreds of faculty members around the country, it takes moral courage to openly criticize the progressive dogma being pushed by the UMass Boston leadership.

In opinion surveys, nearly 2 in 3 American adults say that they are afraid to honestly express their views. In too many institutions of higher education, illiberal hostility to free speech has grown endemic.

All the more reason, then, to applaud the UMass instructors who have put their names to the open letter challenging the university's misbegotten — but ideologically fashionable — statement.

What the administration proposes, the objecting faculty members write, "would bring serious damage to . . . the demographically and ideologically diverse group of students we serve — particularly those who see education as a means to rise socio-economically."

The professors' letter continues to collect signatures from all UMass Boston departments. It is a tribute to the intellectual integrity of which American higher education remains capable.

Perhaps it is also reason to hope that the woke juggernaut rolling through academia may not be unstoppable.