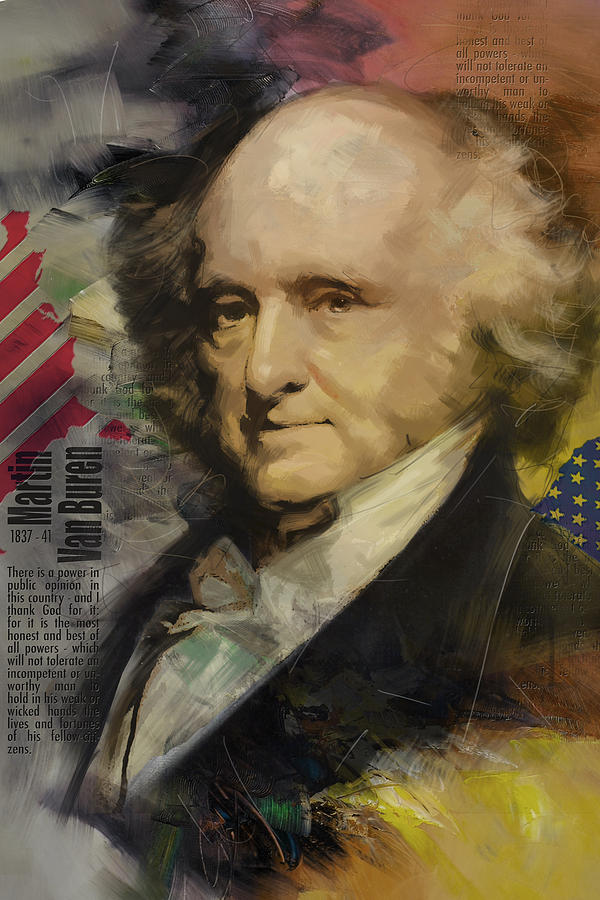 Martin Van Buren, the eighth president of the United States, was something new in America's political life. He was the first president born after the Revolution, the first whose ancestry wasn't British, the first from New York, and the first to win the White House with neither a college education nor a military record.

He is the only president who learned English as a second language — he grew up speaking Dutch in the very ethnic Hudson River village of Kinderhook, N.Y., where his father ran a tavern.

And he almost certainly had more nicknames than anyone else who has reached the pinnacle of American power: He was known as "The Little Magician," "Matty Van," "The Careful Dutchman," "American Talleyrand," "King Martin," "The Enchanter," and "The Red Fox of Kinderhook."

In his day, Van Buren was among the most intriguing, famous, and influential men in US politics. "Six generations ago, it was impossible not to have an opinion about Martin Van Buren," writes historian Ted Widmer. "And those opinions were not for the faint of heart. In certain quarters, Van Buren was the most hated man in America."

Yet today he is barely remembered, except perhaps for his whiskers. In the popular mind, he has been reduced to just another in the string of barely distinguishable one-term presidents between Andrew Jackson and Abraham Lincoln.

Van Buren deserves better than that. No, he wasn't a great president; his four years in the White House were rocky at best. But he was one of the most gifted political architects in our history — arguably the greatest backroom political strategist to reach the White House until Lyndon Johnson, more than a century later.

A member of what was then called the Democratic-Republican Party, Van Buren was a natural connoisseur of power and electoral discipline who created America's first statewide political machine. That machine, known as the Albany Regency, revolutionized the practice of politics in the United States.

Through the innovative use of nominating conventions, patronage appointments, a partisan newspaper, a clear political ideology, and the recruitment of candidates without regard to family lineage, the Regency dominated New York state politics in the 1820s and 1830s.

"I do not believe that a stronger political combination ever existed at any state capital, or even at the national capital," wrote Thurlow Weed, a young journalist who later became an influential publisher and Whig politician.

But Van Buren was just getting started.

Lincoln was the best. Buchanan was the worst. What about the others? In 1821, he moved to Washington as a newly elected senator. Almost at once he set about to replicate on the national level what he had achieved in his home state.

Within seven years he had pulled it off. After John Quincy Adams became president in 1824, Van Buren embarked on a campaign to ensure that Andrew Jackson would win the next election. With single-minded focus, he shaped Jackson's loose network of supporters into a disciplined political party.

The Founding Fathers had regarded the idea of political "factions" with distaste. But to Van Buren, an effective party apparatus had become as indispensable as the locomotive and the industrial printing press, and a vital ingredient for representative democracy.

"Like a 19th-century Vito Corleone, he was always thinking ahead of his enemies," writes Widmer, "forging a new network of families and alliances that would forever redraw the map of power in the United States. Everything he did contributed to the goal of unfurling a new national party." He helped arrange for the launch of a Washington newspaper to oppose the Adams administration. He negotiated behind the scenes to absorb Virginia's old Jeffersonian dynasty into his new organization. He created a network of local committees that reported to state chairmen, and used them to control and disseminate the party's message nationwide. Americans now take such techniques for granted as standard party practice. But it required Van Buren's insight to dream them up in the first place, and their effects, at the time, seemed almost supernatural. There was a reason he was called "The Little Magician." On Election Day in 1828, Jackson and the Democratic Party crushed Adams in a landslide. Four years later, Jackson was reelected by an even larger margin over Henry Clay. Van Buren had permanently transformed the nation's politics. Without much exaggeration, America's two-party system can be described as his most enduring legacy.

Jackson named Van Buren secretary of state in his first term and then made him his running mate for the second. As vice president, he became Jackson's heir apparent, and with Old Hickory's blessing, he was nominated by the Democratic Party to be the next president of the United States. Against a divided field of four Whig candidates, Van Buren cruised to victory. In March 1837, at the age of 53, he became the youngest American president to date.

But the presidency that began with such promise quickly turned sour. Less than two months after his inauguration, the soaring American economy crashed. With remarkable speed, the Panic of 1837 — the first great depression in US history — spread across the country. Banks failed by the hundreds; businesses by the thousands went bankrupt.

A nation that had been awash with money and caught up in a spending and speculation boom suddenly found itself in economic free fall. As prices and profits cratered, unemployment soared. In New York City alone, 20,000 workers lost their jobs.

The cause of the depression is something historians debate to this day. At the time, Democrats blamed the bankers, but countless Americans blamed the Democrats, the party in the White House. Van Buren's reaction only made matters worse. "Believing the economy would improve only â€˜by retrenchment and reform,'" notes presidential historian Richard Pious, "Van Buren cut public expenditures by 20 percent and opposed internal improvements that would have greatly reduced unemployment."

Had the crisis ended quickly, Van Buren might have weathered the storm and fought his way to reelection. But the misery lasted through the 1840 election. Not even the Little Magician could find a spell mighty enough to overcome the iron law of politics that economic suffering is charged to the party in power. Instead, he acquired another nickname: Martin Van Ruin.

The Whig Party, meanwhile, had learned from its experience four years earlier. Van Buren had demonstrated the political effectiveness of message control and a nationalized election strategy, and now the Whigs put those lessons to impressive use.

With William Henry Harrison as their nominee, they ran a spectacularly mendacious campaign, falsely portraying Harrison as a common man of "Log Cabin and Hard Cider" origins and mocking Van Buren relentlessly as a dandified aristocrat. The president didn't stand a chance.

Van Buren was not one of the republic's great chief executives, as nearly everyone would agree, but there is no disputing the indelible mark he left on American politics. He was an early example of the truism that in America, even the humblest kid can grow up to be president.

All it takes is political genius, indefatigable drive, immense ambition, and the gifts of a magician.