The racial decency -- and irony -- of Rutherford Hayes 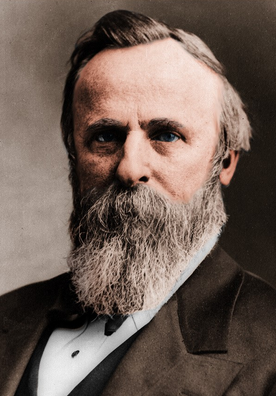 When Rutherford B. Hayes died in 1893, tributes to the 19th president poured in from across the political and social spectrum. Among them was a letter from a youthful black scholar doing graduate work in Berlin, studies that were subsidized by the Slater Fund, an endowment created to promote the education of African Americans.

Hayes, one of the fund's original trustees, had been impressed by the student and persuaded the other trustees to provide financial support.

That young scholar was W.E.B. Du Bois, then unknown but soon to become one of the most renowned intellectuals of the early 20th century. Hearing of the former president's death, he contacted the Slater board to express condolences.

"I am especially grateful to the memory of him, your late head, through whose initiative my case was brought before you," Du Bois wrote, "and whose tireless energy and single-heartedness for the interests of my race, God has at last crowned."

Of the US presidents who served between the Civil War and World War II, Hayes was indeed among the most single-hearted in his concern for the liberty and political rights of black Americans.

And yet the myth long ago took hold that the Republican Hayes became president through a cynical racial betrayal — that to capture the White House, he agreed to eviscerate Reconstruction and turn a blind eye to the suppression of blacks by racist Southern Democrats. So pervasive did this narrative grow over the century following Hayes's death that when Congress in 1995 was asked to appropriate funds for the Hayes presidential library in Fremont, Ohio, some in Congress balked.

"Who determined that it was in the federal interest to have a library for Hayes?" demanded Missouri representative Bill Clay, Sr. The Hayes administration "had a devastating effect on black Americans," he told a reporter. "I'm not saying this guy was totally bad, [but] what he did was incredibly obnoxious and corrupt."

This is grievously unfair to Hayes, who long and earnestly supported the constitutional equality of black Americans. But in the electoral chaos that followed the 1876 election, Hayes was in a singularly weak position. He had lost the popular vote to Democrat Samuel Tilden, who would have no qualms about pulling the plug on Reconstruction.

Following a long and contentious dispute in Congress, Hayes wound up with a one-vote margin in the Electoral College. In exchange for accepting that result, Democrats demanded that the last remaining federal troops in the South be removed — and since they controlled the House of Representatives, they were able to back up their demand by blocking the needed appropriation to fund those troops.

Meanwhile Northern voters, weary of the long-drawn postwar occupation, no longer had the stomach for military intrusion in the South. Hayes was left with no viable option. The best he could do was extract a solemn promise from Southern Democratic leaders that the civil rights of freedmen would be guaranteed. He must have known that pledge wouldn't be honored. Over the next decade, all the progress that had been made in black civil rights was rolled back. In its place rose a regime of Jim Crow apartheid that would last until the 1960s.

The 1876 election was repeatedly invoked in recent months. It provided a historical analogue as Donald Trump was furiously contesting the 2020 election results. But Hayes deserves to be remembered for more than the mutual accusations of voter fraud and miscounting that convulsed US politics for months before he was finally confirmed as president-elect. Amid our current national debate over racial justice, this President's Day weekend is a good moment to recall why Du Bois extolled Hayes's "tireless energy and single-heartedness for the interests of my race."

As a young attorney in pre-Civil War Cincinnati, Hayes acquired a reputation for using his legal skills to protect the freedom of former slaves. In one notable case, he defended Rosetta Armstead, a 16-year-old whose owner had sent her with an agent on a trip from Kentucky to Virginia.

When the travelers transited Ohio, antislavery activists got a local court to declare Armstead free. Her Kentucky master fought back, arguing that under the Fugitive Slave Law, runaways were to be returned to their owners. But Hayes convinced a federal judge that the law didn't apply, since Armstead hadn't run away — she had been brought to a free state with her owner's consent, and had only then asserted her right to liberty.

Democrats accepted Hayes's victory in the Electoral College only on the condition that the last federal troops sustaining Republican governments in the South would be withdrawn. Hayes had long and earnestly supported the equality for black Americans, but he was unable to prevent the end of Reconstruction.

Hayes's antislavery commitment in court was more than matched by his passionate marriage to Lucy Webb, an abolitionist whose parents had fervently opposed slavery. With her approval, he volunteered to fight within weeks of the attack on Fort Sumter, and quickly came to regard the war's fundamental purpose as the defeat of human bondage. "We are at the same high call here today — freedom, freedom for all," he avowed in December 1861. "We all know that is the essence of this contest." Hayes would spend more than four years in uniform and be wounded in battle four times.

As a member of Congress from 1865 to 1867, Hayes steadfastly backed the new Reconstruction measures. As governor of Ohio, he led the fight for ratification of the Fifteenth Amendment against stiff Democratic opposition. He accepted his party's nomination for president in 1876, campaigning on a platform of both North-South reconciliation and black political equality.

But when the returns came in on Election Day, it was clear that Tilden had prevailed in the popular vote. In his diary that night, Hayes wrote that he "talked with Lucy, consoling her." The prospect of returning to private life didn't distress them, but "both of us felt more anxiety about the South — about the colored people especially — than about anything else."

In the end, Hayes won the White House, but it was too late to save Reconstruction. Within two years, both houses of Congress had Democratic majorities. In the words of Ari Hoogenboom, the leading historian of the Hayes administration, the president "never abandoned his commitment to civil rights and to equal educational and economic opportunities for all Americans." But without a critical mass of political support, he could do little more than slow the coming disaster.

Conscientious, honest, moderate, and devoid of racial animosity, Hayes yearned, as he said in his inaugural address, to "forever wipe out in our political affairs the color line." It wasn't to be. America's 19th president was a racial idealist. But in his age as in every age, it takes more than ideals to change the world.