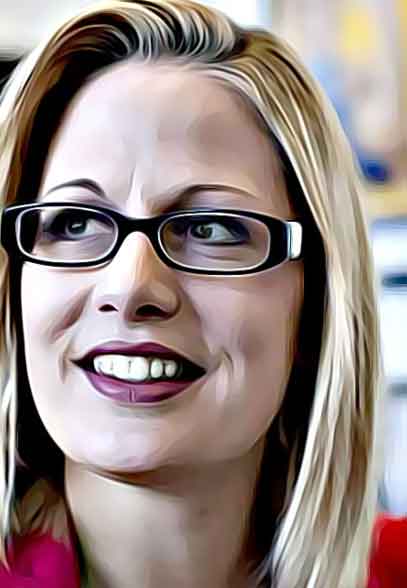 On a wide array of issues, Senator Kyrsten Sinema is as progressive as they come.

The Arizona Democrat is a one-time Green Party activist who has been an ardent champion of LGBTQ rights, an unwavering supporter of abortion access, a proponent of stiffer gun control regulations, and a defender of affirmative action.

Over the past year, her votes in the Senate have aligned with President Biden's position 97.5 percent of the time. In fact, out of 41 major bills and nominations tallied by the website FiveThirtyEight, Sinema has voted with the president on all but one.

But because of that one — her vote last week against eliminating the 60-vote requirement to end a filibuster — Sinema has been denounced and demonized by her fellow liberals and Democrats.

She has been labeled a "traitor" to her "constituents" (Representative Jamal Bowman of New York), a "moral disgrace" (Washington Post columnist Jennifer Rubin), "a sellout" (Senate candidate and former US representative Abby Finkenauer of Iowa), and an "anti-democratic tool" (CBS star Stephen Colbert). She has been excoriated by one MSNBC host for "upholding white supremacy" (Tiffany Cross) and slammed by another as "a menace to the continuation of American democracy" (Keith Olbermann). She has been censured by the executive board of the Arizona Democratic Party.

Yet no one was blindsided or misled by Sinema's vote, which was consistent with the position she has articulated since entering the Senate three years ago. "Whether I'm in the majority or the minority, I would always vote to reinstate the protections for the minority," she said in 2019. "It is the right thing for the country."

In other words, Democrats and progressives are furious not because Sinema shamelessly flip-flopped or put her career ahead of her convictions, but because she wouldn't do so. In the teeth of cruel mockery, open harassment, and the loss of financial and political support, Sinema declined to betray her principles. John F. Kennedy had a term for senators like her. He called them "profiles in courage."

In his Pulitzer Prize-winning book of that title, JFK told the story of eight senators who exemplified what he called "the most admirable of human virtues — courage." The men he profiled — John Quincy Adams and Daniel Webster of Massachusetts, Thomas Hart Benton of Missouri, Sam Houston of Texas, Edmund G. Ross of Kansas, Lucius Lamar of Mississippi, George Norris of Nebraska, and Robert Taft of Ohio — demonstrated their courage in wholly dissimilar ways. Some did so by breaking with their party, others by refusing to switch parties. For some, courage took the form of advocating compromise; others showed their mettle in refusing to yield.

To pundits and politicos on the left who regard Sinema as public enemy number one, the notion that she should be praised for her courage is absurd and offensive. Yet many of them had no trouble extolling Senator Mitt Romney when the Utah Republican voted in 2020 to convict Trump of abuse of power, becoming the first senator in history to support the removal of a president of his own party.

For his vote, Romney was condemned and despised by countless Republicans, who showered him with as much rage as is now being hurled at Sinema from Democrats.

Last year, the John F. Kennedy Library bestowed a Profile in Courage Award on Romney for his integrity and backbone. It ought to do the same for Sinema.

JFK would say: That's not the point.

"Some of these men . . . were right in their beliefs; others perhaps were not," he wrote in the introduction to his book. "Some were ultimately vindicated by a return to popularity; many were not."

He repeatedly drove home that message. For example, in his chapter celebrating Norris, who opposed a popular bill to arm US merchant ships endangered by German submarines, Kennedy wrote: "It is not now important whether Norris was right or wrong. What is now important is the courage he displayed in support of his convictions."

It isn't easy to praise the valor of a political official who fights fearlessly for a cause you despise. But if you admire courage only when it helps your side, you don't really admire courage. Would Kennedy have shared Sinema's view on the filibuster?

No one can say. But he would certainly have applauded her fortitude in standing her ground, and he would have hailed her as a profile in courage.