A short history of presidential grief 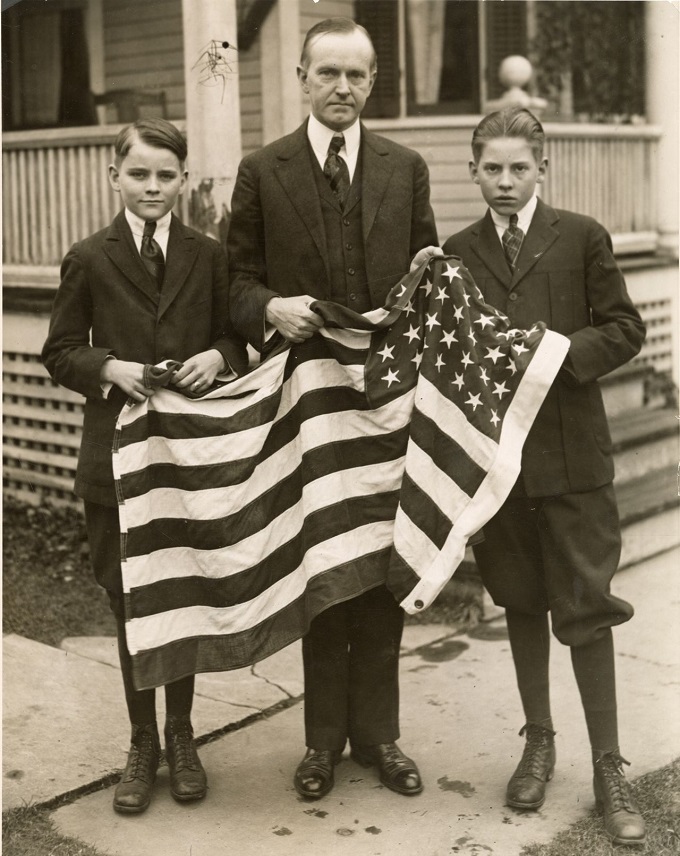 Calvin Coolidge and his sons, Calvin Jr., left, 12, and John, 14, display an American flag outside their Northampton home in July 1920. When the younger boy died four years later, his father said that "the power and the glory of the presidency went with him."

As I watched President Biden's inauguration last week, I couldn't keep myself from wondering how often his mind turned to thoughts of his first wife, Neilia, who died in a car crash in 1972 together with their 1-year-old daughter, Naomi, and of his older son, Beau, who died of cancer in 2015 at the age of 46. I have a wife and two children who are the center of my life, and I cannot imagine trying to carry on as usual if I were to lose any of them, never mind all three.

But Biden did carry on, as so many people do after terrible losses. Indeed, he strongly considered running for president four years ago, telling New York Times columnist Maureen O'Brien that Beau's dying wish had been for him to run for the White House on the grounds that "the White House should not revert to the Clintons and that the country would be better off with Biden values." In the end, of course, he ruled out a 2016 run.

How the private heartache of having buried a wife and two children will affect Biden now that he occupies the most public office in the world, perhaps time will tell. But he is far from the first American president to have experienced such terrible anguish.

In the three years leading up to William Henry Harrison's 1841 inauguration as the ninth president of the United States, he and his wife mourned the deaths of three of their adult sons: William, Jr., who died in 1838; Carter (1839), and Benjamin (1840). Anna Harrison was so deep in mourning that she could not bring herself to travel to Washington for her husband's inauguration. Just 30 days into his term, President Harrison died of pneumonia, compounding his wife's grief even further.

No less tragic were the losses suffered by Franklin Pierce and his wife Jane. The New Hampshire Democrat was in his second term as a US representative when his first child was born, only to die a few days later. Pierce had become a senator when Jane gave birth to a second boy, who died of typhus when he was four. The couple's third child was killed in a grisly train wreck in 1853, just a few weeks before his father's inauguration as the 14th president.

Thomas Jefferson's beloved wife, Martha, gave birth to six children. Five of them preceded their father in death, as did their mother, who died at 33, just a few months after the birth of her last child. The death of his daughter Polly in April 1804 plunged Jefferson into fresh despair. He wrote to his sole surviving child, Patsy Jefferson Randolph, that he yearned to be free of political obligations and to return to his home in Monticello as a simple farmer. Nonetheless, Jefferson was reelected president that fall and served another four years.

In 1924, shortly after Calvin Coolidge (who had become president upon the death of Warren Harding) clinched his party's nomination to run for a full term as president, his teenage son and namesake, Calvin Jr., developed a blister on one of his toes while playing tennis on the White House courts. "Later in the day, young Calvin dosed the blistered toe with iodine and thought no more of it," recounts Doug Wead in All the Presidents' Children , an absorbing history of the first families.

However, within hours septicemia had developed and blood poisoning was coursing through the boy's body. By the time the doctors were made aware of the situation, it was too late to treat the president's son.

Grace and Calvin Coolidge were stunned by the news. The boy's room was turned into a makeshift hospital. The normally stoic Calvin Coolidge walked around in a daze. In a sentimental moment, knowing that his teenage son loved rabbits, he brought one to his bedside to try to cheer him up. "When he was suffering, he begged me to help him," the president later wrote, "but I could not." . . .

In a remarkable interview with journalist John Lambert, President Coolidge sat in his White House office and openly sobbed, weeping unashamedly. "He was such a good boy," the president said pitifully. Coolidge later wrote about his namesake's death in his autobiography, "When he went the power and the glory of the presidency went with him."

Coolidge went on to win the fall election and was a popular and successful chief executive. But his son's death cast a permanent pall. Three years later, still grieving, the 30th president announced that he would not run for reelection in 1928.

Such heart-wrenching tragedies can strike any family, but they have struck the families of American presidents with chilling frequency. Writes Wead:

There is no more remarkable common denominator among American presidents than their early encounters with premature death. Twenty-six children of presidents died before the age of five, and dozens more before they reached thirty. Rutherford B. Hayes had seven children; three died before their second birthday. John Tyler lost three of his adult daughters within a six-year period. . . . William McKinley and Franklin Pierce saw all their children die.

Abraham Lincoln's 11-year-old son Willie died of typhoid fever in 1862, in the midst of his father's presidency. He was the second of Lincoln's four sons to die in childhood: His older brother Edward had succumbed to diphtheria in 1850, at age 3.

Biden is far from the first president in modern times to live through the sorrow of a child's death. Franklin D. Roosevelt, Dwight Eisenhower, Ronald Reagan, George H. W. Bush — all underwent the trauma of burying a young child. So did John F. Kennedy, whose daughter Arabella was stillborn, and whose son Patrick, born prematurely in August 1963, lived for only three days. Kennedy "had been holding the boy's hand when he died at Children's Hospital in Boston," related historian Thurston Clarke in JFK's Last Hundred Days.

As he recounted their son's death to Jackie he fell on his knees by her bed and began sobbing. "There's just one thing I couldn't stand," she told him in a faint voice. "If I ever lost you . . ." He whispered, "I know . . ."

Two days later he wept in her arms while describing the funeral. After recovering his composure he said, "You know, Jackie, we must not create an atmosphere of sadness in the White House, because this would not be good for anyone — not for the country and not for the work we have to do."

The lives of America's presidents are replete with stories of such pain and loss. And just as Biden is only the latest in a long line of presidents to have endured the early death of his children, he is also one of at least nine presidents to have been a widower. In addition to Jefferson, whose wife died 19 years before his presidency, there was Andrew Jackson, whose wife Rachel died of a massive heart attack on December 22, 1828 — just six weeks after his election to the nation's highest office. Martin Van Buren, Chester Alan Arthur, and Theodore Roosevelt were also widowers when they acceded to the presidency. The wives of three other presidents — John Tyler, Benjamin Harrison, and Woodrow Wilson — died while they were living in the White House.

There is no political message in this history. Family tragedy has befallen some of our best presidents and some of our worst, some who were popular and some who weren't, Republicans no less than Democrats (and Federalists no less than Whigs). I don't know to what extent Biden's public career has been shaped by the deaths of his first wife, his small daughter, and his grown son. He is blessed with a gregarious and affable personality, and has made what to all appearances is a very happy second marriage. One week into his administration, no one can say what kind of president he will be.

But on the whole, I would rather have a president who knows from experience how much sadness life can bring than one whose climb to power has been charmed and trouble-free.