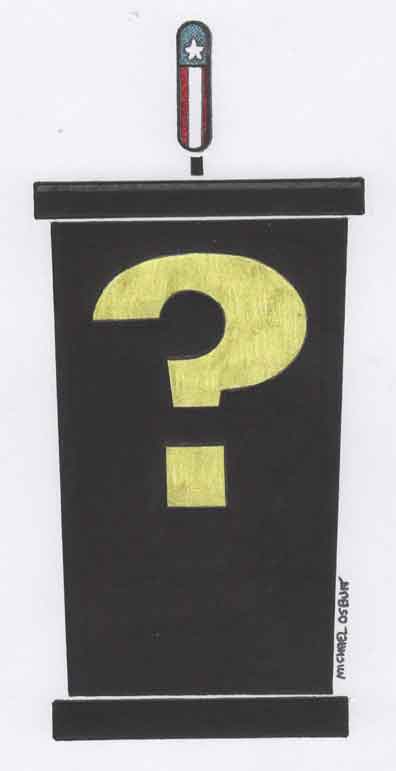 No debates? No great loss.

The Republican National Committee announced this month that it proposes to keep its 2024 presidential candidate out of any debates organized by the bipartisan Commission on Presidential Debates.

According to The New York Times, Republican officials notified the commission of their intention following months of fruitless discussions. "If the change goes forward," noted the Times, "it would be one of the most substantial shifts in how presidential and vice-presidential debates have been conducted since the commission began organizing debates more than 30 years ago."

Maybe so. But who, apart from pundits, politicos, and Saturday Night Live gag writers, will miss the ridiculous spectacles that presidential debates have become?

The dispute between the RNC and the commission grows out of some longstanding objections Republicans have had about the way debates have been handled over the years. GOP officials accuse the commission of being biased toward Democrats and of delaying the first debate until early voting is already underway. The commission, for its part, is frustrated that Republicans do not distinguish between debates during the long primary campaign with those held during the general election campaign between the parties' nominees. It also is irritated that the RNC is inserting itself into negotiations normally conducted directly with the candidates' campaigns.

What to make of this?

The RNC's reasons to prohibit participation in the debates are important. And that's because they fall in line with an important strain of Trumpism: a claim to being the victims of unfair treatment. To be fair, evidence does show that some important cultural institutions, including the news media, are more likely to be populated by Democrats than Republicans, but conflict between presidential campaigns and debate organizers about the journalists who moderate the debates is hardly one-sided — or new. . . . But this move represents the Trumpist Republican Party only further rejecting established institutions and democratic practices.

Grant all that. So? Will politics in the world's oldest democratic republic be diminished if this particular tradition fades away? Senator Mitt Romney, the GOP presidential nominee in 2012, is quoted by the Times as saying it would be "nuts" for the party to end its participation, since "the American people want to hear from the nominees of the two respective parties." The debates, he says, give voters "a good chance to understand their views and to see them in a high-pressure situation."

That's the idealistic, civics class view of the matter. But it bears little relation to what presidential debates have become.

Let's face it: America's quadrennial presidential debates have grown ludicrous and embarrassing. They long ago devolved into shallow "gotcha" contests, prime-time entertainments designed not to probe candidates' thinking or to better understand their governing philosophy and proposals, but to elicit catchy soundbites — either mocking put-downs rehearsed in advance or the unforced error of a gaffe.

"It has been decades since a presidential 'debate' involved any actual debating," I wrote during the Trump v. Biden contest. "The candidates don't seek to persuade voters with arguments and evidence. The moderators aren't interested in facilitating real discourse. And the vast majority of viewers who tune in do so not to learn more about each candidates' policies, but to root for one and sneer at the other."

More than 30 years ago, the renowned columnist Tom Wicker lamented the pathetic quality of presidential debates . "These high-stakes showdowns are gushing fountains of misinformation, disinformation, posturing, prevarication, and puerility," he observed. A few months earlier, CBS newsman Walter Cronkite had voiced a similar indictment, telling an audience at Harvard's Kennedy School of Government that the debates were "part of the unconscionable fraud that our political campaigns have become." If that's what Wicker and Cronkite thought about the showdowns that involved Jimmy Carter, Ronald Reagan, the elder George Bush, and Bill Clinton, just imagine what they would have made of debates like those four years ago between Trump and Biden?

Instead of serving to advance the candidates' ideas by allowing them to explain to voters their different approaches on key issues, modern TV debates are crafted to make depth, nuance, and reasoned argumentation impossible. Real debates, like those organized by the organization Intelligence Squared , don't limit participants to 60- or 90-second responses or have silly rules like the right to respond anytime a debater's name is mentioned. Nor do real debates purport to cover all issues: They require competitors to focus on a specific question and debate it in depth, demonstrating that they have thought seriously about the topic and can explain why they take the position they do. Before and after every Intelligence Squared debate, the audience votes on the resolution before the house. The side that swayed the most audience members between the two votes is declared the winner.

But how many minds are changed during our cringe-worthy presidential debates?

I have periodically suggested fixes to the presidential debate format — recruiting moderators who are not TV anchors or journalists, for example, or eliminating moderators altogether, or asking candidates to read and discuss an important book. One notion I put forward in 2020 was to have candidates workshop a hypothetical crisis:

How would a president react in an emergency? Obviously we can't be certain in advance, but candidates could be confronted with an unexpected scenario, and forced to "respond" in real time: An Air Force fighter crashes over the Persian Gulf, and an Islamist terror group is taking credit. The "Big One" has struck along California's San Andreas fault, leaving Pomona and San Bernardino in ruins. Cyber-anarchists simultaneously strike Bank of America, Chase, and Capital One with a paralyzing computer virus, unleashing havoc in financial markets and triggering a 1,000-point stock market selloff. What would the candidates do first? To whom would they reach out? What orders would they give? What choices would they face? What would they tell the nation?

Of course it'll never happen. Presidential campaigns will not agree to eschew the mud-wrestling in favor of wrestling with policy tradeoffs, strategic analysis, and governing principles. The last thing campaign tacticians, fundraisers, and social-media coordinators want is for their candidates to drill down into complex public policy questions, giving honest answers that are bound to upset some voters and handing opponents fodder for criticism.

We don't need to keep staging these travesties. White House hopefuls aren't required to debate their opponents, after all, and most never did. Andrew Jackson didn't square off against John Quincy Adams, William McKinley didn't go toe-to-toe with William Jennings Bryan, and Harry Truman never got on the stage with Thomas Dewey. From George Washington's day through Dwight Eisenhower's, there were no presidential debates. It wasn't until 1960, when Kennedy and Richard Nixon agreed to four TV encounters, that the first presidential debates were held. It was an admirable experiment, but it has failed.

The time has come to dissolve the Commission on Presidential Debates, and do away with one of the least edifying, most demeaning farces in American political life.