The war to liberate Iraq was just, even if it's no longer popular to say so 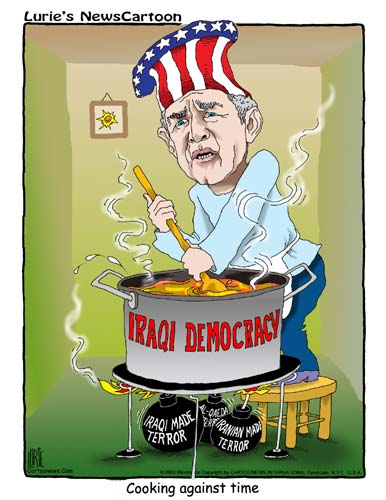 When going to war against Iraqi dictator Saddam Hussein was popular, Joe Biden was for going to war.

In the fall of 2001, when he was chairman of the Senate Foreign Relations Committee, Biden argued that war with Iraq was inevitable and that the United States should "tighten the noose" around Saddam's neck and assemble a coalition to depose him.

In a speech early in 2002, he said it was imperative "to end the regime one way or another" and called Saddam's overthrow essential to winning the war on terror. That fall, voting to authorize George W. Bush to order military action in Iraq, Biden declared that "Saddam must be dislodged from power." In February 2003, he reiterated his support: "I supported the resolution to go to war. I am NOT opposed to war to remove weapons of mass destruction from Iraq. I am NOT opposed to war to remove Saddam."

As the US attack got underway in March, Biden strongly endorsed the operation. "I support the president. I support the troops," he said on CNN. Four months later, his resolve hadn't weakened. "Some in my own party have said that it was a mistake to go to Iraq in the first place and believe that it's not worth the cost," Biden told the Brookings Institution in July 2003. "But the cost of not acting against Saddam, I think, would have been much greater."

Today, running for president in a party that has moved sharply to the left, Biden is busily rewriting history. He falsely insists that he opposed the Iraq war "from the very moment" it started. During Tuesday's Democratic debate in Des Moines, he claimed, also falsely, that the Bush administration had promised "they were not going to go to war."

Biden's mendacities do him no credit. Like the overwhelming majority of Americans in 2003, he was in favor of the expedition to oust Saddam. Most Senate Democrats voted for the war resolution; besides Biden, they included John Kerry, Hillary Clinton, Diane Feinstein, Harry Reid, and Charles Schumer. There was a strong bipartisan consensus that Saddam was a deadly, destabilizing menace who had to be ejected. Bill Clinton had signed the Iraq Liberation Act, making regime change in Iraq a goal of US policy, in 1998 — two years before Bush was elected president.

The Democratic Party has long since turned against the Iraq war, of course. Bernie Sanders, who voted against the war in the House of Representatives, routinely labels it "the worst foreign policy blunder" in US history. He hopes to deploy Biden's support for the war as a cudgel against the former vice president, much as Barack Obama did against Hillary Clinton in 2008. But it will gain Biden nothing to dissemble about his own record.

Biden would be on stronger ground reminding Democratic voters that Sanders's radical approach to foreign policy — from his dovishness toward foreign aggressors to his support for socialist dictators — makes him unsuitable to be commander-in-chief. Tellingly, the Trump campaign last week singled out Sanders for criticism on national security grounds. It warned that he "can't be trusted to defend American lives" and said he pushes "a naive, dangerous policy of appeasement toward Iran." Biden might not use such strong language about a fellow Democrat. But he has every reason to remind voters that Sanders's extreme views are incompatible with effective American leadership.

Then again, if Biden cannot tell the unpopular truth about Iraq, how likely is it that he will buck his party's hard progressive base on foreign policy generally?

That unpopular truth is this: The war to oust Saddam was justified, and the Democrats who supported it were right to do so. The Iraqi dictator's WMD stockpiles turned out not to be as extensive as Western intelligence services had believed, but that didn't diminish Saddam's malignance or the threat he posed. He had committed ghastly crimes against humanity — invading neighboring countries, gassing Kurdish civilians by the thousands, engaging in torture on a terrifying scale, sponsoring international terrorism, and attempting to assassinate a US president.

The Bush administration's blunder wasn't that it invaded Iraq, but that it mishandled the immediate aftermath of Saddam's removal and was unprepared for the long, bloody insurgency that followed. Yet after Bush's 2007 troop "surge," the course of the war shifted dramatically for the better — so much so, that by the time Bush turned the Oval Office over to Obama, violence was down 90 percent and Iraqis were being governed by elected leaders. "A democratic Iraq is emerging," reported Newsweek in early 2010. On its cover the magazine proclaimed: "Victory at Last." Biden told CNN's Larry King that Americans would regard Iraq as "one of the great achievements of this administration."

But then, tragically, Obama squandered Bush's victory. In 2011 he precipitously pulled American troops out. Iraq's fragile young democracy was left to fend for itself. In the vacuum caused by the US withdrawal, jihadists calling themselves Islamic State proclaimed a "caliphate" — plunging Iraq and much of Syria into chaos and genocide. Eventually Obama was forced to send American troops back to Iraq in order to preserve the country from collapse.

As in every war America ever fought, tragic mistakes were made in Iraq. But America's determination to end Saddam's reign of terror was unquestionably a worthy one. An international coalition led by the United States, with broad Republican and Democratic backing, ended the reign of a genocidal tyrant. Joe Biden was right to support the war that liberated Iraq, even if today he lacks the conviction to say so.