Freedom of association and the Big Tech purge 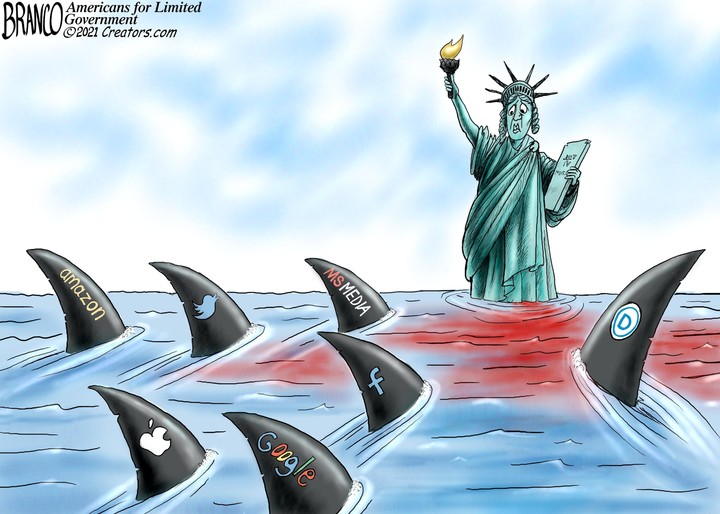 In a ruthless display of muscle last week, America's Big Tech companies banished President Trump and many of his fervent supporters from social media, and they did it without even breaking a sweat.

On Thursday, one day after a pro-Trump mob attacked the US Capitol, Facebook announced that it was suspending Trump's account for as long as he remains in the White House.This month, Twitter permanently cut off Trump, whose followers on the platform numbered more than 88 million. Over the weekend, Twitter shut down tens of thousands of additional accounts that it claimed supported the far-right QAnon conspiracy fringe and blocked the accounts of some prominent Trump loyalists.

Meanwhile, the other tech giants moved to kill Parler, a right-leaning Twitter competitor to which Trump supporters had been flocking. Google and Apple removed Parler from their app stores. Then Amazon administered the coup de grĂ˘ce: It revoked Parler's contract with Amazon Web Services. Deprived of access to the cloud-hosting service, Parler was forced offline. The joint assault was "devastating," Parler CEO John Matze said. "They made an attempt to not only kill the app, but to actually destroy the entire company."

The tech behemoths claim they acted to prevent Trump, Parler, and their loyalists from inciting violence. They point to recent posts that contained death threats or gave advice for smuggling guns into Washington for the "Stop the Steal" rally that led to the rioting at the Capitol.

Yet social media have long been notorious for all kinds of hateful, slanderous, violent, or criminal rhetoric from every fringe of the political spectrum. Big Tech never before engaged in such a sweeping crackdown.

But even if the tech behemoths can be accused of a glaring double standard, or of buckling to political pressure from Congress or the media, that doesn't change the fact that they are private companies. They are not public agencies, regulated utilities, or places of public accommodation.

As long as no fraud or force is used, as long as no one is cheated and no contract breached, they should have the widest conceivable latitude in choosing whom to do business with. Who is entitled to a Twitter account? That's for Twitter to decide. What apps can be listed on Google Play? That's up to Google. Which companies or platforms should be kept online by Amazon's cloud servers? That's a determination for Amazon.

Iam not making a point about Big Tech. I am making an argument about business and freedom of association. I am defending the right of any private company — Twitter and Amazon, yes, but also Home Depot and Office Max — to deny their services to any other company or organization for any lawful reason.

f Starbucks chooses not to sell coffee to the Republican National Committee or if Dell is unwilling to supply laptops to Planned Parenthood, no outside force should have the legal authority to make them do otherwise. Of course, those are far-fetched examples: Most vendors will always be eager to sell to any buyer willing to pay. But it is important to defend, in theory, the right of businesses to withhold their products when they wish to do so. Because that right doesn't always remain theoretical.

An elaborate skein of civil rights laws prohibits companies from discriminating on the basis of race, sex, ancestry, and religion. But antidiscrimination rules don't require merchants or service providers to do business with, say, neo-Nazis or Communists. An advertising company is under no obligation to take on a rabidly pro-Trump client — or a rabidly anti-Trump client. Neither, for that matter, is a catering company or a sign-painting company.

Again: Under normal circumstances, most companies seek to grow their customer base, not restrict it. Markets tend to punish businesses that discriminate for non-economic reasons. But the principle is vital. Private companies, so long as they don't engage in illegal discrimination, get to make their own decisions and must live with the consequences.

Is Big Tech's purge of Trump and Parler hypocritical? Certainly. Does it reflect a desire to curry favor with the Democrats poised to control the executive branch and both houses of Congress? Undoubtedly. Do conservatives who accuse Twitter, Amazon, and the others of anti-conservative animus have a valid point? Absolutely.

But the bottom line remains: The tech companies are private.

And whom they do business with is up to them.