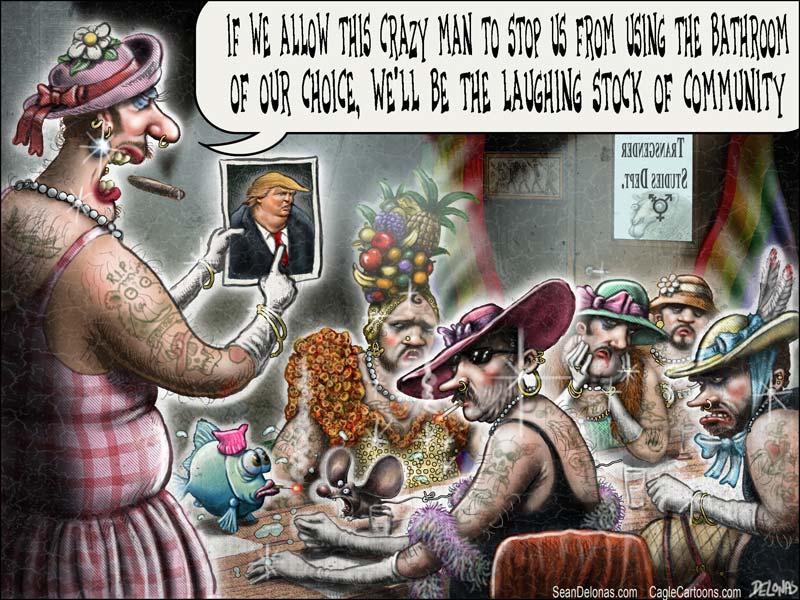 Here are several questions for biologists and medical professionals: If a person is found to have XY chromosomes (heterogametic sex), does a designation as female on his birth certificate, driver's license or Social Security card override the chromosomal evidence?

Similarly, if a person is found to have XX chromosomes (homogametic) does a designation as male on her birth certificate, driver's license or Social Security card override the chromosomal evidence? If you were a medical professional, would you consider it malpractice for an obstetrics/gynecology medical specialist, not to order routine Pap smears to screen for cervical cancer for a patient who identifies as a female but has XY chromosomes?

If you were a judge, would you sentence a criminal, who identifies as a female but has XY chromosomes, to a women's prison? A judge just might do so. Judge William Pryor of the U.S. Court of Appeals for the Eleventh Circuit focused on a Florida school district ruling that a transgender "boy," a person with XX chromosomes, could not be barred from the boys' restroom. Pryor suggested students shouldn't be separated by gender at all.

Fear may explain why biologists in academia do not speak out to say that one's sex is not optional. Since the LGBTQ community is a political force on many college campuses, biologists probably fear retaliation from diversity-blinded administrators. It's not just academics and judges who now see sex as optional.

One transgender LGBTQ activist filed a total of 16 complaints against female estheticians, with the British Columbia Human Rights Tribunal after they refused to wax his male genitals. He sought financial restitution totaling at least $32,500. One woman was forced to close her shop.

Fortunately, the LGBTQ activist's case was thrown out by the British Columbia Human Rights Tribunal, and he was instructed to pay $2,000 each to three of the women he attacked.

The LGBTQ activist is not giving up. He is now threatening to sue gynecologists who will not accept him as a patient.

In 2012, an evangelical Christian baker in Colorado was threatened with jail time for refusing to bake a wedding cake for a same-sex marriage ceremony. When Christian bakery owner Jack Phillips won a landmark (7-2 decision) U.S. Supreme Court case in June 2018 over his refusal to make a wedding cake for a gay couple based on his religious convictions, he thought his legal battles with the state of Colorado were over.

But now Phillips, owner of Masterpiece Cakeshop in Lakewood, Colorado, 24 days after the U.S. Supreme Court ruled in his favor, faces a new court fight. This fight involves a lawyer who asked him to bake a cake to celebrate the anniversary of her gender transition. There are probably many bakery shops in and around Lakewood, Colorado, that would be happy to bake a cake for homosexuals; they are simply targeting Phillips.

For those in the LGBTQ community, and elsewhere, who support such attacks, we might ask them whether they would seek prosecution of the owner of a Jewish delicatessen who refused to provide catering services for a neo-Nazi affair. Should a black catering company be forced to cater a Ku Klux Klan affair? Should the NAACP be forced to open its membership to racist skinheads and neo-Nazis? Should the Congressional Black Caucus be forced to open its membership to white members of Congress?

If you're a liberty-minded American, your answers should be no.