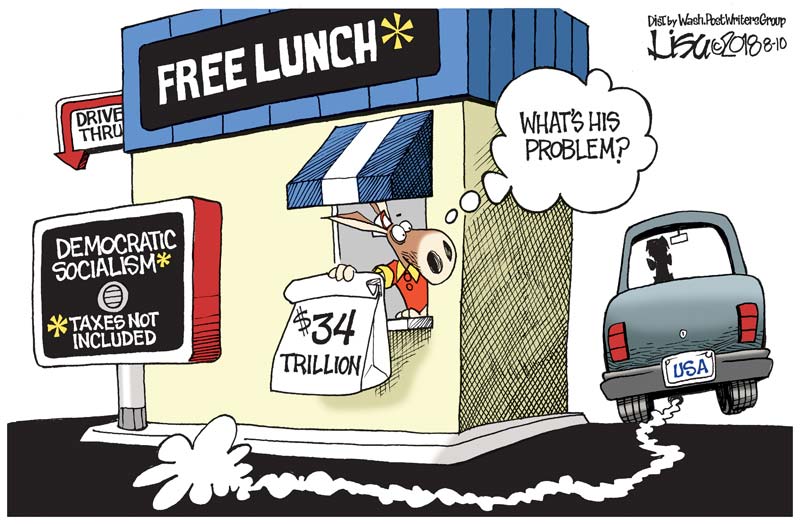 Presidential contenders are in a battle to out give one another. Senator Elizabeth Warren proposes a whopping $50,000 per student college loan forgiveness. Senator Bernie Sanders proposes free health care for all Americans plus illegal aliens. Most Democratic presidential candidates promise free stuff that includes free college, universal income, "Medicare for All" and debt forgiveness.

Their socialist predecessors made promises too.

Hitler even promised, "In the Third Reich every German girl will find a husband."

China's Mao Zedong promised democratic constitutionalism and the dream that "farmers have land to till." These, and other promises, gave Mao the broad political support he needed to win leadership of the entire country in 1949.


Socialism promises a utopia that sounds good, but those promises are never realized. It most often results in massive human suffering. Capitalism fails miserably when compared with a heaven or utopia promised by socialism. But any earthly system is going to come up short in such a comparison.

Mankind must make choices among alternative economic systems that actually exist. It turns out that for the common man capitalism, with all of its alleged shortcomings, is superior to any system yet devised to deal with his everyday needs and desires. By most any measure of human well-being, people who live in countries toward the capitalistic end of the economic spectrum are far better off than their fellow men who live in countries toward the socialist end. Why?

Capitalism, or what some call free markets, is relatively new in human history. Prior to capitalism, the way individuals amassed great wealth was by looting, plundering and enslaving their fellow man. With the rise of capitalism, it became possible to amass great wealth by serving and pleasing your fellow man.

Capitalists seek to discover what people want and produce and market it as efficiently as possible as a means to profit. A historical example of this process would be John D. Rockefeller, whose successful marketing drove kerosene prices down from 58 cents a gallon in 1865 to 7 cents in 1900.

Henry Ford became rich by producing cars for the common man. Both Ford's and Rockefeller's personal benefits pale in comparison to the benefits received by the common man who had cheaper kerosene and cheaper and more convenient transportation.

There are literally thousands of examples of how mankind's life has been made better by those in the pursuit of profits. Here's my question to you: Are the people who, by their actions, created unprecedented convenience, longer life expectancy and a more pleasant life for the ordinary person — and became wealthy in the process — deserving of all the scorn and ridicule heaped upon them by intellectuals and political hustlers today?

In many intellectual and political circles, the pursuit of profits is seen as evil. However, this pursuit forces entrepreneurs to find ways to either please people efficiently or go bankrupt. Of course, they could mess up and avoid bankruptcy if they can get government to bail them out or give them protection against competition.

Nonprofit organizations have an easier time of it. As a matter of fact, people tend to be the most displeased with services received from public schools, motor vehicle departments and other government agencies. Nonprofits can operate whether they please people or not.

That's because they derive their compensation through taxes. I'm sure that we'd be less satisfied with supermarkets if they had the power to take our money through taxes, as opposed to being forced to find ways to get us to voluntarily give them our money.