What price free speech? The legacy of the Rabin assassination

The legacy of the Rabin assassination


IT DIDN'T TAKE LONG for the rumbling to start.

As soon as Israeli Prime Minister Benjamin Netanyahu affixed his signature to the Wye River Memorandum, the outrage among his erstwhile allies in Israel's right wing started to bubble. And as soon as the angry demonstrators started to hurl epithets like "traitor" at the man that most of them had voted for in 1996, the counter- attack against the protesters began to roll. Everyone from Israel's loose- lipped President Ezer Weizman to the head of the Anti-Defamation League, admonished the Jewish world: Angry words helped kill Yitzhak Rabin, they said. 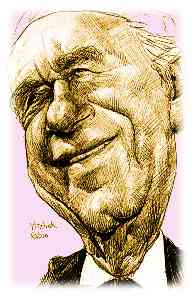 That this episode occurred only days before the third anniversary of the murder of Yitzhak Rabin (z'l) made the irony complete. Accused unfairly three years ago of leading a campaign of "incitement" which led to murder (as Rabin's bitter widow alleges to this day), Netanyahu is now the putative victim of hate speech from his own camp.

Elsewhere, the brutal murder of a gay man by bigots and the cold-blooded assassination of Jewish doctor who performed abortions (presumably by a "right to life" fanatic) outside of Buffalo, New York, has also put the question of hate speech back on the front burner.

The ADL, in particular, has worked hard to pass hate crime legislation around the country which would create a system to statistically monitor crimes that can be linked to bias as well as to treat the perpetrators more harshly. I'm all in favor of keeping official tabs on prejudice as it is manifested in criminal behavior. Where I part company with the conventional wisdom of the day which favors hate crime laws, is the notion that it is worse to be beaten, robbed or murdered if it is a result of hate as opposed to other criminal motivations.

The focus of the criminal justice system should be the crime, not the ideas of the criminal. Murder is murder and should be punished severely (including the use of capital punishment where appropriate) whether the killer is a bigot or not. By saying hate crimes are worse than other criminal behavior, we are setting a troubling precedent which can only serve to furtherdivide society.

But the question with the hate crimes committed in Wyoming and Buffalo -- as with the murder of Rabin and threats against Netanyahu -- is how does the creation of an "atmosphere" of anger on a specific issue lead directly to violence.

Those who loosely claimed that Oslo wasn't merely wrong and a dangerous risk but a betrayal which could legally be prevented through violence may not have envisioned Yigal Amir pulling the trigger. Nor do most abortion foes support violence against abortion providers. But fanatics are always prepared to draw extreme conclusions. That's the problem with moral absolutes. Once you buy into an apocalyptic scenario, the road to madness is open.

The rabbi who pronounces Rabin or Netanyahu a moser or rodeph -- types of criminals who are liable to execution under Jewish law -- or the priest who pronounces a doctor a murderer -- needs to be reminded of Justice Oliver Wendell Holmes' famous dictum in the 1919 court case Schenk v. United States:

"The most stringent protection of free speech would not protect a man in falsely shouting fire in a theater and causing a panic..."

FREE SPEECH FOR ME BUT NOT FOR THEE

But those who campaign about hate speech also have to be careful. Free speech is one of our most precious freedoms and sacrificing freedom in the name of order or safety is the business of tyrannies not democracies. Moreover, they need to remember the less famous second part of that Holmes quote: "The question in every case is whether the words used are used in such circumstances and are of such a nature as to create a clear and present danger..."

In other words, if you are going to accuse someone of inciting violence, you had better be able to prove the connection between words and bullets. Otherwise, all you are doing is suppressing opinions in the grand tradition of "free speech for me, but not for thee," as writer Nat Hentoff memorably put it. Listen to the rhetoric from the Jewish left about anyone who questioned Rabin's policies and you know exactly what Hentoff was talking about.


The murder of Rabin has also generated its own genre of conspiracy theories. Three recent books about Rabin and the murder run the gamut.

At one extreme is Murder In The Name of God: The Plot To Kill Yitzhak Rabin, by Michael Karpin and Ina Friedman (Metropolitan Books, 1998). Karpin and Friedman give a lot of interesting inside information about Yigal Amir and his pals on the extreme right and the incendiary talk about permissible murder that was rife among extremists after the signing of Oslo in 1993. But they are too quick to accept stock answers about the wild card in the murder: Avishai Raviv who was a government agent/agent provocateur who egged on Amir to murder and helping to organize the most extreme anti-Rabin excesses. Karpin and Friedman have a political agenda that colors virtually every page: demonizing Netanyahu and all who opposed Oslo.

They make virtually no distinction between political opposition to the Labor government and murderers. Their goal -- like that of the extreme right is -- kulturkampf -- delegitimization of political foes.

At the other end of the spectrum is a far worse book called Who Murdered Yitzhak Rabin by Barry Chamish (Feral House, 1998) Its publisher is the source of books which, among others, accuse the Federal government of the Oklahoma City bombing. Enough said. The book and its author are off the deep end.

Recommended reading for those who like to learn more about Rabin is Dan Kurzman's "Soldier of Peace: The life of Yitzhak Rabin (Harper Collins, 1998) .

This is not a critical or historically authoritative account of Rabin's life.

It is openly admiring and has the fault of looking at historical controversies only from Rabin's point of view (such as his involvement in the tragic "Altalena" incident in which Rabin ordered his soldiers to fire on fellow Jews). But it is also highly readable and informative, particularly when it comes to Rabin's prickly personality. Kurzman tells us that Rabin never tried to win over his critics or to demonstrate sensitivity for their concerns. He didn't make a distinction between the majority and the extremists.

As Kurzman writes, "Rabin's habit of dismissing someone's opposing view with a sharp jerk of his hand was reflected verbally in his sarcastic, sometimes brutal remarks."

Consensus was not his goal.


And that's what brings us back to Benjamin Netanyahu. As he attempts to lead Israel to the culmination of an Oslo treaty that he never supported, he has come to the realization that he must unite the entire country behind his policies. Unlike Rabin, who felt he could govern without winning over Israelis that didn't vote for his coalition, Netanyahu knows he cannot dismiss the other half of Israel.

This past weekend I listened to Dore Gold, Israel's U.N. Ambassador and Bibi advisor explain the Wye agreement to a skeptical audience at the Zionist Organization of America dinner in New York City. Gold told them that in spite of the flaws of Oslo, Israel's government must try to bridge the divide between the left and the right -- what he called -- the "patriots of peace and the patriots of security." He indicated that the Netanyahu strategy was "to build a national consensus" on those issues on which the overwhelming majority of Israelis agreed like Jerusalem.

That ruled out sticking to the Likud platform in spite of the fact that Netanyahu and Gold both seem to regard Oslo as a path to disaster.

As much as hate speech must be condemned, leaders also have a responsibility to try to unite the nation. And as dissatisfying as that may be to partisans who agreed with Netanyahu's criticisms of Oslo or those who think Rabin's critics should be silenced, finding that middle ground may be the bottom line for domestic peace in

JWR contributor Jonathan S. Tobin is executive editor of the Connecticut Jewish Ledger. He was the recipient of the American Jewish Press Association highest award: First Place in The Louis Rapoport Award for Excellence in Commentary and Editorial Writing. The Rapoport award is named for the longtime editor of the Jerusalem Post and was given to Mr. Tobin at the AJPA's 1997 Simon Rockower Awards dinner at Cleveland on June 18, 1998.