The importance of being Bibi

AFTER ALL THE STURM and drang of the last couple of weeks, Israeli Prime Minister Benjamin Netanyahu's triumphant tour of New York and Washington seems a bit anti-climactic.

President Clinton and Secretary of State Madeleine Albright had felt sure Netanyahu was too unpopular among American Jews to resist pressure for concessions in exchange for empty Palestinian promises. But Clinton and Albright were obvious and maladroit.

Their ultimatum was something no one — outside of the far left of the Jewish spectrum —- could support. And Hillary Clinton's pose as the patroness of Palestinian statehood, alienated even those Jews who are not fond of Netanyahu. The only possible course of action for Netanyahu in the face of this barrage was to stand fast. 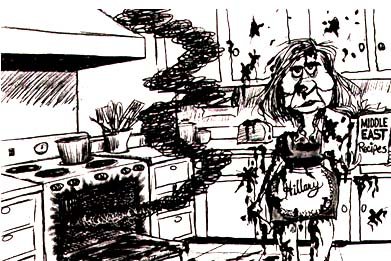 And, at least for the moment, that is what he has done.

The result was not only a boost in his domestic standing but in his support from American Jews. As long as Israel is being wronged — and despite all the spin coming out the Bibi-haters within the Jewish world, Israel was atrociously mistreated in the negotiations — Jews everywhere want to see Israel's prime minister show some spine. Bibi did and he has been justly rewarded for his display of backbone. Polls back in Israel show him with a solid lead over all potential challengers including Labor hopeful Ehud Barak.

But, having successfully rallied mainstream American Jewish leaders and the rank and file behind his position against an American diktat, I am still wondering where he is heading.

In the course of his campaign against U.S. pressure, Israel's government made a powerful case against continuing the process along its current lines. The Palestinians are not observing the Oslo accords. They haven't changed their Covenant. They allow Hamas terrorists to organize openly and march in the streets of PA territory. Their own heavily armed PA "police force" has tens of thousands more soldiers than the Accords allowed. They don't extradite terrorists and worst of all, they foment violence themselves. A peace partner who uses violence at every turn of the negotiations is no peace partner. That's the problem.

If Arafat and the PA were truly interested in peace and had won the trust of the people of Israel, then the debate about percentages of land would be meaningless and unnecessary. But since the PA is so obviously uninterested in peace, every percent means danger and possible lost Jewish lives in future conflicts. And given the strategic threats from the rest of the Arab world — including friends like Egypt who are armed to the teeth and carrying on war games aimed at the country to their east — Israel cannot afford to pretend it is living in Shimon Peres' "New Middle East" fantasy land.

But since Netanyahu is committed to the peace process, the question is, what will he accept as the price to pay for continuing the process? Having made such a fuss about 13.1 percent more land to be handed over to Arafat, Inc., how could he now credibly agree to it? Since the dynamic of this process is that "progress" is only made when Israel makes concessions and nothing is ever required of the Palestinians (who sell the same pledges about terrorism over and over again like a used rug), sooner or later, Bibi has to fold.

Having invested himself in this dubious process with the surrender of Hebron and countless other concessions for which he has been given little or not credit, Netanyahu is bound to keep giving.

My question is, how will he do it without embarrassing all of the American Jews who have finally stood up for him? How can he agree to 13.1 or something like it in exchange for nothing without making the events of the past month an empty farce? Can this man who so many have dismissed as shallow, actually have the courage to change the course of the process and transform it into one which is actually based on reciprocity? Or will the next act of this play be a dispiriting repeat of past bravado followed by shameless retreat? Just like his American counterpart, Netanyahu is a man whom many believe has no core beliefs and no objective other than re-election and power. Bibi has called Clinton's bluff.