Politics ‘98: By their enemies shall ye know them


LIKE IT OR NOT, the election season is upon us. Though there is little excitement, either locally or nationally, about the races for the U.S. Congress, it is still important for friends of Israel to keep track of things on the Hill.

The Arab Hall of Fame and Shame

American Jews and other friends of the Jewish state are perpetually fretting that turnover and media bashing will cause Congress to abandon Israel. It hasn't happened yet, as pro-Israel sentiment continues to be strong. Indeed, Israeli Prime Minister Benjamin Netanyahu has successfully used Congressional backing for Israel to counter Clinton Administration pressure. 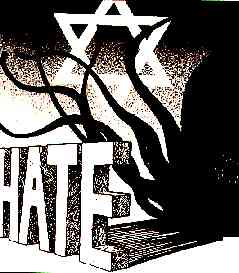 Another concern has been the rising power of the Arab-American community. Nowadays, Muslims are easily as numerous as Jews in the U.S. and are using their clout to try and change the balance of power in Congress.

Those who are wondering what Arab-Americans are thinking about this election can do no better than read the latest issue of the Washington Report on Middle East Affairs. The Washington Report is a glossy monthly which has reliably put forward the opinions of Washington's Arabist lobby for years. It is connected with the more moderate as well as the more radical (pro-Hamas) Arab-American organizations.

In the September issue of Washington Report, the magazine published a "Hall of Fame and Shame," by former Foreign Service officer Shirl McArthur, which rated the current record of all members of the Senate and House on the Arab-Israeli dispute, grading each member of Congress on ten issues.

McArthur characterized her rating system by saying that each black mark against a member was "an action against U.S. and for Israeli interests in the Middle East." Floor votes were not included because McArthur feels that sponsorship of "certain anti-Arab resolutions seem to be a better gauge of a member's true intent."

Those ten indicator issues say a lot about "moderate" Arab opinion as represented by this magazine. For example, one of the key issues indicating whether a member was pro-Arab or not was whether they "co-sponsored the march 1998 resolution calling for an international tribunal to try Saddam Hussein for crimes against humanity" and urging the administration to take steps to assure that Saddam is "brought to justice." In other words, in their view, to be against the butcher of Baghdad is to be anti-Arab!

Other potential black marks against members were support of sanctions against Iran and Libya, support for the unity of Jerusalem, as well as condemnations of terrorism and Palestinian non-compliance with the Oslo accords.

Interestingly, the letter circulated by Rep. Sam Gejdenson (D-CT) which tacitedly supported Administration pressure on Israel, also counted as a bad deed in the eyes of the Arab lobby because of it supported the concept of Israeli security.

Whatever one might think of these indicators (pro-Israel groups would grade members differently and on very different issues), it is interesting to see who Israel's enemies like and dislike. It is also interesting to note that Arab heros and villains were spread evenly among both Democrats and Republicans.

Who is the biggest Zionist in the U.S. Senate according to the Arab lobby? With ten Jews there, you would think it would have to be one of them. But if you thought that, you'd be wrong. The number one Zionist is Sen. Al D'Amato of New York, who scored eight out of a possible ten black marks against Arab interests. Number two is the Senate's only Orthodox Jew, Connecticut's Joe Lieberman who scored seven.

How did the other Jews in the Senate do? California Democrats Barbara Boxer and Dianne Feinstein each scored only two black marks, as did Carl Levin (D- Michigan) and Paul Wellstone (D-MN). Wisconsin Democrats Herb Kohl and Russell Feingold each got three black marks. Oregon's Ron Wyden (D) got four while Frank Lautenberg (D-NJ) and Arlen Specter (R-PA) each earned five.

Among the pro-Arab heros in the House with perfect records are some familiar anti-Israel faces such as House Minority Whip Rep. David Bonior (D-MI) and Rep. Sonny Callahan (R-AL).

Ernest Istook (R-OK) has earned the animosity of most Jewish groups because of his "Religious Freedom Act" which promotes school prayer but he is apparently more popular with the Arab lobby as demonstrated by his perfect pro-Arab record.

One surprise (at least for this reporter) was the presence of retiring House member Joseph Kennedy (D-MA). The Kennedys have alwasy been good at rallying Jewish support but apparently not this one.

Chief House Zionist villains are Michael Forbes (R-NY) and Jerry Weller (R-IL) with 8 black marks each. While J.C. Watts (R-OK) who is the House's only black Republican, Jim Gibbons (R-NV) and former track and field athlete Jim Ryun (R-KA) had seven each.

Some Jews did pretty well in the pro-Arab ratings. Liberal Jewish stalwarts Barney Frank (D-MA) and Sam Gejdenson had two. While Ben Cardin (D-MA) and Sander Levin (D-MI) each had only one. Cardin escaped the pro-Arab heros list by participating in the Congressional delegation to Isrel's 50th anniversary celebration. Levin evaded a similar dubious honor by co-sponsoring the Congressional resolution on the reuinification of Jerusalem.

How did the leadership of both Houses do? Most were in the middle of the pack.

One bright spot for supporters of Israel was House Majority Whip Tom DeLay (R-TX) who scored five black marks. DeLay who is a favorite to succeed Gingrich at some point in the future was the only member of either party's top leadership to be dubbed a "bad guy" by the Washington

JWR contributor Jonathan S. Tobin is executive editor of the Connecticut Jewish Ledger. He was the recipient of the American Jewish Press Association highest award: First Place in The Louis Rapoport Award for Excellence in Commentary and Editorial Writing. The Rapoport award is named for the longtime editor of the Jerusalem Post and was given to Mr. Tobin at the AJPA's 1997 Simon Rockower Awards dinner at Cleveland on June 18, 1998.