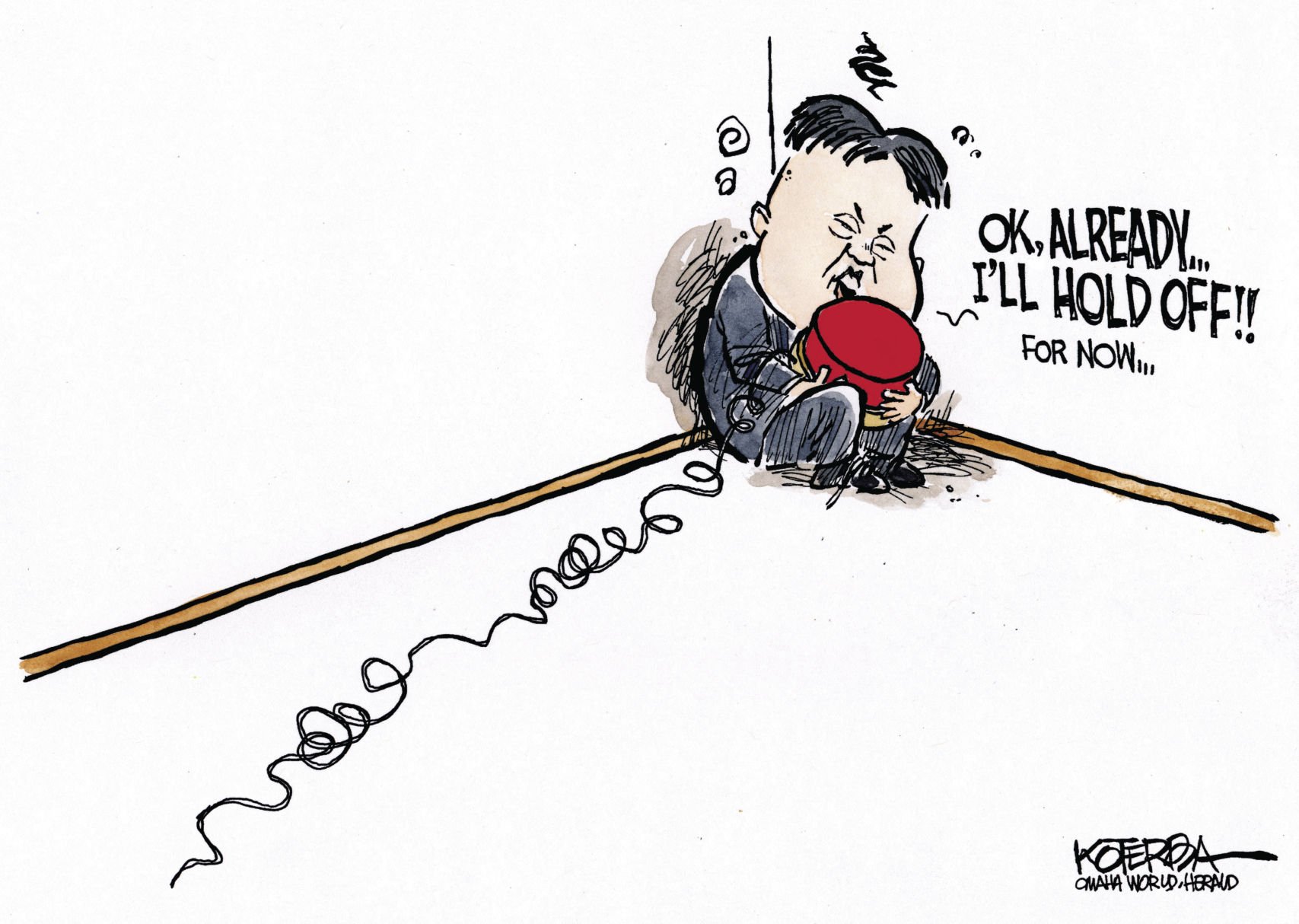 North Korean dictator appears to have blinked and can claim a foreign policy victory and justification for his strategy.

Reminiscent of President "peace through strength" approach to deterring adversaries, stood up to the blustering despot and forced him to back down from his threat to launch missiles at .

, biggest ally, no doubt played a role in getting Kim to change his mind, but primary credit should go to the president.

What a far cry from the policies of the last several administrations. They favored diplomacy over confrontation, allowing to proceed with its clandestine nuclear program in exchange for empty promises. Former President , former Governor and Secretary of State were among those who visited on various diplomatic missions.

Albright engaged in a champagne toast with Kim's father, , after claiming success in getting the country to curtail its missile program. We have seen the failure of that approach and are witnessing the success of its opposite.

Though Kim seems to have backed down from launching missiles at and touting his capability to strike targets on the mainland, He has retained his overheated rhetoric. In a case of the pot calling the kettle black, Kim warned the , as reported by The Wall Street Journal, "to take into full account" whether the current standoff was to its benefit. He added it was incumbent on the to "stop at once arrogant provocations against the DPRK () and unilateral demands and not provoke it any longer."

Kim added, "If the Yankees persist in their extremely dangerous reckless actions on the and in its vicinity, testing the self-restraint of the DPRK, the [North] will make an important decision as it already declared," meaning he might still order a strike against , or put some missiles offshore to test American resolve.

American resolve has been tested and has prevailed, at least for now. Kim has lost face. His military leaders and others will take notice, as will the rest of the world. The significance of the unanimous resolution imposing new sanctions on , which included the support of , could not have been lost on Kim.

New presidents almost always face a foreign policy test. Some pass, some fail. was judged weak by Soviet dictator , which many believe precipitated the Cuban missile crisis in 1962. believed press reports that was a "cowboy" and dangerous, so they released American hostages on the day of his inauguration in 1981.

There is a time for diplomacy and a time for displaying strength. sent a signal to the world by setting a timetable for withdrawal of troops from before victory over the could be achieved. He apologized to the world for what he saw as America's "arrogance." Our enemies took notice and viewed his statements as an invitation to adventurism.

and his defense secretary, "Mad Dog" Mattis, took another approach, returning Kim's rhetorical fire with rhetorical fire of their own. It worked, at least temporarily. Where to go from here remains an open question, but the goal remains the same. (and ) must never be allowed to develop nuclear weapons capable of reaching or threatening America's allies, including and .

deserves credit for standing up for the country and confronting one of the world's most unpredictable dictators. He probably won't get any credit from the media, most , or the foreign policy establishment, but our adversaries are bound to take notice and perhaps adjust their view of the president in ways that benefit America.