Ransom by another name 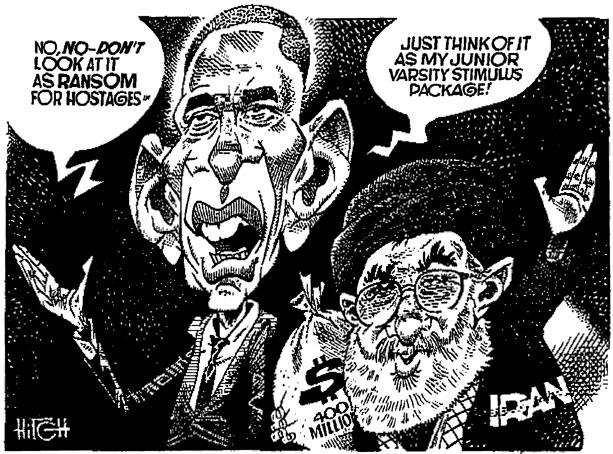 You've probably heard the very old riddle: When is a door not a door? When it's ajar.

An updated version might go like this: When is a ransom not a ransom? When the Obama administration says it isn't.

President Obama and his want us to believe that in foreign cash that was flown into under cover of darkness on an unmarked cargo plane was merely money "owed" to the world's No. 1 sponsor of terrorism from a failed arms deal negotiated with the Shah of more than 35 years ago.

The president's explanation is that the money was part of the nuclear deal reached with and the first installment of a settlement resolving claims at an international tribunal at . The president says settling the claim now is actually saving money, the full amount of which might have had to be paid if the case were fully litigated before the court.

We are to ignore a statement by one of the four Americans held hostage by the Iranian regime (one of them since 2011) before being released in January. Christian pastor told Fox Business Channel last week: "I just remember the night at the airport sitting for hours and hours there, and I asked police, 'Why are you not letting us go?'" Abedini said the policeman answered, "We are waiting for another plane so if that plane doesn't come, we never let [you] go.'"

What was the "other plane" carrying that was so important to the Iranian government that only its arrival would trigger the release of Abedini and the three other hostages, and its failure to land would keep them in captivity? Food? Toilet paper? Western movies? Or money?

It is a sad day when one must choose between believing the American president or the Iranian government that has vowed to wipe out and then come after America and subject the world to fundamentalist Islam. The administration refuses to say how many Americans have died directly or indirectly from support of terrorism.

The Washington Free Beacon reported last fall that the administration has stonewalled a request from to release figures on the number of Americans and Israelis killed by and its terror proxies since the 1979 Iranian revolution. Undoubtedly this was to ease opposition to the deal with not to proceed with the creation of nuclear weapons, which they most assuredly are creating in secret, or will create when the "restrictions" expire in a maximum of 15 years, depending on one's interpretation of the deal. is permitted to enrich uranium in the meantime.

Writing in last week, former Attorney General thought he knew the reason for the foreign cash and the secrecy behind the January transfer of funds: "There is principally one entity within the Iranian government that has need of untraceable funds. That entity is the Quds Force -- the branch of focusing particularly on furthering the regime's goals worldwide by supporting and conducting terrorism."

The Iranian regime clearly sees the as ransom for the illegally held Americans. A video showing pallets of foreign cash has surfaced on the Internet. The administration won't confirm that is the money it sent, but does it matter? The money was sent.

Consider the definition of "ransom" and whether this fits what occurred in January: "the redemption of a prisoner, slave, or kidnapped person ... for a price."