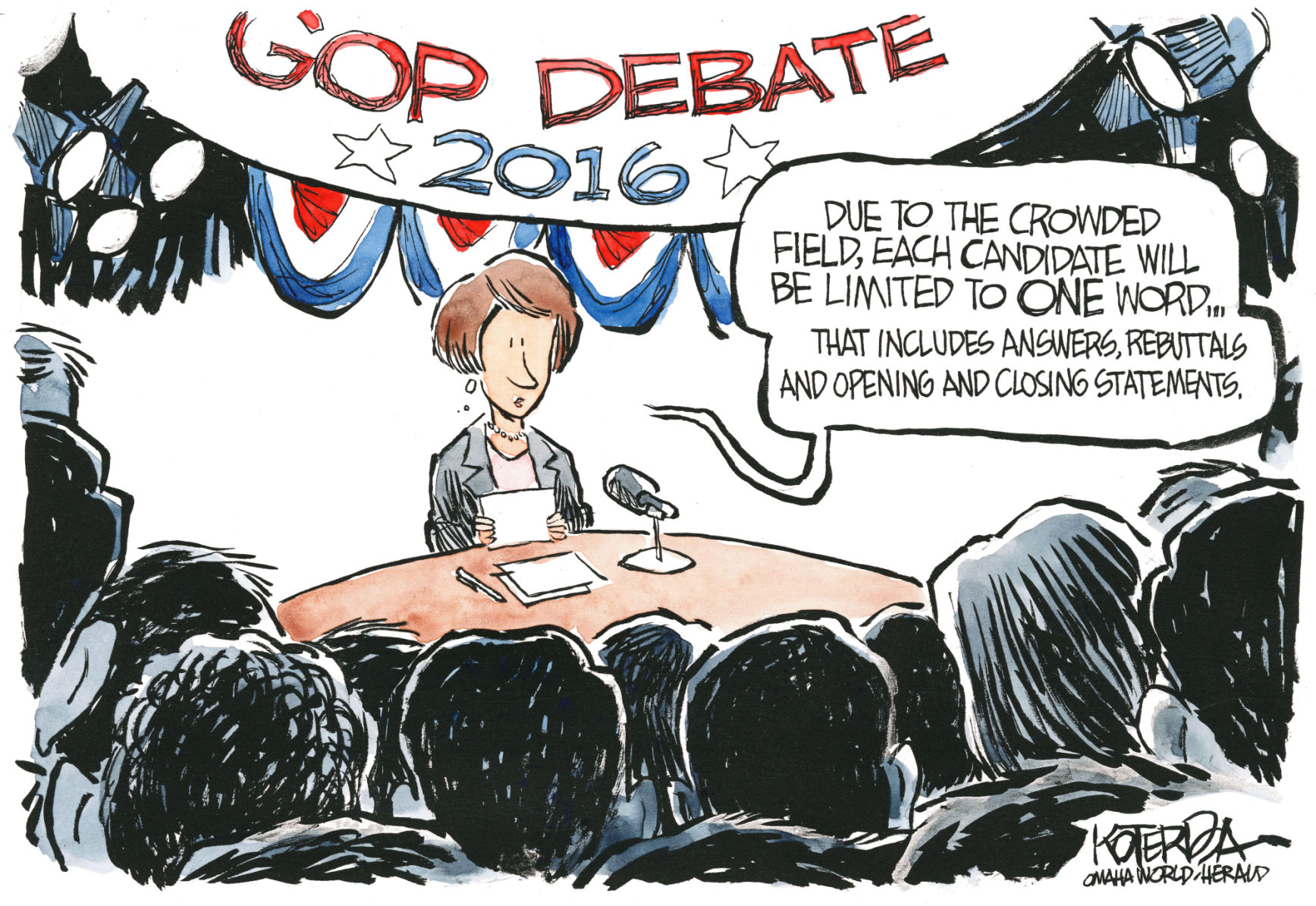 -- When it comes to debates the , which bills itself as the "world's most prestigious debating society," remains the gold standard. Begun in 1823, The Union, in modern times, has hosted debates that have included such luminaries as and the Dalai Lama. debates produce useful information. The same cannot be said for U.S. presidential debates.

Next week, 10 Republican presidential candidates will gather on a stage in , behind podiums like "Jeopardy" contestants. With so many candidates having so little time, little useful information will be dispensed. More likely the all-male cast will be looking for ways to squeeze in their rehearsed sound bites, which will be replayed in their campaign ads and, they hope, on major news programs. But not to leave anyone out, has just announced a prequel to the main debate for all the other candidates who failed to meet the requirements for the primetime event. So now , and Sen. will also get their chance to say little of substance.

In 1960, the first televised U.S. presidential debate pitted against . , after several failed attempts, aired its first leaders debate in 2010. In 1964, Labour Party Leader had challenged Prime Minister to debate, but Douglas-Home declined, saying, "You'll get a sort of 'Top of the Pops' contest. You'll then get the best actor as leader of the country and the actor will be prompted by a scriptwriter."

Leading up to this year's British election, all parties received TV exposure and debate time, but the best candidate showing may have occurred on when the three top candidates -- Prime Minister of the , leader and , who headed the Liberal Democrats, were grilled in a mesmerizing Q&A session.

In that session, broadcast on , the candidates didn't debate head-to-head, instead host asked questions of each of the candidates, who appeared sequentially for 20 minutes apiece. Then the studio audience asked questions. Many of their questions were better and more confrontational than Paxman's. Valuable information was conveyed and voter impressions confirmed. Cameron and his party won the election in a landslide.

While it's true, as Director wrote recently in , that the has streamlined the debates from 2008 and 2012 -- when there were 23 and 20, respectively -- there need to be more changes in the way we elect our presidents beyond these political fashion shows. This will help us avoid buyer's remorse, like the kind highlighted in a 2014 Economist/YouGov.com poll that found that only 79 percent of Obama voters would vote for him again, if given the chance.

A good first step to improving debates has been the addition of conservative questioners to debate panels. The primary criticism from conservatives about these contests has been that reporters they believe to be liberal ask questions that reflect their own worldview and are often designed to produce answers Democratic candidates can use to their advantage. Republicans should not expect softball questions from conservative questioners.

For the 2016 debates, /Telemundo and will sponsor one; will partner with , a Christian network, for another, and and the Independent Journal Review will partner for a third.

In addition, notes Spicer, "There will have been 25 candidate forums before the first debate. ... These forums, from (Conservative Political Action Committee), to Citizens United to the forum on SiriusXM on the Wednesday before the first debate, allow the candidates to address voters directly without the back-and-forth of a debate."

This is progress. One hopes the Democrats will follow the Republican example, or better still, the example of the . If you've never seen what a real debate looks like, go to oxford-union.org and find the link to YouTube for some of the most exciting political and social issue exchanges you will ever see.

Next week's debate is unlikely to come anywhere close.