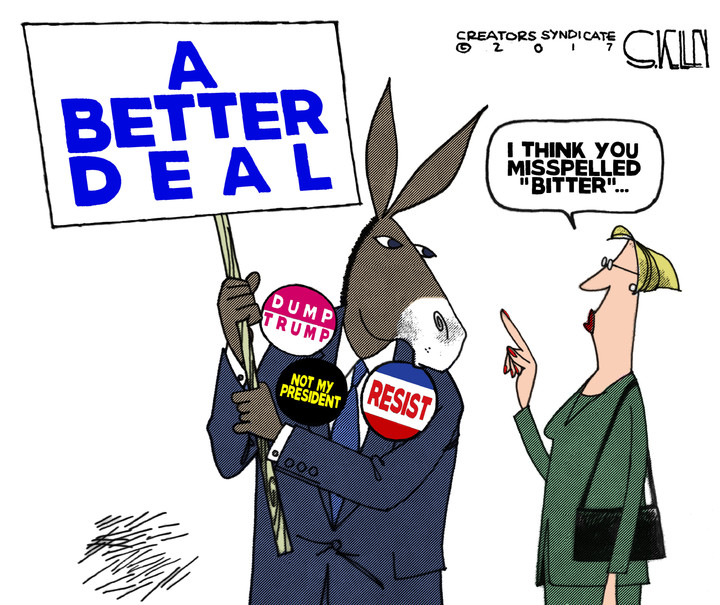 offered Americans a "Square Deal." His fifth cousin, , gave us "The ." Modern , who have lost election after election, are now offering the country "A Better Deal."

Speaking in , a small town that voted overwhelmingly for and is represented by a Republican in , Senate Minority Leader (D-NY) said, "Too many Americans don't know what we stand for."

Actually, they do know and that's why don't have the , why they lost their congressional majority and the reason they are in the minority in most state legislatures and governorships.

Standing on a platform with other aging, hard-left , including House Minority Leader (D-CA) and Sen. (D-MA), the "Better Deal" sounded like warmed over hash.

Here's how described it: "The policies combine left-leaning doctrine old and new -- a $15-an-hour minimum wage, a crusade against monopolies, and efforts to lower prescription drug costs -- elevating issues expect to animate next year's midterm elections and supplying an answer to critics who accuse them of offering nothing but obstruction."

It would be nice if one of those monopolies targeted by were the public schools and the increasingly popular school choice option, which recently noted is working to improve grades of especially poor and minority children.

Don't look for that to happen, as aren't about to give up campaign donations from the teachers unions.

Wasn't the expansion of the Medicare program under President to include prescription drug payments supposed to have reduced costs? Not so. When the government gets involved in almost anything -- from college tuition, to drugs -- costs go up, not down.

A study on the minimum wage law's impact on restaurant workers in found that while hikes accounted for higher wages, the number of hours low-wage earners were allowed to work declined, producing a net loss in earnings. In other words, the restaurant workers earned more before the government mandated a higher minimum wage. Doesn't anyone in government understand basic economics, not to mention human nature?

Nowhere in the unveiling of their "Better Deal" is there any suggestion by that low-income Americans can, or should, work for the day when they are independent of government. As the party of government, have addicted millions of people to the notion that they are owed, or "entitled," to other people's money. Theirs is a party of envy, greed and entitlement, pitting the successful -- and envy of them -- against the less successful with little expectation that those at the bottom of the wage scale can, or should, rise from their current circumstances to embrace a better life.

This latest effort to fool voters into believing have something new to say, or better policies to try, isn't a better deal, it's a raw deal.