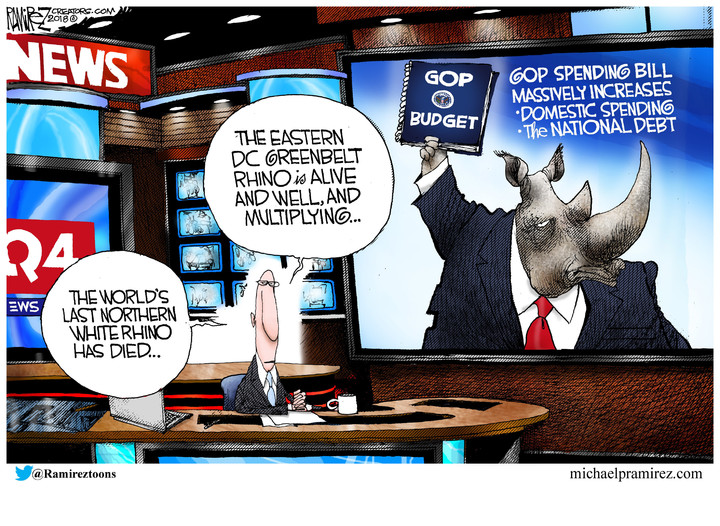 wants us to believe that the ridiculous 2,232-page spending bill passed by , but unread by most members, is a matter of "national security," because it has money to rebuild the military. He said he had to sign the bill for that reason, but promised never to sign one like it again. We'll see.

are rejoicing because they got everything they wanted, including a pittance for the border "wall," which specifies nothing like the prototypes the president recently inspected in .

Question: If a $21 trillion debt (and counting) and $1.3 trillion budget that requires even more borrowing isn't enough, what is? Voters expected at least some drainage of "the swamp" by now. Instead it appears more water is being added and the swamp is getting deeper.

In its analysis of the bill, The noted that total salaries for officers and employees of the increased by $12.6 million. Also included is money to prevent "elderly falls," promote breastfeeding and fight "alcohol use." Not to be left out of the spending frenzy, the House increased its budget to $1.2 billion, which is, reports the Beacon, $10.9 million above 2017 levels.

No one justifies any of this misspending on constitutional grounds because there is no justification for it. People are getting pay raises for adding to the debt. That's not promoting national security. Crushing debt -- whether in government or in one's personal life -- creates insecurity. History shows that enormous debt has been a contributing factor to the collapse of nations and empires.

Why is there more money in the bill for the when Secretary wants to cut her spending budget by 5 percent and focus on a $1 billion school choice program instead? How does this department "educate" students and why does it even exist?

In its analysis of the bill, the , a conservative think tank based in , got it right: "In addition to the defense increase, the omnibus provides an additional $63 billion in funding above the Budget Control Act caps for domestic spending. This increase is unwarranted. There are numerous wasteful, inefficient and misguided nondefense programs that could be cut or eliminated entirely. Furthermore, agencies will likely rush to spend all this additional money over the next six months, leading to even more waste. Instead of going through the regular order budget process, continues to fund the government by self-created crisis, failing to perform its oversight function and allowing wasteful and inappropriate spending to continue year after year."

This is not what voters expected from the 2016 election. There is always an excuse for additional spending. And it is almost always based on lies and the failure of too many members to put American citizens first and their own careers second. asked the to eliminate the filibuster, which would presumably remove the Republican justification for going along with threats by to "shutdown" the government. That is as likely to happen as ending wasteful and unnecessary spending.

In the musical "," the character sings "I'm just a girl who can't say 'no.'" That should be the theme of . So addicted have people become to government with nearly half the nation receiving a check of some sort and the other half paying for it, it has become a fiscal version of the Opioid crisis.

The stock market reacted to this and other bad monetary news by shedding 1,400 points off the Dow Jones Industrial Average last week. has been bragging about recent record highs in the market. It appears his bragging days are over for now. There is little in this bill to brag about other than shoring-up the military. All of the other misspending would be shameful, if Washington politicians knew how to feel shame.