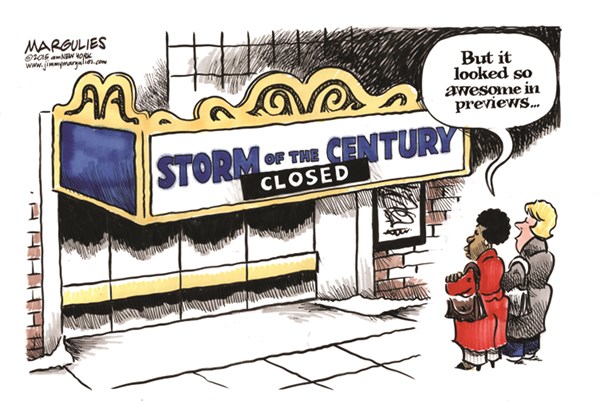 The network meteorologists barely had time to come up for air while "forecasting" the latest snowstorm non-disaster. Politicians, fearing what might happen to their approval numbers if a blizzard hit, went on TV to announce they were taking proactive measures. Mayor shut down tunnels, bridges, even the subway to prepare for the worst. Governors and announced road closings in and .

When wide-scale devastation failed to materialize, though was hardest hit, those same forecasters explained that snow is "unpredictable" and began backtracking faster than a four-wheel drive pickup on an icy road.

One year ago, on , we were treated to another of these "Snowmageddon" scenarios. At the time, USA Today quoted , a meteorologist at the , as saying: "It's a little surprising that people are falling for this."

I'm not surprised. People are gullible. Look at our politicians.

Here's some "breaking news": It's January and in many parts of America, it snows; sometimes a lot. When I was a kid I got my sled and, together with other kids celebrating the snow day, took to the hills. We threw snowballs and came home soaked and exhausted. Mother would hang my wet clothes on a radiator to dry.

Today, politicians and their ideological fellow travelers in the media use the normal cycles of the seasons to promote "climate change." That was the conclusion of of MSNBC, who said, "I just want to introduce the idea that this storm is connected to climate change." Gov. made the same assertion.

For those not buying into the cult of climate change, formerly known as "global warming," the website climatedepot.com is an excellent source for authoritative science and reporting that debunks the claims of climate alarmists.

Recently, we heard assertions from some "reliable" people that 2014 was the hottest year on record. News anchors and reporters dutifully, and without their usual skepticism, conveyed the news as fact. The reported that 2014 was the hottest year, citing NOAA and data, but was later forced to clarify its story, conceding that it "...did not include the caveat that other recent years had average temperatures that were almost as high -- and they all fall within a margin of error that lessens the certainty that any one of the years was the hottest." NOAA and also quietly had to concede that 2014 was probably not the warmest year, but I would venture to guess that very few people noticed the update.

Facts do not lessen the belief of cult members.

Consider some of the statements posted on climatedepot.com from scientists who question the honesty of those producing climate change "evidence."

Climatologist Dr. says the public is being misled: "I am embarrassed by the scientific community's behavior on the subject."

Former physicist Dr. : " knew about this fact. That didn't prevent them from pushing virtually all mainstream media to publish the lie -- in the very title -- that was declaring 2014 the warmest year."

Real Science accused Schmidt of "cheating" to "create the required talking point" of the "hottest year."

Climatologist Dr. accused Schmidt of "climate deception": "'Schmidt knows, after all his years with participating in the creation and naming of the RealClimate.org web site, that it is all about the headline.'"

As blogger has correctly observed, "is referee and commentator, along with his paid job as coach and cheerleader for one side."

The one-sided reporting and blind faith in climate change has infected politicians who are incapable of balancing the federal budget. So why put faith in them -- or the meteorologists who track with them -- that they can do anything other than talk about the weather?