Blame us for government shutdown 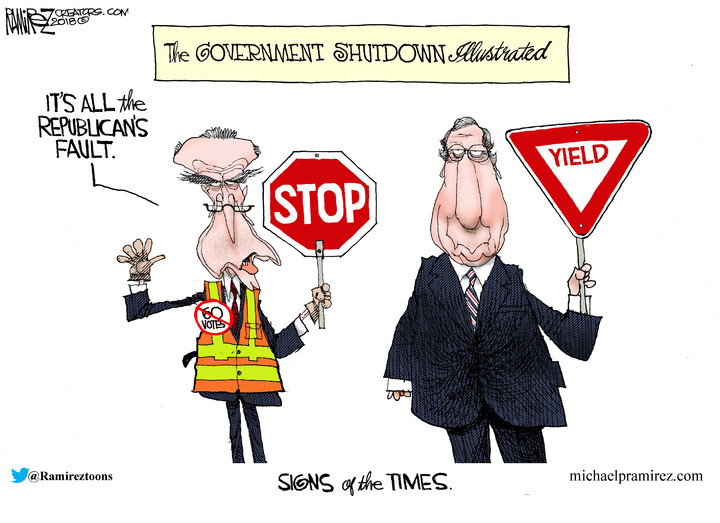 If we don't like what is happening in -- and few do -- the blame must be placed squarely where it belongs. It is "we the people" who send these people here.

We send people of different and often opposing viewpoints to and expect them to get along. Many quickly turn opportunities to represent us into opportunities to represent themselves. They become careerists, statists and hypocrites, first supporting one cause or policy when it suits them and then with whiplash intensity turning around and supporting its opposite when it is politically expedient.

It is why my favorite lecture circuit laugh line is "I'm happy to be here tonight from , where the only politicians with convictions are in prison."

Is that too cynical? Perhaps. There are a few good men and women in , but they are often overtaken by the swamp, which is more like quicksand, dragging everyone down. If re-election and fundraising become primary goals rather than promotion of the general welfare, everything else becomes secondary.

The greatest frustration for voters comes from knowing how a problem can be solved, but then witnessing politicians refusing to solve it because they prefer to retain the issue as a weapon in the next election, and the one after that.

Perhaps a cynic would say that the refusal by to pass a continuing resolution last week, much less a budget, is a device to turn attention from the great economic successes attributed by many to the Trump administration. But it is not cynical when one has observed how the "game" is played here. And to many it is a game, which serves only those who are playing it, not the rest of us.

The appeals to the "base" on the left and right rob the nation of a real debate on issues and an eventual resolution that benefits the majority. Is gaining and holding political power by a handful of politicians worth the sacrifice of faith in our government? And is this government, whether headed by or , what the Founders had in mind? Any high school history student, if taught the facts, must conclude it is not.

The Founders wanted limited government so that the people could be unlimited in pursuing their aspirations, consistent with their abilities and desire to take reasonable risks. What passes for government and governing today is a sham, a ruse, an embarrassment to their intentions and to ourselves, if we could be embarrassed about much these days. Even mocks our dysfunction.


Hypocrisy is practiced by both parties and is the exclusive property of neither one. are now quoting , who spoke out against a government shutdown when it was politically advantageous and who now are for it. have their own list of quotes about .

The only benefit from this, if one can call it a benefit, is that are at last fighting back. During previous threats to shut down government, have cowered and allowed and the media to blame them. It's nice to see them refusing unconditional surrender this time.

There must be a better way. There is, but the public must demand it. Given the divisions in the country, which are reflected in the , don't look for that to happen anytime soon.

This is why we need term limits. Meantime, here's one idea: shut down and don't pay them until they start behaving like adults and serve American citizens first.