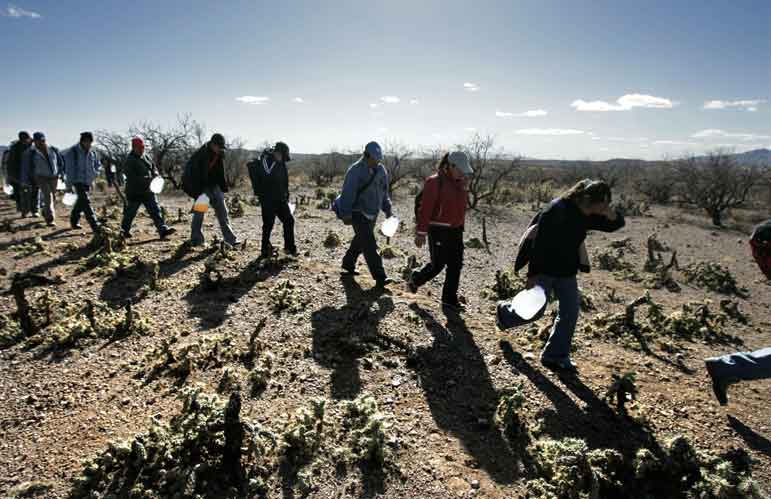 L.A. Times
After months of ignoring the problem and demonstrably false claims by his Homeland Security secretary that the southern border is "secure," President Biden is finally visiting the area this week as part of a trip to Mexico.

Last week, the administration announced it would immediately begin turning away Cubans, Haitians and Nicaraguans who illegally cross the U.S.-Mexico border. Why are laws against illegal border crossings being selectively applied to this group of migrants? Most people believe laws are supposed to apply to everyone. Try claiming an exemption for speeding if you are pulled over and watch the reaction of the police officer.

NBC News reports migrant crossings in fiscal 2022 alone hit 2.76 million, a record. More than 100 countries are represented among the migrants, including Chinese and Russians. No one knows the exact number of "gotaways," or how many have smuggled drugs into the country, or plan to commit a terrorist act.

Biden's attempt to show he is doing something about this reminds me of the idiom "closing the barn door after the horse has left." It's too little, too late.

Vice President Kamala Harris was initially assigned the task of fixing the problem, but all she did was visit a few Central American countries to find out the "root causes." The problem has gotten worse and her assignment has been almost universally judged as a failure.

There are "root causes" to the rise in criminal activity around the country, but just as the first response ought to be arresting and jailing criminals in order to protect the public, so, too, should the wall be finished for the same reason. Migrants can apply at established border crossings and have their asylum claims investigated to see if they are coming here for economic benefits or if they fit the legal definition of persecuted.

According to the website statista.com, the unauthorized immigrant population in the U.S. totaled 11.39 million as of last August. Fox News announced there have been over 600,000 total migrant encounters at the border since Oct. 1, a new record for the months of October, November, and December.

Biden's "plan" was criticized by the Center for Immigration Studies (CIS) as a "shadow immigration system" that includes "minor changes to tactics, but no change to long-term strategy." CIS has also called it "unconstitutional," which it is. Presidents cannot unilaterally repeal laws passed by Congress and signed by previous presidents of both parties.

Andrew Arthur, the Center's fellow in Law and Policy, elaborates: "The administration claims that this plan will allow aliens 'to enter the United States lawfully through' those ports of entry, but in reality 'entering' without a visa through a port of entry is as 'illegal' as crossing the border without a visa between the ports of entry, regardless of whether you have an appointment to do so."

Lying in Washington is an art and clearly Jean-Pierre has not been there long enough to even merit an undergraduate degree in misinformation.

The great frustration for many is that the solution is simple, but not applied – finish the wall, deport those here illegally and charge those who have committed crimes while here and either deport or incarcerate them.

Problem solved, but when politicians who have other agendas in mind are in charge, the problems are rarely solved and usually get worse. Even partially closing the "barn door" now won't help.