Flotsam in the
wake of romance

LOVE BLOOMS ON THE JOB, the item in a glossy magazine announced to the world, with pictures of the saucy, middle-aged couple inset into the story.

The only hint that this was no ordinary courtship between two interesting and powerful people came buried in the piece: 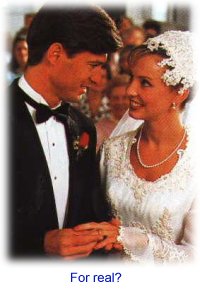 "Both will have to leave long-term marriages," the reporter noted, almost as an afterthought. The story made no further mention of the other lives left like so much flotsam in the wake of this romance, an abandoned wife and husband, a child who will spend his adolescence shuttling between two households.

I know the woman in the story. A neighbor and casual friend for 15 years, she is someone I like and respect. But as I read the piece, I found myself growing ever angrier, both at her and at a society that has become so indifferent to divorce that it can treat the breakup of a marriage that has lasted half a lifetime as something worth celebrating. Tolerance has become the only socially acceptable attitude toward divorce. No wonder we have so much of it.

If current trends hold, more than half of all the couples that walk down the aisles this June will divorce. Of those who do, 60 percent will be parents. Although divorce rates have stabilized in recent years, even slightly declining over the last decade, they remain at levels unprecedented in human history.

A handful of states have enacted new laws making it more difficult for couples with children to divorce, but the United States remains a leader in no-fault divorce. And there is neither the will nor the desire to change these facts. How can there be when even the pillars of our communities -- from political and business leaders to our pastors -- suffer no opprobrium for breaking their marriage vows?

Most of us now adopt the attitude that it is none of our business if a couple decides to divorce. These are personal decisions, we rationalize, that are best left to individuals to work out as they can. But, in fact, marriage is not a private arrangement between two people but a social institution that exists to benefit the community as well as the individuals involved. If marriage were nothing more than a commitment of love and fidelity of one person for another, the state would have no interest whatever in regulating it. But marriage is much more: It is a social contract that establishes a stable relationship in which to bear and raise children.

Certainly, there are times when divorce should be permitted, perhaps encouraged, even when there are young children involved -- if, for example, there is physical or sexual abuse of family members. But

divorce should never be celebrated -- it is, after all, a mark of monumental failure. A divorce signifies that one or both parties in the marriage have failed to abide by a moral, legal and social contract, hardly behavior worth applauding.

Until very recently, most Americans believed divorce deserved both shame and pity. Divorce could ruin a career, end political ambition, disgrace a family. We expressed sorrow, not congratulations, when we heard that friends or relatives were divorcing. Not anymore. Divorce has become the norm, a long marriage the aberration.

I don't presume to know what circumstances led to my neighbor's divorce. As Tolstoy once observed, "All happy families resemble one another, but each unhappy family is unhappy in its own way." I am tempted to offer my condolences to my friend. But how can I, when she flaunts her happy new coupledom in the pages of the local celebrity magazine, posing with the other man as any other love-struck bride-to-be?

We've gone from scorning divorce, to tolerating it, to ennobling it in barely one generation. The change in attitude has salved a lot of guilty consciences, but it has also destroyed millions more families in the process. Maybe it's time we reconsider whether our compassion has been