Sex, honor and the presidency

AT FIRST, THE TWO CASES seem to bear little resemblance. One features a suit against the National Honor Society. The other concerns the president.

The Honor Society excluded two Kentucky 17-year-olds because they had both become pregnant and delivered babies while in high school. The Honor Society is supposed to exalt not just scholars but leaders as well. 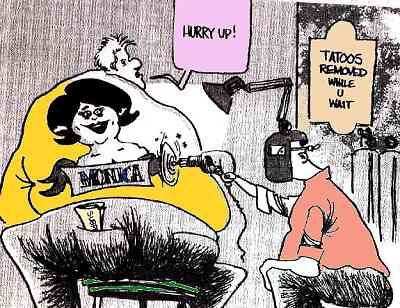 The American Civil Liberties Union has taken up the case of Somer Chipman and Chasity (no joke) Glass, as has The New York Times. And what is glaringly obvious is that there is no consensus in this nation about when and where sexual morality ought to obtain -- or even if it exists.

Not only do the Times editorial writers not think that getting pregnant in high school is shameful; they seem to think it is admirable. "Ms. Chipman's and Ms. Glass' achievements -- doing well in school in spite of their parental responsibilities -- prove that an unplanned pregnancy does not have to derail a student's academic career and aspirations. Any honor society chapter should be proud to count them as members."

The ACLU is concerned only with validating its own peculiar ideas about sexual equality. If boys are not excluded from the honor society for engaging in premarital sex, they reason, neither should girls.

But neither The New York Times nor the ACLU recognizes that traditional stigmas against unwed parenthood served moral purposes. However capably Glass and Chipman may be managing, the facts about most illegitimate children are incontestable. They are at much higher risk for a whole panoply of bad outcomes than are children born to married couples. They are far more likely to drop out of school, live in poverty, get into trouble with the law and commit suicide than are children in two-parent homes.

Even if the mother eventually marries, she will spend an average of seven years as a single mother, and her marriage will not dramatically improve the life prospects of her children. She will also be more likely to divorce than a woman who has never borne out-of-wedlock babies.

Is it fair that young men who engage in sex don't get punished and women do? Well, that depends upon your goal. If you want to discourage illegitimate births, it makes sense to let women bear the heavier burden of stigma. It also serves the interests of women. If women make themselves sexually available only to men with honorable intentions, they have happier and more satisfying lives. Of course, not every woman is wise enough to perceive this. That's why shame and honor were traditionally called in to do society's heavy lifting.

Which brings us to the president. The talk shows and opinion polls tell us that most Americans believe that the president has engaged in sexual relations with "that woman" and that he lied about it under oath. The same polls reveal that people do not think these offenses are impeachable.

When asked why, people stammer about private vs. public conduct, about not wanting to root around in the president's sex life (an interesting term -- as if genitalia have lives all their own), and about low inflation and high profits.

The obvious conclusion is that people simply do not regard sexual misbehavior as serious. "That's between him and Hillary" goes the typical shrug. And if the underlying offense is trivial, then the lie to conceal it is considered trifling as well.

I have noted before that if the president were found to have committed racism in private instead of tawdry adultery, the country would not regard the offense as minor. So the issue is not public/private but rather that most Americans just don't think there are any serious rules about sex anymore. Certainly the ACLU and The New York Times don't.

But look around you. The gravest threats to America's well-being arise from the widespread abandonment of sexual continence by millions of Americans. Sexual immorality has led to countless divorces shattering the peace of 45 percent of America's children, millions of illegitimate births, and even youth violence, as sons without fathers find negative ways to assert their masculinity.

Sexual morality is not an excuse for peeping Tomism. It is the foundation of a healthy society. It is the opposite of