AL CHECCHI IS ONE OF THE MULTIMILLIONAIRE DEMOCRATS running for governor of California. Asked by a reporter whether he would send his children to public school, he blurted out, "Of course not. Why would I do a thing like that?"

Yet when the subject of Proposition 227 arose -- the ballot initiative that would eliminate bilingual education and replace it with one year of English immersion -- Checchi was quick to smear it as "legislative vigilantism." 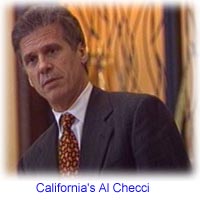 There you have the distilled liberal position on education: Under no circumstances should you subject your own children to the flawed system but by all means slander those who are working to change it. Steve Ybarra, a member of the California Democratic Party's Latino caucus, calls Prop. 227 "racist thuggery."

Now, all good Democratic voters are expected to heed this shameless name calling (which substitutes for argument) and conclude, "Gee, those Democrats are really looking out for my welfare. They like me. Republicans are bad. They hate blacks, Hispanics and women."

But something strange is happening in California this year. The voters are declining to follow the usual script. Two-thirds of California voters support Proposition 227, and only 20 percent oppose it. And according to a Los Angeles Times poll conducted between May 16 and May 20, 62 percent of Latino voters favor the initiative. If only Latinos voted on June 2, the initiative would pass by a landslide.

"I don't think it's anti-immigrant," a Latino corporate account manager told the Los Angeles Times. "In order to succeed in this country, you have to speak English."

The truth, that bilingual education actually harms those it was intended to help (sound reminiscent of welfare?), is sinking in. And despite the predictable resort to "the race card" and name calling by self-styled Latino leaders and Democratic officeholders, the people appear ready to give bilingual education the heave-ho.

One might imagine Republican officeholders citing studies by the University of Maryland and New Mexico State University showing that children enrolled in bilingual education enter the work force at a severe disadvantage and go on to earn significantly less than children taught exclusively in English. If you really used your imagination, you could envision Republicans making the case that in our polyglot era, when not two but dozens of different languages are spoken in California homes, bilingual education eventually becomes completely untenable. And finally, you might hope that Republicans would stress the importance of a common language in knitting all Americans, whether of Hispanic, Asian or other ancestry, together as one people.

If you imagined that Republicans were making any of those arguments, you would be disappointed. The proposition's sponsor, Ron Unz, did challenge Pete Wilson for the Republican nomination for governor, but he is pretty much alone in the Republican Party in supporting this initiative (Wilson is a late and unwelcome convert to 227). While the campaign of vilification waged against Prop. 227 hasn't swayed voters, it has blown the Republicans right down. They are hiding like mice.

Even Dan Lungren, the Republican candidate for governor (who is the closest thing to a white knight the Republican Party has at the moment -- watch this man), has objected to Prop. 227 on local-control grounds.

Proposition 187, the 1994 measure that denied state services to illegal immigrants, damaged the Republican Party's standing with Spanish-speaking voters. That is unfortunate. But Republican politicians have learned the wrong lessons. Instead of making the case that they are pro-success for Spanish-speaking immigrants, they seem to think they must kow-tow to the orthodoxy of the most extreme multicultural Democrats.

The public is leaving them