How ObamaCare Passed Thanks to 'Stupid' Americans 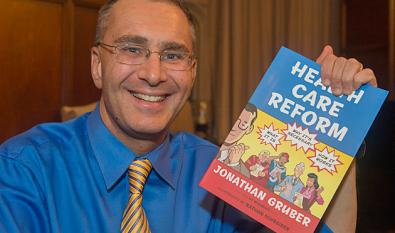 Jonathan Gruber is a man of great distinction. He teaches economics at MIT. He has a Ph.D. He was one of the key architects of the Affordable Care Act. He's also a liar (or something very close to it) and an arrogant liberal twit who intentionally misled Americans, whom he believes are stupid, in order to get the law through Congress. Without Jonathan Gruber's willful deceit, ObamaCare might have bitten the dust a long time ago.

On October 17, 2013, Gruber was on a panel at the University of Pennsylvania and explained how he helped write the Affordable Care Act so that it would pass Congress and become law. A video of that panel discussion has just surfaced. Here's what Gruber said:

"This bill was written in a tortured way to make sure CBO did not score the mandate as taxes. If CBO [Congressional Budget Office] scored the mandate as taxes, the bill dies. Okay, so it's written to do that. In terms of risk rated subsidies, if you had a law which said that healthy people are going to pay in — you made explicit healthy people pay in and sick people get money, it would not have passed… Lack of transparency is a huge political advantage. And basically, call it the stupidity of the American voter or whatever, but basically that was really, really critical for the thing to pass….Look, I wish … that we could make it all transparent, but I'd rather have this law than not."

Translation, as if we need a translation: I'm smarter than you. I know what's best for you. I took advantage of your inferior intellect — your "stupidity" — because "I'd rather have this law than not."

If liberal arrogance and conceit were crimes, Jonathan Gruber would be behind bars, preferably at Guantanamo Bay, where he could hang out with other true believers.

As Peter Suderman nicely puts it in Reason.com: "Gruber may believe that American voters are stupid, but he was the one who was dumb enough to say all this on camera."

After being hammered on the Web and on Fox, Gruber decided to go on MSNBC where he knew he could say anything and get away with it. "The comments in the video were made in an academic conference," he said. "I was speaking off the cuff, and I basically spoke inappropriately. And I regret having made those comments."

Translation #2: He made the comment in an academic conference and had no idea it would ever get out to all those stupid people he was talking about. He was speaking off the cuff and so he said what he really believed. He spoke inappropriately because — HE GOT CAUGHT! And he regrets making those comments because — HE GOT CAUGHT!

Now consider one more thing: Imagine if some conservative Republican had used the same dishonest tricks to get a law most Americans didn't want through Congress — without even one vote from Democrats. Imagine the banner headline in huge type on page one of the New York Times: Conservative Republican Calls Americans Stupid And Tricks Congress into Passing Historic, Unpopular Law.

Imagine it because that's the only way you're going to see it on page one of the New York Times, the place so many other liberal journalists go to find out what's worth reporting and what's not.