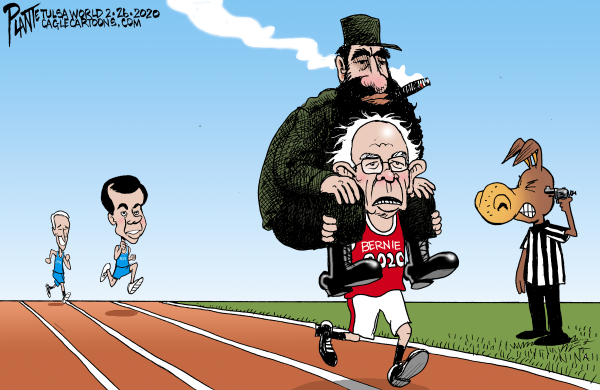 It's not easy to run a hideous dictatorship and still have fans and defenders in fashionable quarters, but the Castro dictatorship has managed it all of these decades.

The mass, spontaneous protests that broke out all over the country last weekend are yet another sign that the Cuban government lacks all legitimacy. In Cuba, it is the government versus the people, and lo, all these years, Castro's apologists have been with the government.

They have romanticized Fidel Castro, the founder father of Cuba's junta. They have swallowed its propaganda. They have made excuses for it. They have looked away from its crimes. And they have blamed America for its manifest failures.

If the protests continue in Cuba, there will be an existential struggle between people in the streets displaying American flags and chanting for freedom and an organized crime syndicate that rules by force and has long held the affection of American left.

During his presidential campaign last year, Bernie Sanders wouldn't back off his supportive statements about the Castro regime over the years — yes, the government should be less authoritarian, but it has done so much good. Filmmaker Michael Moore made a popular movie extolling the Cuban health-care system.

Upon Fidel's death in 2016, Canadian Prime Minister Justin Trudeau expressed his "deep sorrow" at the death of "Cuba's longest serving president" (when a president jails his opponents, he can indeed stay in office a long time).

Cuba's regime has long benefited from the romantic image of violent Latin American revolutionaries (Che Guevara is a popular progressive mascot), the fact that it is a left-wing, rather than right-wing dictatorship, and that it has always fed off Anti-American sentiments. The rationalizations offered for the regime are tinny and misleading.

We are supposed to believe that Cuba was sunk in medieval illiteracy until enlightened Communists came to power who cared above all about social progress and just happened to jail, torture, and kill lots of people in the course of teaching kids to read.

But it's not true that Cuba was markedly illiterate prior to the advent of the Castro dictatorship; in 1960, the literacy rate was about 80 percent, among the highest in Latin America. Nor is it correct that Castro had benevolent intentions with his literacy campaign; the point was to make it easier to stuff the Cuban people with Communist propaganda.

Finally, it's wrong to presume that people can only learn to read if they are cowed into submission by Marxist thugs; other Latin American countries achieved massive increases in literacy without throwing people in gulags.

The economic historian Brad DeLong has noted that Cuba in 1957 had lower infant mortality than many European countries, more doctors and nurses per capita than Britain or Finland, and as many vehicles per capita as Italy or Portugal. After decades of Castro's dictatorship, its per capita GDP ranks with Mongolia and Bhutan, according to CIA figures.

This suggests, correctly, that Castro took over a country in pretty good shape and wrecked it, rather than the other way around.

Cuba was among the leaders in the region in terms of infant mortality and life expectancy — two other supposed benefits of communism — before the revolution.


The government's failures are always blamed on the US embargo. If it weren't for the US strictures, on this view, Cuba would be the one Marxist economy in the world able to deliver plenty to its people. Actually, shortages are endemic because of the inefficiencies inherent to command-and-control economies.

The US embargo is unilateral, and the Cuban government has long been expert at evading it. There is nothing keeping Cuba from trading with other advanced Western countries and buying their goods, if the artificially impoverished country could afford them (its characteristic way of doing business is to buy on credit and then never pay up).

All of this has always been plain enough, but now even more so. There is a revolutionary movement afoot in Cuba, one that is courageous, inspiring, and — one hopes — truly democratic. It is the ordinary people of Cuba attempting to vindicate their rights against the Left's favorite dictatorship.