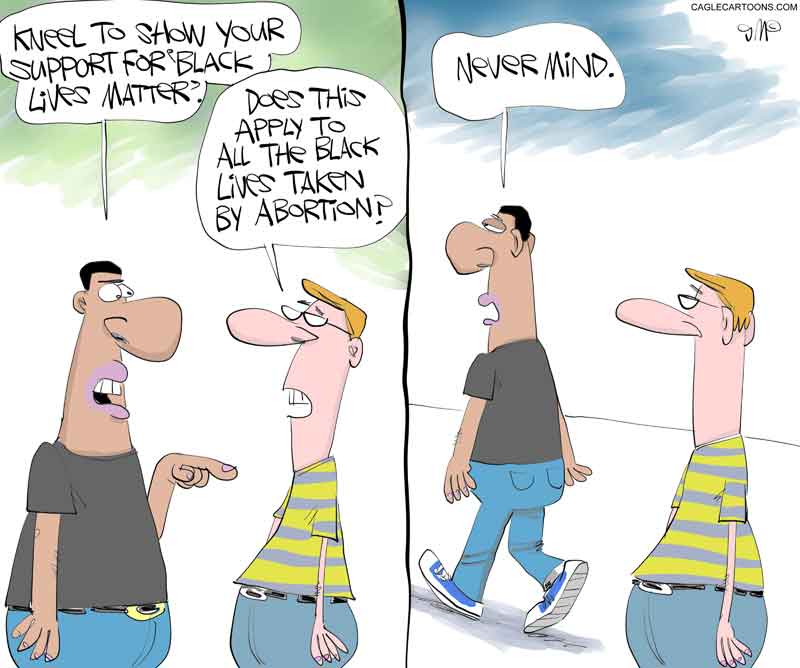 For years, pro-life activists — including and especially African Americans involved in the pro-life cause — have called attention to Planned Parenthood founder Margaret Sanger, and her deeply racist views.

Sanger was an unabashed eugenicist who believed that entire races and classes of people were inferior and thus "unfit" to reproduce; their expanding birthrate was, in Sanger's view, "the greatest present menace to civilization." This included immigrants, those with mental illness, the poor, the "Asiatic races" and Blacks, who she called "human weeds."

The left, which purports to care about the poor and to champion equality for Black Americans, has always ignored the explicit racism of Planned Parenthood's founder. But in today's fraught climate where statues and monuments of historic figures are vandalized and torn down, Sanger could no longer remain unscathed. This past week, Planned Parenthood of Greater New York announced it is renaming the Margaret Sanger Health Center in Manhattan and Margaret Sanger Square, where the building sits, as "a necessary and overdue step to reckon with our legacy and acknowledge Planned Parenthood's contributions to historical reproductive harm within communities of color."

One cheer for Planned Parenthood. That's like renaming Auschwitz but keeping the ovens.

It's hard to see how the abortion giant is going to remediate the shockingly disparate impact that its practices have had on the Black community in the United States. A majority of Planned Parenthood offices are located within walking distance of minority communities. Blacks represent roughly 13% of the U.S. population but have up to 40% of all abortions annually. Across the country, nearly 30% of all pregnancies in Black women are terminated. In 2011, more than 360,000 black babies were aborted; that number was greater than all the deaths of Black Americans that year from all other causes combined . In response, a Texas pro-life organization created billboards with the tagline "The most dangerous place for an African-American is in the womb." Lawsuits were filed that demanded the billboards be taken down — which they were. (The truth is an unwelcome guest in the abortion industry.) But the uproar did not die down, particularly after a 2013 report issued by the New York City government revealed that more Black babies were aborted than were born.

All told, more than 20 million black children have been aborted since the Supreme Court decided Roe v. Wade in 1973 — more than the entire number of people brought from Africa during 350 years of the Atlantic slave trade.

Why do these numbers not engender the same outrage as the deaths of George Floyd or Trayvon Martin? One answer is so unpleasant and painful that we rarely hear it explicitly stated: It's because those responsible want those lives extinguished. Indeed, that is the rallying cry of so many feminists who say, "Shout your abortion," "Abortion is health care" and "Free abortion on demand and without apology."

In other words, those lives don't matter because someone wants them gone.

A woman facing an unplanned pregnancy is clearly a very different actor than, say, a street criminal who shoots a rival gang member. But at the core of each act is a belief that says, "I have the power; therefore, I have the right."

Denying the humanity of the unborn child — something advancing science and technology has made much more difficult — is just one of the ugly pathologies abortion contributes to. A society that celebrates abortion sends the message to children that their existence depends upon the whim of another, and that their value is contingent, at best.

Abortion has also become a form of birth control, a stopgap in a culture that values pleasure over self-restraint and personal responsibility. The same attitudes that demand easy access for abortion to end the pregnancies that casual sex often produces are also behind the explosion of children born outside of marriage, the increased likelihood of criminality among fatherless boys, the poorer educational outcomes and the generational poverty, with all its attendant physical and societal ills.


This country's elite — our political, academic and entertainment/media classes — are, as it happens, overwhelmingly white and disproportionately left-wing. Within these groups are many loud voices promoting lifestyles of promiscuous sexuality, dispensing with marital fidelity and downplaying the need for the nuclear family.

Their wealth can insulate them — at least in part — from the consequences of their foolishness. That is not true of our poor, who have borne the brunt of our careless societal experimentation, and who cannot afford the au pairs, nannies, pricy preschools, nutritionists, tutors, therapists, counselors and expensive rehab facilities that the rich employ to buttress their lives and those of their children.

This self-indulgent irresponsibility among the truly privileged is, in and of itself, not only a form of racism but of callousness toward all human beings. To do whatever one wants, whatever the impact on others, is consummate selfishness.

We will never achieve a truly compassionate and egalitarian society unless we abandon the selfishness that got us here. Abortion is proof. In a society where unborn lives do not matter, no lives matter.