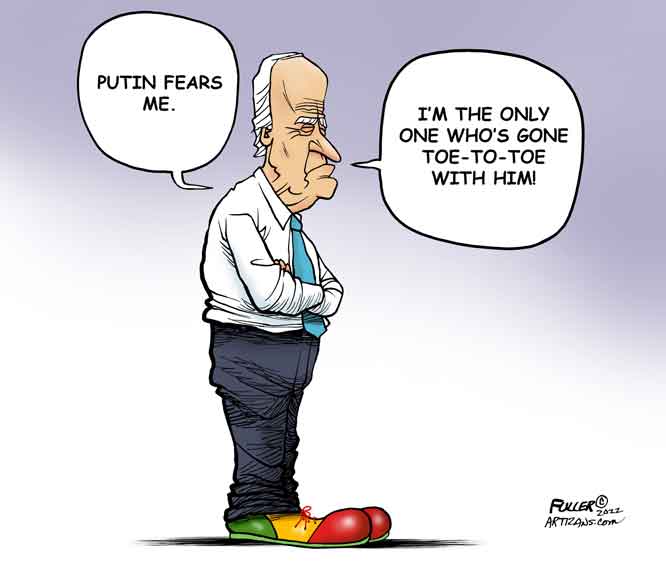 When President Biden says something isnâ€™t inevitable, it is time to count on it as a dead-lock guarantee.

The presidentâ€™s handling of events has been poor and the same with his policies. But nothing has been quite as bad as his snake-bit, maladroit, poorly informed, dishonest attempts to spin away the miserable results of his governance, especially on the economy.

If he says the border is not a crisis, there must be people crossing the Rio Grande en masse and getting admitted into the United States and bussed to locales around the country in shocking numbers.

If he says the Afghanistan withdrawal was an "extraordinary success," it must have been a shambolic embarrassment that left Americans behind, despite Bidenâ€™s assurance that that would never happen.

If he says the pandemic is effectively over, as he did last July, it must mean a new wave of the virus is about to send case counts soaring.

Even if none of these things had happened and Biden never said a word about them, he would have torched his credibility on the economy alone. He has produced a steady, ongoing farrago of false assurances and blame-shifting that has amounted to a master class in not convincing anyone of anything, except to tune out whatever he says.

According to Biden, things supposedly are never as bad as they seem, and by the way, even if they are, they are definitely not his fault.

The mantra from the president and his team now is that a recession is not inevitable, which, on its own terms, is not the most reassuring message. Something may not be inevitable and yet still be possible or even much more likely than not.

The rule-of-thumb definition of a recession is two quarters of negative GDP growth. In the first quarter, GDP contracted 1.4 percent, and a forecast from the Atlanta Federal Reserve pegs second-quarter growth at around 0, or on the knifeâ€™s edge of a second negative quarter in a row

. In other words, what Biden insists is "the fastest economy in the world" may be hardly growing at all.

If the U.S. does dip into a recession, we can be sure that Biden will be among the last to acknowledge it, just as he and his team pooh-poohed rising inflation as long as they could. It may be that "not inevitable" ends up being the new "transitory" — a wishful claim that says more about the people making it than real underlying conditions.

Biden is serving up large helpings of what he famously called "malarkey" in his 2012 vice-presidential debate.

He likes to maintain now that he cut the deficit by hundreds of billions of dollars when, in reality, the deficit had already been forecast to come down after the surge of pandemic spending, and his Covid-relief bill added substantially more deficit spending than there would have been otherwise.

He has called the idea that his Covid bill fueled inflation "bizarre" (while conceding that perhaps it had a "marginal, minor" impact). Yet former Treasury secretary Larry Summers — name-checked by Biden himself as an authority on the economy — famously predicted that the massive bill could stoke inflation.

Walking on a Delaware beach while on vacation this week, Biden upbraided a reporter for noting, truthfully, that economists are saying that a recession is now more likely than ever. The president joked that she sounded like a Republican, before lapsing into his rote line that a downturn isnâ€™t inevitable.

Biden has said that he believes that Americans can "handle the truth." Yes, they can, and the truth is that Bidenâ€™s poor policy choices have worsened economic conditions, as shortages disrupt the workings of the economy and inflation eats away at paychecks. Americans can acknowledge all this — indeed, feel it every day — while not liking it or being willing to tolerate it.