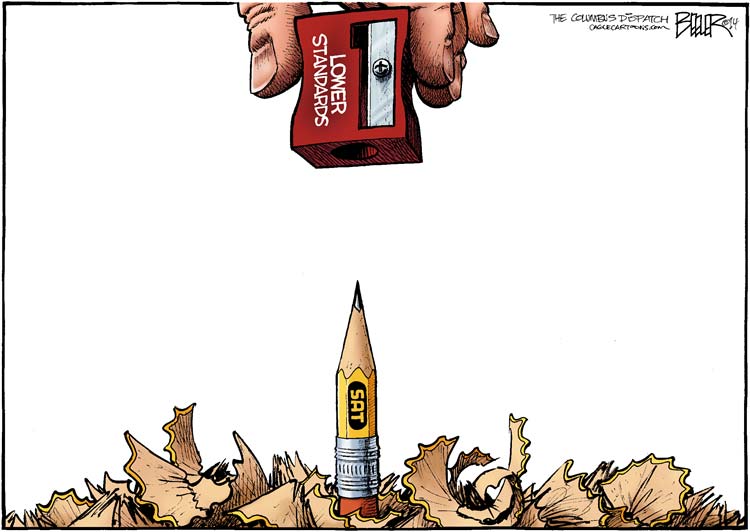 For decades, the College Board defended the SAT, which it writes and administers, against charges that the test gives an unfair advantage to middle-class white students. No longer. Under relentless pressure from the racial-preferences lobby, the Board has now caved to the anti-meritocratic ideology of "diversity." The Board will calculate for each SAT-taker an "adversity score" that purports to measure a student's socioeconomic position, according to the Wall Street Journal. Colleges can use this adversity index to boost the admissions ranking of allegedly disadvantaged students who otherwise would score too poorly to be considered for admission.

Advocates of this change claim that it is not about race. That is a fiction.

In fact, the SAT adversity score is simply the latest response on the part of mainstream institutions to the seeming intractability of the racial academic-achievement gap. If that gap did not exist, the entire discourse about "diversity" would evaporate overnight. The average white score on the SAT (1,123 out of a possible 1,600) is 177 points higher than the average black score (946), approximately a standard deviation of difference. This gap has persisted for decades. It is not explained by socioeconomic disparities. The Journal of Blacks in Higher Education reported in 1998 that white students from households with incomes of $10,000 or less score better on the SAT than black students from households with incomes of $80,000 to $100,000.

In 2015, students with family incomes of $20,000 or less (a category that includes all racial groups) scored higher on average on the math SAT than the average math score of black students from all income levels. The University of California has calculated that race predicts SAT scores better than class.

Those who rail against "white privilege" as a determinant of academic achievement have a nagging problem: Asians. Asian students outscore white students on the SAT by 100 points; they outscore blacks by 277 points. It is not Asian families' economic capital that vaults them to the top of the academic totem pole; it is their emphasis on scholarly effort and self-discipline. Every year in New York City, Asian elementary school students vastly outperform every other racial and ethnic group on the admissions test for the city's competitive public high schools, even though a disproportionate number of them come from poor immigrant families.

Colleges pay lip service to socioeconomic diversity, but that concept is inevitably a surrogate for race. Colleges have repeatedly rejected admissions schemes that purport to substitute socioeconomic preferences for racial preferences, on the ground that those socioeconomic schemes do not yield enough "underrepresented minorities." Harvard admits richer black students with a lower academic ranking over poorer but more qualified white and Asian applicants; it admits more than two times as many middle-class blacks as "disadvantaged" blacks and confers no admissions preference to disadvantaged blacks compared with their non-disadvantaged racial peers.

The SAT's critics notwithstanding, no alternative measure of student capacity exists that better predicts student success. "Leadership," "character," "persistence" — all these earlier attempts to come up with a more politically palatable proxy for racial preferences are far less valid as a measure of academic capacity than the SAT. The College Board's "adversity score" will be no different. And it will subject its alleged beneficiaries to the same problem as overt racial preferences — academic mismatch.

Students admitted to a selective college with significantly weaker academic credentials than the school norm will, on average, struggle to keep up in their classes. Many will switch out of demanding majors like the STEM fields; a significant portion will drop out of college entirely. Had those artificially preferred students enrolled in a college for which they were academically prepared, like their non-preferred peers, they would have a much higher chance of graduating in their chosen field of study. There is no shame or handicap in graduating from a non-elite college. The proponents of racial preferences, like all "woke" advocates, claim to be against privilege. Yet those anti-privilege warriors adopt a blatantly elitist view of college, holding, in essence, that attending a name-brand college is the only route to life success.

The College Board's adversity score will give students a boost for coming from a high-crime, high-poverty school and neighborhood, according to the Wall Street Journal. Being raised by a single parent will also be a plus factor. Such a scheme penalizes the bourgeois values that make for individual and community success.

The solution to the academic achievement gap lies in cultural change, not in yet another attack on a meritocratic standard. Black parents need to focus as relentlessly as Asian parents on their children's school attendance and performance. They need to monitor homework completion and grades. Academic achievement must no longer be stigmatized as "acting white." And a far greater percentage of black children must be raised by both their mother and their father, to ensure the socialization that prevents classrooms from turning into scenes of chaos and violence.

At present, thanks to racial preferences, many black high school students know that they don't need to put in as much scholarly effort as non-"students of color" to be admitted to highly competitive colleges. The adversity score will only reinforce that knowledge. That is not a reality conducive to life achievement. The only guaranteed beneficiaries of this new scheme are the campus diversity bureaucrats. They have been given another assurance of academically handicapped students who can be leveraged into grievance, more diversity sinecures, and lowered academic standards.