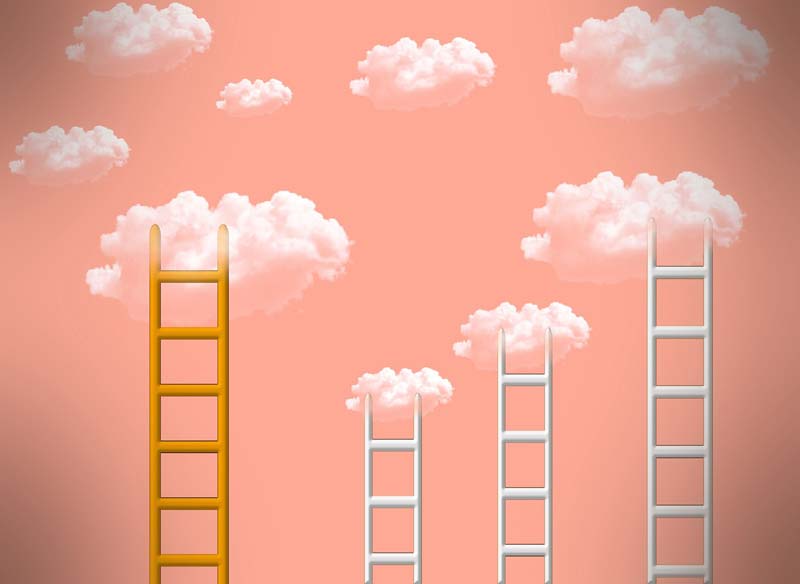 IN December 2018, the New York law firm Paul, Weiss announced its latest class of partners. A scandal erupted: all 12 of the newly promoted lawyers were white, the photo accompanying the announcement revealed. The New York Times published a front-page hit job on the firm headlined: 12 WHITE FACES REFLECT BLIND SPOT IN BIG LAW. Nearly 200 corporate general counsels signed an open letter threatening to pull their business from law firms whose partners are not "diverse in race, color, age, gender, gender orientation, sexual orientation, national origin, religion, and without regard to disabilities." Paul, Weiss did what every other mainstream institution does today when accused of racial bias: it fell on its sword. Rather than defend his organization against specious charges of discrimination, the firm's chairman declared his unwavering commitment to "diversity" and promised to do better the next time around.

The Paul, Weiss saga is a casebook study in the evasions and duplicities that govern the national discourse about race, when any discussion of the academic skills gap is taboo and when racial preferences have become the universal way to engineer "diversity."

THE reflexive charge of bias was particularly absurd leveled against Paul, Weiss. Even in the diversity-obsessed world of New York corporate law, the firm's efforts to recruit and promote black attorneys stand out. The diversity scorecards churned out annually by The American Lawyer and numerous other legal publications consistently rank Paul, Weiss's diversity profile in the top tier of American law firms. Its percentage of black partners with an ownership stake in the firm — 4 percent — is much higher than the New York corporate law firm average. Naturally, a Chief Inclusion Officer occupies the firm's top management ranks, overseeing the unconscious-bias and cultural-competence training that all Paul, Weiss attorneys must undergo. The firm offers a formal mentoring program exclusively to "diverse" lawyers and sponsors the usual race-based support groups.

The firm's chairman, Brad Karp, is the embodiment of the progressive corporate lawyer. His 2018 New York Times op-eds against President Trump's border policies and for gun control, his abortion-rights advocacy, and the firm's overwhelmingly left-wing pro bono practice won Karp the New York Law Journal's attorney of the year award last October. (Fortunately for Karp, that award was bestowed two months before the firm's partnership press release.) As part of its pro bono advocacy, Paul, Weiss sued the New York Police Department earlier this decade for the NYPD's enforcement of criminal-trespass laws in New York's public housing. It is safe to assume that no Paul, Weiss attorneys live in those violence-plagued projects.

Yet despite the firm's decades-long campaign for "diversity," its latest partner class did not measure up on that criterion. Diversity proponents know why: unconscious bias. The New York Times filled its January 28 front-page story on the firm with quotes from current and former attorneys alleging that blacks are held to a higher standard than whites: they have to be better to be promoted, and they are "punished . . . more severely for mistakes," in the Times's words. An attorney who worked at the firm from 2008 to 2011 complained: "I think associates of color are absolutely justified in feeling like they have less margin for error." (That attorney is now with the American Civil Liberties Union.) Minority attorneys' work "shines," according to the Times's sources, yet they fail to break into the good graces of the firm's top lawyers.

Who does break into those good graces? White males. An unnamed black female attorney complained: "There are white males at the firm that are visibly being given more time in business development opportunities and client contact. . . . They're clearly being cultivated." One of the firm's high-profile black partners, white-collar criminal-defense lawyer Theodore Wells, seconded the narrative about preferential treatment for white males. "The question is, what happens to the young black lawyer who's not a unicorn but a superb lawyer? Does he get through the same way the superb white lawyer does?"

The answer, according to the Times and its interviewees, is no. That is "B.S.," according to a retired attorney intimately familiar with elite New York firms. It is equally "nonsense" that black attorneys get punished more severely for their mistakes. The reality is the opposite: corporate firms give blacks many second chances. So why are there not more black partners? The same reasons that there are not more black computer engineers or physicians: the academic skills gap and counterproductive racial preferences. Blacks are hired as summer law interns and first-year associates at rates well above their representation among law school graduates, according to research by UCLA law professor Richard Sander. But because blacks' law school GPAs on average cluster at the bottom of their class (thanks as well to law school admissions preferences), they enter large firms (defined as having 100 or more lawyers) with academic qualifications a standard deviation below those of incoming white lawyers. Over a fifth of all new white lawyers at large firms have law school GPAs of 3.75 or higher, compared with 2 percent of new black lawyers. By contrast, 2 percent of new white lawyers in big firms have GPAs under 3.0, compared with 14 percent of black lawyers.

Despite the numerous support programs that corporate firms offer for "diverse" attorneys, this academic skills gap is infrequently overcome. Black lawyers at big firms report fewer assignments and less responsibility for major cases. Sander calls this under-assigning "benign neglect." While most of the attorney quotes in the New York Times story represent a serious misreading of the work environment, the statement about white males getting better opportunities and client contacts is undoubtedly true. The reason for that disparity is not invidious discrimination but partners' contact with the result of racial preferences.

The retired big-firm partner describes the dynamics created by preferential hiring. "There's a lot of resistance to working with black attorneys on big cases. No one says: â€˜I don't want this black associate.' Instead, it is: â€˜Jerry can work with him.' " These reluctant supervisors are not racist; they simply know from experience that a significant portion of the black associates are less competitively qualified. (Meantime, those black attorneys who are competitively qualified operate under the stigma of a quota system.) The skills gap shows up most in legal drafting, whether litigation briefs or financial instruments. Preference beneficiaries' writing is less clearly reasoned, with more analytical gaps, according to the retired partner — who happened to be one of two attorneys in his firm who affirmatively tried to help diversity hires with their writing. A poorly drafted bond indenture can cost the issuer a few hundred million dollars if there is a dispute over the indenture's financial covenants. Partners are therefore acutely concerned about the quality of work that their clients get.

The liberal partners, the strongest advocates for "diversity," rarely practice what they preach, instead funneling the results of diversity hiring whenever possible to someone else's case. In private conversations, they acknowledge the diversity sham but shrug their shoulders: "What choice do we have?"

Aware that they are not on the partnership track, black lawyers leave their big-firm employers at two to three times the rate of their white peers. By the time partner decisions roll around, few blacks remain in the pipeline to promote.

A tax partner from another New York firm observed the same winnowing down along the partnership track. "Most large firms, including mine, are eager to diversify, and that is often reflected in hiring decisions at the entry level," he told me. "But when they get to promoting people to partner, the merit system takes over. If people are hired for reasons other than their ability, they are not going to be able to compete in the race for partnership."

IF Paul, Weiss' chairman had explained that preferences deplete the partnership pipeline, he would no longer be chairman. His decision to allow the racism charge to stand unrebutted demonstrates a remarkable feature of our time: the leaders of mainstream institutions would rather cop to false charges of bias than speak the truth about the academic skills gap. They are not only silent about that gap; they also put their employees through a frenzy of implicit-bias training to overcome the phantom bias that allegedly holds blacks back. This taboo on the truth has another consequence: when leaders refuse to explain the real reason for the lack of diversity, they buttress the poisonous idea that American institutions remain indelibly racist, and the cycle begins anew — more preferences, more unhappy results.

The corporate manifesto drafted after the Paul, Weiss announcement is the latest in a series of threats launched over the last decade to pull legal business from firms without diverse partners. It remains to be seen who will accept the biggest hit to their bottom line: corporations that demand to be sent a legal team padded for diversity or law firms that cave to the pressure for greater racial proportionality among partners. In his diversity mea culpa, chairman Karp insisted: "There is no more important issue to me (and the firm's leadership) than diversity." Really? More important than legal acumen and providing the best advice to clients? More important than profits?

In fact, Paul, Weiss's annual profits per partner tally a cool $4.56 million. It's hard to shed a tear for corporate law firms or corporations themselves if they further sacrifice their competitive edge to the diversity ideology. In the short term, one thing is certain: if any elite firm dares to promote an all-white partner class in the future, we'll see no photos of that sorry crew.