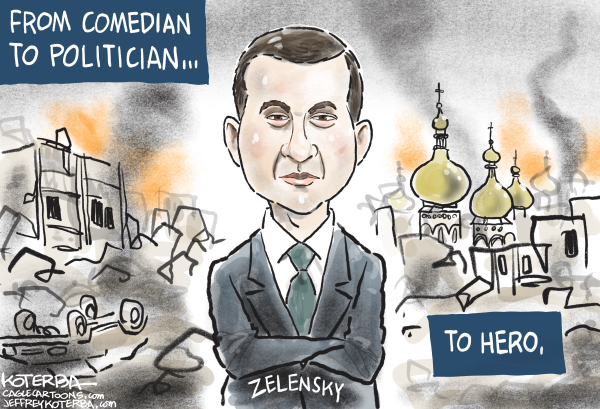 If anyone had any doubt that Ukraine has its own national identity, the early days of the Russian invasion should have eliminated it.

There's been the stiff resistance of Ukraine's fighters, the former president giving interviews in the streets of Kiev in battle gear, the ordinary men and women insulting and defying Russian soldiers, and above all, the comedian-turned-president, the now legendary Volodymyr Zelenskyy, refusing to leave his capital as Russian forces bear down on the city seeking to capture or kill him.

This is all so compelling because there is something inherently stirring about a people defending their homeland from a would-be imperial overlord.

The fight to save Ukraine represents a righteous nationalism. The Ukrainians aren't defending democracy per se or freedom in the sense of abstract rights -- although Vladimir Putin's Russia is a threat to both -- but their land and birthright. They are struggling for national self-determination, and even national survival.

Even in a globalized world, even when patriotism is not nearly as strong a force as it once was, even among Eurocrats who want to subsume Europe's nations in an EU superstate, Ukraine's struggle still strikes a profound chord.

In his speech prior to the war, making a direct appeal to the Russian people, President Zelenskyy spoke of his memories of Ukraine. "No one in Russia knows the meaning of these places, these streets, these names, these events," he said. "These are all alien to you, unfamiliar. This is our land, and this is our history."

"We are not part of one whole," he explained. "You cannot swallow us up. We are different. But this difference is not a reason for enmity. We want to determine our own course and build our own history -- peacefully, calmly, and honestly."

Zelenskyy was speaking a nationalist's language of love for his people's history, land and traditions. As G. K. Chesterton once wrote, "Cosmopolitanism gives us one country, and it is good; nationalism gives us a hundred countries, and every one of them is the best."

Of course, Ukraine's status as a nation is contested by Vladimir Putin, who claims that it rightfully belongs to Russia. His revanchist vision is often described an aggressive nationalism, but it is really a drive for empire. In his own lurid speech before starting the war, Putin laid out a spurious version of history wherein Ukrainian nationhood was an invention of the Soviet Union.

He attacked "the virus of nationalist ambitions," and claimed after the invasion began that Russian troops were only fighting against "nationalist groups" in Ukraine.

Putin is armed with newer weapons, but he's acting every bit the traditional Russian imperialist. Already in the 15th century, a crude Russian state ruled an enormous swath of territory. By the end of the 19th century, it had become one of the largest empires ever in terms of sheer landmass.

This empire was lost with Russia's defeat in World I, reconstituted by the Soviets, and lost again at the end of the Cold War. Putin seeks to revive a version of this project and notably referred in his pre-war speech to "the collapse of the historical Russia known as the USSR."

Zelenskyy and the Ukrainians are fighting for independence against this behemoth and, in so doing, giving Ukraine new national heroes and national lore that will sustain it even if the worst comes.

The philosopher Jean-Jacques Rousseau once wrote of Poland, another country constantly under threat from imperial Russia: "The virtue of her citizens, their patriotic zeal, the particular form that national institutions can give to their spirit, that is the only rampart always ready to defend it, and which no army could breach. If you arrange things such that a Pole could never become a Russian, then I can assure you that Russia will never subjugate Poland."

The Russian tanks may roll into Kiev, but Russia won't ultimately triumph over Ukrainian nationalism.