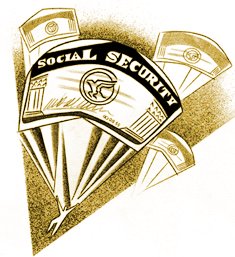 I have good news for younger generations worried that they won't be able to claim their Social Security benefits because we older generations have ripped them off and will be leaving nothing behind: Your fears are unfounded.

Don't just take my word for it. Consider the work of my colleague Charles Blahous at the Mercatus Center at George Mason University, who is a relative pessimist (some would say an alarmist) on this issue. His reputation commends his work as a good benchmark for where Social Security really stands.

According to his estimates, if no further steps are taken to shore up the finances of Social Security, the system will stop being able to meet its scheduled payment obligations sometime in the 2030s. (Note that benefit hikes are part of the schedule.) That would be bad, but even under this scenario the system is still paying out a roughly constant level of inflation-adjusted benefits over time, at least as those benefits are defined as a percentage of workers' taxable earnings (about 13%).

Of course, to the extent those taxable earnings rise, the benefits will be rising too, even if not at a spectacular pace.

Keep in mind that this is the worst-case scenario offered by a relative pessimist.

Another way to describe the problem is that, over the next 75 years, about 17% of scheduled benefits are currently unfinanced. Blahous estimates that the U.S. could cover that gap if the Social Security payroll tax were raised from 12.4% to 15.1%.

Now, you might have strong views about the wisdom of that kind of tax increase, but you should acknowledge that this is a very different reality than a bankrupt system. With Social Security on full cruise control, and with no forward-looking reforms, today's younger earners still are slated to receive more than their parents did - just not very much more.

Dean Baker, an economist to the left of Blahous, also has studied Social Security. He estimates that retirees 30 to 40 years from now will receive monthly checks that are about 10% higher in real terms than today's benefits. And keep in mind those are estimates per year. To the extent life expectancy rises, total benefits received will be higher yet.

To be clear: It may well be a bad thing when the Social Security trust fund is depleted, and Social Security is financed fully from current government revenues. That could destroy the perception of Social Security as a system where contributions are related to final payments.

But the real damage there is that the U.S. Treasury would be raided for ever-larger benefit increases for the elderly, unconnected to people's earlier taxable wages and contributions. This would be a bad outcome, but it is pretty much the opposite of the fear that benefits will disappear.

Second, the U.S. population will be much older by 2035, and so more services and innovations will be geared toward older Americans. As current millennials and Gen Xers become senior citizens, they too will benefit. They will be the first generations ever to step into a world "built for the elderly."

Third, imagine a future where these older millennials are the largest bloc of active voters. If they face a significant fiscal shortfall, they will have the option of letting in more high-skilled immigrants to work, pay taxes and help cover the deficit.

Boomer voters won't be around to stop this change in policy.


Finally, the variability of inflation across sectors probably favors the elderly over the young. There will be plenty of affordable real estate in the Sun Belt, and many of the elderly won't need to live near jobs.

The internet will be better than ever, and Skype calls to the grandkids and old friends are likely to be higher in quality. Drone delivery and self-driving vehicles might make life much easier for the relatively immobile, and biomedical technology is showing real promise.

I'm not saying everything will be fine in the future. The U.S. is vastly underperforming relative to its potential. But the claim that post-boomer generations will be left holding the bag, through a bankrupt Social Security system, just doesn't add up.