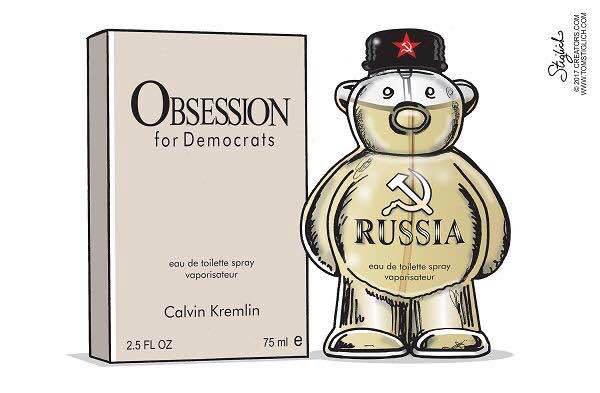 In the year-and-a-half since Donald Trump's election, the president has had to do little more than sit back and let the media make fools of themselves as they try desperately to catch him at something, anything. When they come up short, they fabricate stories, as we know, which fall apart and end with egg on the journalist's face, sometimes resulting in a firing.

Yet it's as if it didn't happen. The next day, the whole thing starts over, with everyone just sure that Trump is the fool, and still trying to prove it so. Fanaticism, yes, but it's also the domain of egomania—the very quality that the egomedia project onto their target when he dishes back at them and tells them about themselves. It doesn't matter how many times they've been "owned" by the president; they are never chastened, and the target remains the target.

Bear with me now. There is a similar dynamic between Washington and Moscow. How many times have we been shown the fool by Russia, effortlessly? To name just a few: the hacking that turned out to be spam; those "damning" facebook ads that appeared after the election; the Vermont electricity grid "sabotaged by Russia"; the bots that 'stole' Hillary's election; plus the even more farcical European versions of these follies (the Dutch foreign minister was "hiding" in Putin's dacha when he "overheard" the leader say he wanted to take over Belarus, Ukraine, Kazakhstan and the Baltics to form a "Greater Russia"). Never mind the implications of a suicide last week by a Ukrainian military pilot still bothered by a covert mission he was sent on at the time of the MH17 downing in 2014, which we reflexively blamed on Moscow. (And we like to think < I>Russia suffers from anti-Western paranoia.)

This is without mentioning the Chechen brothers whom Russia warned us about but whom our "intelligence" let bomb Boston anyway, or Russia's warnings that wrenching Kosovo from Serbia to gift Albanians a second state would be a precedent for global reordering. Palestinians calling for a Kosovo-style solution aside (never mind Catalonia), in 2008 Russia whooped our client Georgia when President Saakashvili tried to pull a reverse-Kosovo on South Ossetia, now giving that breakaway region a better case; and we're still trying to spin separatist Crimea as something Russia started, when it was we and ours overthrowing the Yanukovych regime in favor of one hostile to Russia. Sure enough, a key anti-Putin jargon is that he is "reordering the globe." And still, in between the bluster, the sanctions, and the outright bigotry, we find ourselves coming to Russia for help, whether with North Korea, Iran, or others.

In-progress U.S. foreign policy does not change course. It does not look back, it does not apologize. It only doubles down. So instead of pausing, taking the point, and reexamining, Washington becomes only more enraged and more menacing—and more determined to get Russia. Russia coming out on top becomes proof of Russian badness and the need to knock it down a few notches.

With each passing day, more and more Americans—who had never lost a wink of sleep over Russia—become convinced that, yeah, "Russia is a problem." People who a few years ago couldn't imagine adding another war to our long and discredited list now find themselves willing to add the most counterintuitive, counterproductive, and devastating of all. Even "Russia did it" becoming a punch line isn't enough to veer us off our warpath. Ironically, fool-exposer Russia will be targeted by its human equivalent in this context, fool exposer Donald Trump—who ran on avoiding precisely this outcome. Double-ironically, it's to please or compromise with the political, military, media, and intelligence elites who target him. He is being goaded from all sides into a confrontation with Russia, and this president more than any other must choose his battles. Fighting for US-Russia relations won't be one of them; he'll manage only to rage against the machine, amid the bombs of a foregone policy, that "It would be good if the U.S. and Russia got along."

Most Americans tuned in only when cued in 2014: suddenly the story was Russia. But for those of us who watched the molding of this war for 25 years, starting with our practice-run on Yugoslavia, it has been a predictable but fascinating study. One observes almost in slow-motion what one has been bracing for, as all fall into their predetermined roles to make this happen—from the simplest person to the intelligentsia—even pointing the "patriotic" enemy-of-the-state finger at dissenters (something I thought I left in the Soviet Union). It's all the more intriguing, given how much works against the warmakers: not only the truth of the situation—with recent chronology pointing to which side, east or west, made hostile moves first and consistently --- but also the promised information superhighway that's supposed to help us detect when confusion is being sowed. Add the aforementioned war debacles of choice, and this not-so-cold war we've brought to Russia's doorstep shouldn't be possible.

To still be willing to be told what's what by our discredited political and military brass amounts to crying wolf long after the real wolf has come and has been eating our people before our eyes.

I'm glad I don't have children. But you do. The Russians tried avoiding war and tried reasoning with us as long as they could, calling us "partner" to the last --- long after we started calling them "adversary", "hostile", "anti-American", and "Public Enemy No. 1."

Julia Gorin, a former refusenik, is a widely published opinion writer and essayist whose book "Hillarisms: The Unmaking of the First Female President" is the only original humor volume on the 2016 Democratic presidential candidate.