'I see parchment burning, but the letters are soaring free' 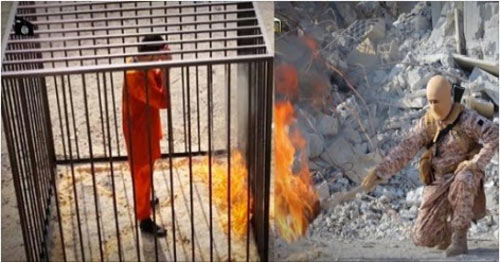 Book burning is as old as books, and as current as this week’s news.

The Associated Press reported on Monday that Islamic State fanatics have ravaged the Central Library of Mosul, the largest repository of learning in that ancient city. Militants smashed the library’s locks and overran its collections, removing thousands of volumes on philosophy, science, and law, along with books of poetry and children’s stories. Only Islamic texts were left behind.

“These books promote infidelity and call for disobeying Allah,” one of the ISIS jihadists announced as the library’s holdings were emptied into sacks and loaded onto pickup trucks. “So they will be burned.”

There was more book-burning soon afterward, when Islamic State vandals sacked the library at the University of Mosul. “They made a bonfire out of hundreds of books on science and culture, destroying them in front of students,” AP reported. Lost in the libricide were newspapers, maps, and texts dating back to the Ottoman Empire. UNESCO, the United Nations’ educational and cultural agency, decried the libraries’ torching as “one of the most devastating acts of destruction of library collections in human history.”

Perhaps the most chilling words ever written about book-burning were penned in 1821 by the great German poet Heinrich Heine: Dort wo man Bücher verbrennt, verbrennt man am Ende auch Menschen — “Where they burn books, they will in the end also burn people.” Today that axiom is etched on a plaque in Berlin’s Bebelplatz, the public square where more than 20,000 books deemed “un-German” and “decadent” were destroyed in a vast Nazi bonfire on the night of May 10, 1933.

Though Heine’s words are indelibly associated now with the Holocaust, they have lost none of their grim prescience. Just one day after news emerged of the book-burnings in the Islamic State’s so-called “caliphate,” the jihadists released a ghastly video exulting in the murder of Jordanian pilot Moaz al-Kasasbeh, who was burned alive in a metal cage.

There is something uniquely diabolical about setting books on fire, a lust to obliterate that almost ineluctably leads to even more dreadful evils. It is no coincidence that those obsessed with annihilating the physical expression of dangerous thoughts or teachings so often move on to annihilating the people who think or teach them.

“A book is a loaded gun in the house next door. Burn it,” orders Captain Beatty, the book-hating fire chief in “Fahrenheit 451” Ray Bradbury’s dystopian classic. “Take the shot from the weapon. Breach man’s mind. Who knows who might be the target of the well-read man?”

Yet if the long and heartbreaking history of book-burning teaches anything, it is that books cannot be killed by fire. Pages can be burned, libraries can be reduced to ash, treatises can be found guilty of heresy or sedition and set ablaze. But ideas are not so easily extirpated. Heine’s books were among those the Nazis flung on the bonfires in 1933; so were the books of more than 2,000 other authors, including Bertolt Brecht, Sigmund Freud, Karl Marx, Ernest Hemingway, Leo Tolstoy, and Franz Kafka. Josef Goebbels assured the enthusiastic crowd that they would “commit to the flames the evil spirit of the past.” The books, however, are still alive. It was the Third Reich that went down in flames.

The story of books is the story of books being suppressed — a story of staggering cruelty, and of equally staggering futility. The destruction of Mosul’s libraries prompted one Iraqi parliamentarian, Hakim al-Zamili, to compare ISIS to the Mongols who conquered Baghdad in 1258. Then, too, prized works of learning — on history, medicine, astronomy — were demolished. “The only difference is that Mongols threw the books in the Tigris River, while now [ISIS] is burning them,” al-Zamili said. “Different method, but same mentality.”

Indeed, in their bloodlust and zealotry, the book-burners of ISIS have many antecedents — Crusaders, Mongols, Nazis, Wahhabis, Khmer Rouge. But ISIS too will find that it is easier to slaughter human beings than to destroy ideas.

The Talmud records the death of Chanina ben Teradion, a 2nd-century Jewish sage killed by the Romans for violating a ban on teaching Torah. It was a terrible death: He was wrapped in the scroll from which he had been teaching and set on fire, with wet wool placed on his chest to prolong the agony. His horrified disciples, forced to witness his death, cried out: “Rabbi, what do you see?” He replied: “I see parchment burning, but the letters are soaring free.”

Any brute can burn parchment, or ransack a library, or blow up a mosque, or bulldoze cultural treasures. But not even mighty armies can destroy the ideas they embody. The Roman Empire couldn’t keep the letters from soaring free. ISIS can’t either.