Add this bowl of Italian delight -- a hearty symphony of spices, pasta and veggies -- to your healthy joyous January soup rotation 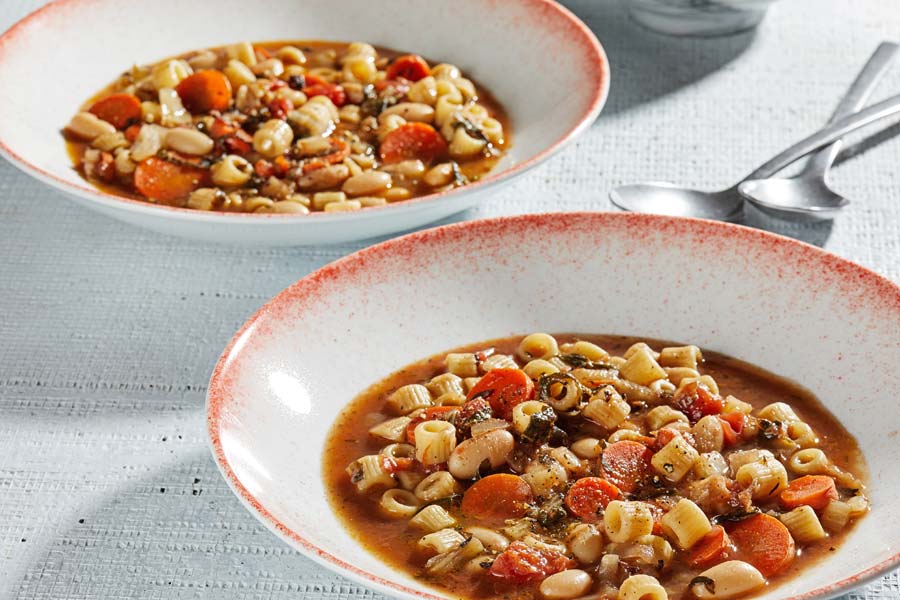 If you've had just one or maybe two minestrones in your life, you might be excused for thinking that they're always the same - summer vegetables, say, with tomatoes and beans and tiny pasta.

But the beauty of this Italian soup is that it is many things to many people, and it varies widely by season and geography. Some versions include rice instead of pasta, peas instead of (or in addition to) beans. In Liguria, they add that region's beloved pesto. No matter where it's made, the soup is inspired by what you've got on hand.

Minestrone is so popular, especially in plant-based-eating circles (and not just in Italy), that the latest one I love comes from two non-Italian sources. In their 2019 book "Vegan Everything" (The Experiment), Nadine Horn and Jorg Mayer apply such nice touches that their Winter Minestrone is just what I want to eat after a few weeks of holiday indulgences.

The vegetables include carrots, Swiss chard (with the ribs, for texture) and cabbage, the beans are cannellini or cranberry (a.k.a. borlotti), and the pasta is ditalini, those little tubes named for their thimble shape. But it's the spices - a small amount of cinnamon and an even smaller pinch of cloves - that make this cozy enough for any cold night.

This hearty minestrone is perfect for cold nights - and for using up the ends of vegetables in your fridge. Leave the ribs on the Swiss chard for some added texture.

In a large pot over medium-high heat, heat the oil until shimmering. Stir in the onion and cook, stirring, until translucent, about 4 minutes.

Stir in the thyme, oregano, salt, pepper, cinnamon and cloves, and cook until fragrant, 30 seconds. Add the chard, cabbage and carrots and cook, stirring frequently, until the carrots start to become tender, 8 to 10 minutes.

Stir in the broth, tomatoes and ditalini. Bring to a boil, then reduce the heat to low and cover the pot. Simmer until the ditalini are al dente and the greens are tender, about 20 minutes.

Stir in the beans and vinegar. Cook until the beans are heated through, about 3 minutes. Taste and add more salt and pepper, if needed. Serve hot.

© 2021 Distributed by The Washington Post News Service with Bloomberg News.