Go ahead, cook with chocolate, and not just dessert (Incl. reicpe for a mouthwatering main) 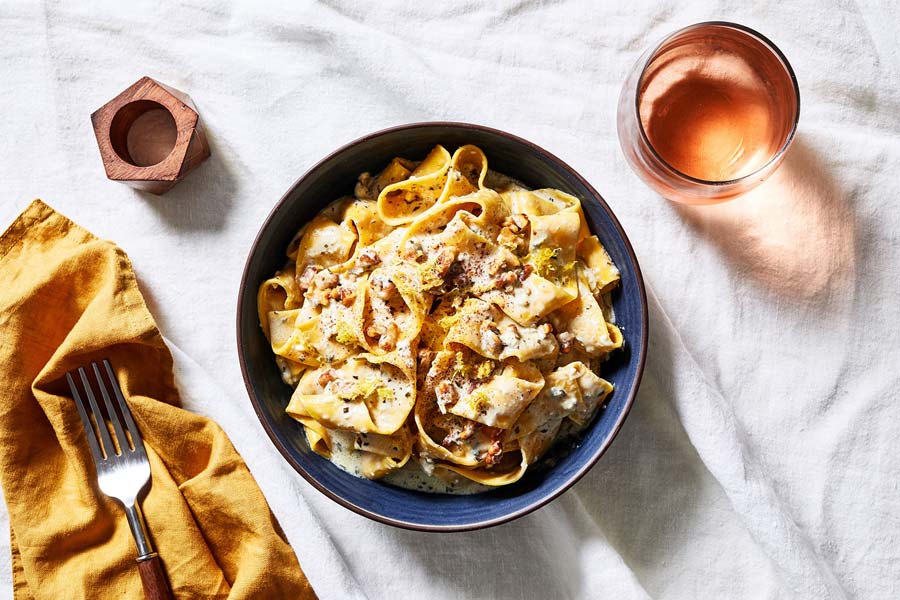 Chocolate and pasta clasped in a warm embrace? The pairing might sound doubtful, but the truth is, cocoa deserves a place in cooking beyond cakes, cookies and desserts. After all, chocolate is sweet only because manufacturers cram it with sugar and muffle its cocoa notes with milk and additives.

In their natural state, cacao beans - the precursors to chocolate - carry a wealth of flavors that can deliver contrast, brightness, richness and depth to a raft of savory dishes. If we let them.

In fact, chocolate for dinner is nothing new. We can probably trace its sticky history right back to cooks in the Americas 2,500 years ago or more. Archaeologists believe these ancient people, who revered cacao as a gift from the gods and sipped it in ceremonial drinks, also used chocolate in cooking.

Fragments of ceramics found in Honduras, for example, bear traces of cacao alongside remnants of turkey and fish. And a platter typically used to serve tamales has been unearthed in Mexico carrying ancient cacao residue. (We can thank theobromine, one of more than 1,000 compounds in cacao, for this knowledge: Its distinctive biological fingerprints can survive on artifacts for millennia.)

The idea that the ancients enjoyed chocolate for dinner is contentious. Some chocolate scholars argue that cacao was so utterly sacred to the Aztecs that employing it in cooking would have been the modern equivalent of sloshing communion wine in a stew. But I think the theory rings true. The term "mole," for the ancient family of thick baroque sauces popular in Mexican cuisine, some of which are imbued with chocolate, stems from the Aztec word for sauce, "molli." Perhaps the ancients prepared cacao-spiked sauces as divine nourishment, just as they prepared sacred chocolate drinks?

Chocolate eventually flowed beyond the Americas to Europe, where it arrived on the Catalan table in the 18th century. Very old specialties such as picadas - sauces of crushed garlic, almonds, fried bread and olive oil - sometimes glinted with chocolate, too. Today these are still stirred into stews and braises at the end of cooking to thicken and round out the flavors deliciously.

And Italian chefs in the 19th century working in the grandest and most affluent homes in Europe also embraced chocolate with brio. They deployed what was then an exceedingly expensive and exotic ingredient to showcase their culinary prowess, tossing it into dishes from pasta to polenta. Pan-fried chocolate-coated liver, anyone?

Perhaps some were overzealous, but these chefs recognized an essential truth that has been confirmed since by science: Cacao beans carry a retinue of flavors that work beautifully in savory cooking, just like other seeds such as fennel, coriander, cumin and black pepper. Let's get geeky for a moment. In their natural state, cacao beans contain more than 600 aroma molecules, the volatile airborne compounds that impart flavors, and these range from fruity and earthy to nutty and toasted.

This makes chocolate - not sugary candy bars, of course, but the quality high-cocoa-content dark stuff - a much more versatile ingredient than many cooks realize. Utilized like a spice, chocolate isn't the star of the plate; rather, it enhances the hero ingredients or adds contrast to other flavors. And the opportunities to wield chocolate in savory cooking are endless.

In the two years I spent researching my book about cocoa, I made many chocolate-scented discoveries. I learned that salty-sweet blue cheeses with a robust tang - like Gorgonzola dolce, for example - yearn for the bitter notes of 100 percent or semisweet chocolate. When you melt the cheese into a gooey sauce for pasta, add chopped toasted walnuts for a rubble of texture and milky bitterness, and then grate a dark nest of chocolate on the top, the result is a flavor bomb greater than the sum of its parts.

I now understand that tomato and chocolate are amiable companions, too. Both carry green aromas, and combining them brings out the best in each other, while chocolate also smooths out the acidity of tomatoes, adding depth and richness to their umami, or inherent savoriness. Grate a little dark chocolate into tomato soup or the classic Sicilian vegetable stew, caponata - go on! - and you will thank me.

All kinds of red meat, as well as chicken, turkey and game birds, get on famously with chocolate. The addition of a swarthy square or two to a sauce or gravy can transform a braise, chili, stew or pie filling into a dish of intrigue, like an unseen hand working culinary magic in the pan. And a mole-style chocolate-scented sauce adds nuance, depth and a whisper of bitterness when served as an accompaniment to any grilled or roasted meat. I'm excessively fond of bathing pulled or shredded roast pork in just such an aromatic liquor and then stuffing it into tacos and enchiladas.

Much like a pinch of salt allows you to perceive sharp or acidic notes more clearly, cacao nibs - broken-up toasted cacao beans and a sadly underutilized ingredient - add a touch of bitterness and a welcome counterpoint in savory salads studded with fruit or cheese. And texture! Nibs yield pops of piquancy and soft crunch in vinaigrettes and dressings. Or, make homemade crackers for cheese and fold crushed nibs into the dough, and you will showcase the gloriously nutty notes in Gruyere or ComtĂ©, or the exalted maltiness of brie.

At the very least, assemble some chocolate-scented salt. Into a coffee or spice grinder, pop some good-quality salt and cacao nibs, along with other flavorings you love - dried smoky chiles, dried herbs and spices, or dried citrus peel - and blitz to a fine powder. This heady blend will sit contentedly in an airtight jar by your stovetop, ready for canoodling just as happily with avocado on toast as with stews.

Unsweetened chocolate, the one that's marked as 100 percent, is the unsung hero of this dish and can be found at Whole Foods Market or online. Lacking sugar, it adds smoky and earthy notes to this rich and punchy pasta dish, lending a nice counterpoint to the salty funk of Gorgonzola. For crunch add some blitzed cacao nibs - and watch your perception for chocolate-as-sweet-ingredient dissipate forever.

© 2020 Distributed by The Washington Post News Service with Bloomberg News.