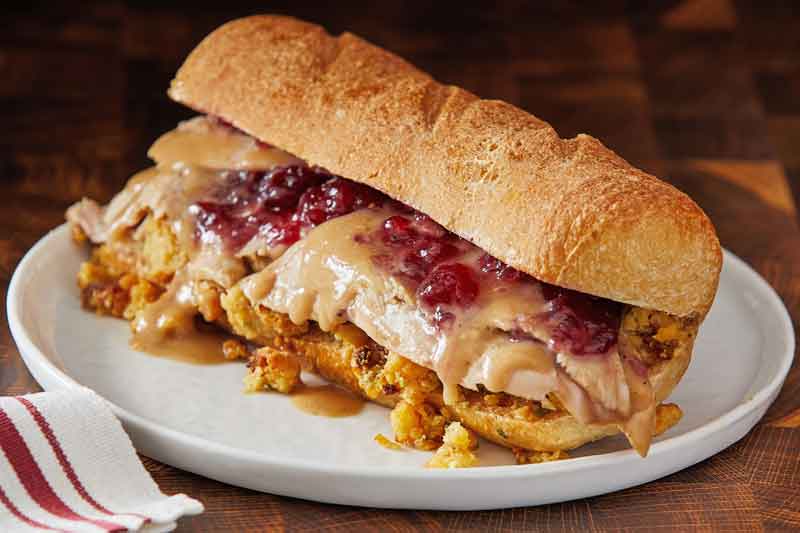 Holiday eating traditions are precious for many of us. We wait all year long to eat that certain dish with our favorite people.

One of my Thanksgiving traditions has been to join the long line at Parkway Bakery & Tavern in my hometown of New Orleans to get my once-a-year Thanksgiving po' boy. The locally famous overstuffed sandwich, sold only in November, is straightforward: French bread is layered with fresh-roasted turkey, hot cornbread dressing, whole-berry cranberry relish and then drenched in brown gravy.

General Manager Justin Kennedy explained that the popular restaurant has changed much of the way it does business due to the pandemic. It has cut its staff from 50 to 25 and shortened its operating hours. And these days, 60% of its regular business is takeout - even though the restaurant has an ample patio and limited indoor seating.

To accommodate the to-go orders, all 90 spots in its parking lot are now numbered. People drive in, call in their order, give their spot number and wait for a golf cart-ferried po' boy to arrive, he said. A toll-booth-like stand is manned by the "parking lot maĂ®tre d'" who hands out menus or answers questions. Parkway also added a walk-up ordering window for the bar.

But you cannot get the seasonal Thanksgiving po' boy that way. This year, the only way to get it is to call in your order, prepay with a credit card and pick it up at the restaurant on a Tuesday in November.

"There's no big crazy line, so it's working out," said Kennedy about the po' boy's fans who, each November, usually snake around the block, with some folks arriving early and holding their spots by sitting in beach chairs. Social distancing would have been difficult in that scenario, he said.

In 2020, the Thanksgiving po' boy is sold in a kit that makes two 11-inch po' boys. Each component - the sliced turkey dark/light meat, dressing, gravy, whole berry cranberry sauce - is in its own deli container. (Patrons can add a bottle of wine to benefit the Hogs for the Cause, a nonprofit group that supports those with pediatric brain cancer.)

Kennedy sees advantages to the new arrangement. "It'll hold in the refrigerator. You heat it up on your time, build it how you want it, with the dressing and gravy how you want it," he said, adding that the packages could easily serve four, "but two hungry, hungry people could take it down."

Also, he said, now no one who has stood in that long line gets angry when Parkway runs out of the fresh-made ingredients.

Kennedy created the po' boy in 2007 as a tribute to Thanksgiving leftovers. It grew in popularity each year, so in 2017, the restaurant began using the sandwich's fans to raise money for cancer research through the Al Copeland Foundation. People could make a $100 donation, skip the line and get their po' boy right away. This year, with no line, the foundation is selling masks at Parkway and hosting a "dip jar," which allows guests to "dip" their credit card and donate.

I hoped the restaurant, which sells its roast beef po' boy on Goldbelly, the national online mail-order food company, might sell the seasonal sandwich that way as well, but no luck. It takes too much extra staffing just to meet the locals' demand, Kennedy said.

"There's no way we could keep up with it," he said. "It's real labor intensive. We've got to keep it simple."

Rather than using leftovers, Parkway cooks everything fresh, expanding its operation to roast the whole turkey, something not normally served. Extra hands make pans and pans of cornbread dressing, gravy and big batches of whole-berry cranberry relish that are doctored up in-house - all of which is layered onto hundreds of feet of Leidenheimer French bread loaves.

Because I cannot order one, I decided to re-create it. If building a po' boy at home, Kennedy recommends at least 7 ounces of turkey, 12 ounces of stuffing, 4 ounces gravy and 4 ounces cranberry sauce on an 11-inch loaf of New Orleans-style French bread.

And there is the rub: I can make a good facsimile of the roasted turkey, gravy, cornbread dressing and cranberry sauce, but the Leidenheimer bread is elusive when I'm not in my hometown.

Leidenheimer is light, with thin, crunchy exterior crust and an airy, fluffy interior. This makes the bread a perfect partner for overstuffed sandwiches.

To approximate New Orleans-style French bread, I buy the lightest French-style long loaf or Belgian pistolets that I can find. Or I bake a frozen one, such as Pillsbury French bread. If the bread is dense, I pull out some of the soft interior and save it for making breadcrumbs. To get the crunch, I lightly toast the partially hollowed-out loaf until crisp.

Then, I follow Parkway's lead, using hot traditional Thanksgiving meal leftovers, but I scale mine down a bit from Kennedy's proportions.

What to serve on the side? At Parkway, I get the sweet potato french fries, of course.

I got close to Kennedy's creation, but it still left me longing for the day when I'll be home for the holidays and back at Parkway eating that po' boy, just as Kennedy imagines the day when New Orleanians will once again line up to order it - and sit side by side in his restaurant to dig in.

This po' boy is inspired by the one that draws lines around the block every November at Parkway Bakery and Tavern in New Orleans. The leftover stuffing, turkey and gravy should be heated before you begin assembling your sandwich. Look for French bread or Belgian-style pistolets that have a thin, crispy exterior and a light, fluffy interior. If your bread is dense, pull out some of the soft interior and lightly toast it until crisp. Grab a napkin. This is a messy sandwich.

Make Ahead: The turkey, stuffing, gravy and cranberry sauce can all be made up to 3 days ahead.

Position a rack in the middle of the oven and preheat to 350 degrees. Place the dressing in a small ovenproof pan and transfer to the oven for about 10 minutes or until warmed through.

In a medium saucepan over medium heat, add half the gravy and the turkey and toss together so the meat is heated through, about 5 minutes.

Halve the bread lengthwise down the center and place on a large, rimmed baking sheet. Transfer to the oven for about 3 minutes, or until just crisp.

On one side of the bread, spoon on the stuffing and spread it edge to edge. Top with the turkey and spoon the cranberry sauce on top of the meat. Then, generously ladle more gravy over the sandwich. Cover with the other side of the bread. If working with a 12-inch loaf, slice the sandwich in half with a sharp, serrated knife and serve.

Nutrition | Ingredients are too variable for analysis.

© 2020 Distributed by The Washington Post News Service with Bloomberg News.