Back to Academic Brainwashing 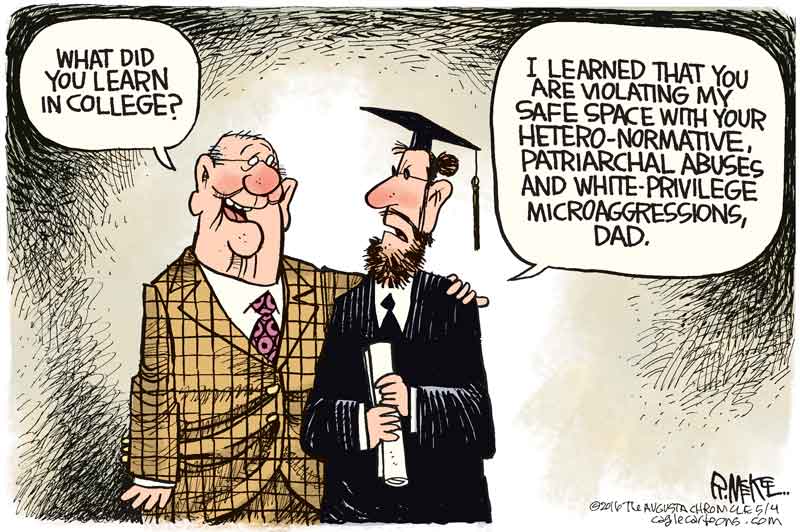 College students are not adults.

There. I said it.

To be clear, I am not referring to "re-entry" students, those who enroll after working for some years, or after serving in the military. I am referring to the "traditional" college student — i.e., the 18- or 19-year-old who attends college right out of high school.

They are adults in a legal sense. As such, they have certain legal rights (for example, the right to vote) and responsibilities (such as serving in the military if the draft is ever reinstated). And, certainly, many will appear to be physically mature. But in what should be the most meaningful senses — emotional and psychological maturity — they are not.

This is not mere opinion. Research has proven that the human brain is not fully developed until the mid-20s. Adolescents and older teens make decisions using the amygdala — the part of the brain associated with emotion. By contrast, adults with fully developed brains analyze information using the prefrontal cortex, which is associated with impulse control and long-term thinking.

A 2010 article from the Journal of Adolescent Health says: "(T)here is little empirical evidence to support age 18, the current legal age of majority, as an accurate marker of adult capacities. ... Where specifically, along the maturational path of cognitive and emotional development, individuals should be given certain societal rights and responsibilities continues to be a topic of intense interest. Increasingly, neuroscience has been called on to inform this question."


One of the questions higher education should be asking, in light of scientific evidence, is whether it's time to reconsider campus policies that permit the freewheeling liberties college students have taken — often to their detriment — for the past 40 to 50 years.

The cultural consensus used to be that it takes time, structure and meaningful limits — gradually removed — for young people to successfully transition to responsible adulthood. On college campuses, that consensus took the form of policies like housemothers or other adults in residence at fraternities and sororities; curfews or parietals for on-campus housing; single-sex dormitories; restrictions on alcohol use (reinforced in some cases by the state drinking age); and even dress codes for class attendance.

But by the late 1960s and early 1970s, most schools had eliminated these policies. Some of the changes were part and parcel of the so-called sexual revolution, and others were driven by reactions to the Vietnam War and the draft. But the rationale behind the arguments for abolition of limits was essentially the same: that college students were adults and should be treated as adults, including allowing them to make their own decisions.

Some four or five decades later, it's clear how wrong that was.

A student editorial in The Daily Tar Heel, the student newspaper at the University of North Carolina at Chapel Hill, provides an excellent example. UNC-Chapel Hill, like many universities across the country, tried to bring students back to campus this fall and restore some sort of normalcy after COVID-19 sent everyone home mid-spring semester. But despite very few COVID cases on campus when students returned, clusters of infections were springing up across campus within days, creating consternation and concerns.

The apparent source of the transmissions? Parties. UNC reversed course and announced the move to completely online learning.

The editorial expressed outrage that the editors claim reflects the sentiments of the student body: "(U)niversity leadership should have expected students, many of whom are now living on their own for the first time, to be reckless. Reports of parties throughout the weekend come as no surprise. Though these students are not faultless, it was the University's responsibility to disincentivize such gatherings by reconsidering its plans to operate in-person earlier on."

UNC is not alone. Other universities such as the University of Alabama, the University of North Georgia, Oklahoma State University and now my own university, Notre Dame, have seen a dramatic increase in COVID-19 cases on campus, largely attributable to student parties, and despite repeated warnings by university leadership.


If this behavior were confined to the past year, one could argue that it was a function of the global pandemic, a unique circumstance without precedent in the past 100 years. Further, many people know no one who has had the virus, or who has had a serious case. College students could be forgiven for underestimating its gravity.

But COVID-19 isn't the only example. We have plenty of proof that college students make poor decisions in an environment of unfettered freedom: rampant alcohol and other substance abuse; rising numbers of students with serious mental health issues; and irresponsible or even dangerous sexual behavior including the spread of sexually transmitted diseases and sexual assault.

College students cannot have it both ways. If they wish to be treated as adults, they must be able to demonstrate that they can behave as adults. If their position is that they will be "reckless" and irresponsible unless prevented by actual adults from behaving that way, then we should take them at their word — especially in light of what we know about their cognitive development.

It's time to admit the mistakes of the past and craft campus policies that better protect our young people while they learn to take on adult responsibilities. College students won't like it. But then, we shouldn't expect them to.