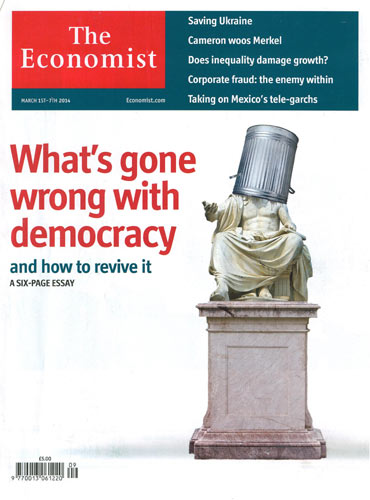 The Economist magazine recently published "What's gone wrong with Democracy ... and what can be done to revive it?" The suggestion is that democracy is some kind of ideal for organizing human conduct. That's a popular misconception.

The ideal way to organize human conduct is to create a system that maximizes personal liberty for all. Liberty and democracy are not synonymous and most often are opposites. In Federalist Paper No. 10, James Madison explained, "Measures are too often decided, not according to the rules of justice and the rights of the minor party, but by the superior force of an interested and overbearing majority." Democracy and majority rule confer an aura of legitimacy and respectability on acts that would otherwise be deemed tyrannical.

Let's look at majority rule, as a decision-making tool, and ask ourselves how many of our life choices we would like settled by majority rule. Would you want the kind of car you own to be decided through a democratic process, or would you prefer purchasing any car you please? Ask that same question about decisions such as where you shall live, what clothes you purchase, what food you eat, what entertainment you enjoy and what wines you drink. I'm sure that if anyone suggested that these choices be subject to a democratic process, we would deem it tyranny.

Our Founders saw democracy as a variant of tyranny. At the 1787 Constitutional Convention, Edmund Randolph said, "...that in tracing these evils to their origin every man had found it in the turbulence and follies of democracy." John Adams said, "Remember, democracy never lasts long. It soon wastes, exhausts, and murders itself. There never was a democracy yet that did not commit suicide." Alexander Hamilton said, "We are now forming a Republican form of government. Real Liberty is not found in the extremes of democracy, but in moderate governments. If we incline too much to democracy, we shall soon shoot into a monarchy, or some other form of dictatorship."

By the way, the word democracy appears in none of our founding documents.

The Founders of our nation recognized that we need government, but because the essence of government is force, and force is evil, government should be as small as possible. The Founders intended for us to have a limited republican form of government where human rights precede government and there is rule of law. Citizens, as well as government officials, are accountable to the same laws. Government intervenes in civil society only to protect its citizens against force and fraud, but does not intervene in the cases of peaceable, voluntary exchange. By contrast, in a democracy, the majority rules either directly or through its elected representatives. The law is whatever the government deems it to be. Rights may be granted or taken away.

Alert to the dangers of majority rule, the Constitution's framers inserted several anti-majority rules. In order to amend the Constitution, it requires a two-thirds vote of both houses, or two-thirds of state legislatures to propose an amendment, and it requires three-fourths of state legislatures for ratification. Election of the president is not done by a majority popular vote, but by the Electoral College.

If you don't have time to examine our founding documents, just ask yourself: Does our pledge of allegiance to the flag read to the democracy, or to the republic, for which it stands? Or, did Julia Ward Howe make a mistake in titling her Civil War song "The Battle Hymn of the Republic"? Should it have been "The Battle Hymn of the Democracy"?