Will the West Defend Itself? 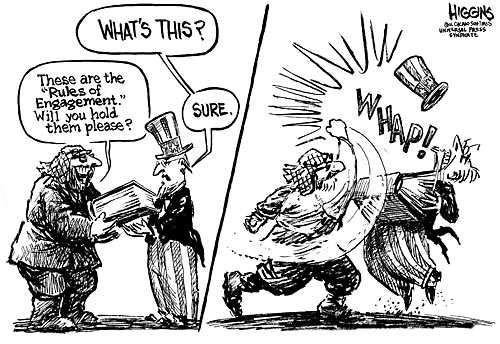 Leftists and progressives believe that the U.S. should become more like Europe. They praise Europe's massive welfare state, socialized medicine and stifling economic regulation and accept its unwillingness to defend itself against barbarism. I wonder whether America's leftists and progressives want to import some of Europe's barbaric extremism associated with its Muslim population.

Several European countries have what are called "no-go zones." No-go zones function as microstates governed by Shariah. The host countries' authorities have lost control over these areas. In some cases, they are unable to provide even police, firefighting and ambulance services.

In France, no-go zones are officially called Zones Urbaines Sensibles, or Sensitive Urban Zones. According to some reports, there is hardly a city in France that does not have at least one ZUS. There are estimated to be more than 750 such zones in France. According to The Washington Times, "France has Europe's largest population of Muslims, some of whom talk openly of ruling the country one day and casting aside Western legal systems for harsh, Islam-based Shariah law."

France is by no means by itself. Sweden has some of the most liberal immigration laws in Europe. Malmo is Sweden's third-largest city, with a population over 300,000, of which 25 percent is Muslims who have created large no-go zones for non-Muslims. Fire and emergency workers refuse to enter Malmo's mostly Muslim Rosengaard district without police escort. Gothenburg is Sweden's second-largest city. In Angered, one of the city's districts, Muslim youths pelt police cars with Molotov cocktails and have already destroyed more than 15 police cars. They use green lasers to temporarily blind police officers by pointing them at their eyes.

The Gatestone Institute reports that an Islamist group called Muslims Against Crusades has launched an ambitious campaign to turn 12 British cities into independent Islamic states, including Birmingham, Leeds, Liverpool, Manchester and what the group calls "Londonistan." The so-called Islamic Emirates would function as autonomous enclaves ruled by Shariah and operate entirely outside British jurisprudence. Several years ago, The Telegraph reported: "Islamic extremists have created 'no-go' areas across Britain where it is too dangerous for non-Muslims to enter. ... People of a different race or faith face physical attack if they live or work in communities dominated by a strict Muslim ideology."

No-go zones have also emerged in Germany, Belgium, the Netherlands and Italy. The basic question is: Does the Western world have the power to control its countries? In terms of capacity, as opposed to will, the answer is a clear yes. Western lack of will is a result of our having been paralyzed by the doctrine of multiculturalism. Diversity worship and multiculturalism have currency and are cause for celebration among our elite. Multiculturalists teach that cultural values are morally equivalent, such as those of Islam and the West. To suggest that Western values are superior to others would win one opprobrium by the know-it-all elite. Western values are indeed superior to all others because they hold the individual as supreme. Though Western values are superior to all others, one need not be a Westerner to hold Western values.

German Chancellor Angela Merkel has declared that in Germany, multiculturalism has "utterly failed." Both Australia's ex-prime minister John Howard and Spain's ex-prime minister Jose Maria Aznar reached the same conclusion about multiculturalism in their countries. British Prime Minister David Cameron has warned that multiculturalism is fostering extremist ideology and directly contributing to homegrown Islamic terrorism. UK Independence Party leader Nigel Farage said the United Kingdom's push for multiculturalism has not united Britons but pushed them apart. It has allowed for Islam to emerge despite Britain's Judeo-Christian culture. Former British Prime Minister Tony Blair said the roots of violent Islamism are not "superficial but deep" and can be found "in the extremist minority that now, in every European city, preach hatred of the West and our way of life." I wonder whether America's leftists and progressives see multiculturalism as a success or failure.