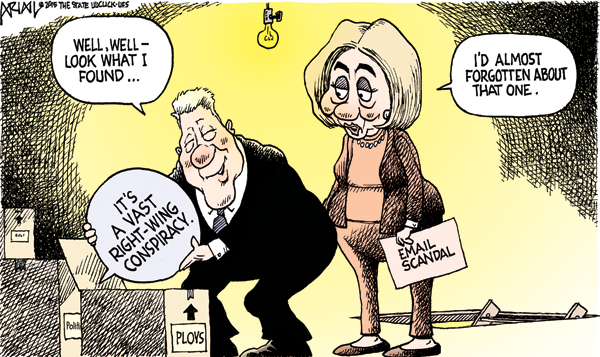 A special House committee investigating the terrorist attack in Benghazi, , on that killed Ambassador and three other Americans may have helped become president of .

The former secretary of state refused an invitation to testify in private, as other witnesses had done, probably because she thought her appearance would benefit her presidential prospects in at least three ways: She could make the Republican committee members look inept; the major media would protect her, and average people would not pay attention; if they did, they would believe what the media told them. She was right on all three counts.

refused to be lured into a fight with Republican committee members. Unlike a previous appearance during which she shouted, "What difference does it make?" when asked if the Benghazi attack stemmed, as the administration asserted, from a spontaneous protest gone too far, this latest appearance was designed to feature Clinton as strong, cool and in control, all qualities necessary in a president.

Republican members were unable to rattle her or get her to admit she lied when she initially blamed the attack on terrorists in emails to her daughter and in a call to prime minister but said in public that the attacks were inspired by a crude Internet video satirizing the Prophet Mohammed. Various pundits have asserted that it is because the Obama administration had claimed that the death of bin Laden marked "...the most significant achievement to date in our nation's effort to defeat al-Qaida," and the narrative was a critical component in the president's re-election strategy. The administration couldn't afford to acknowledge that neither al-Qaida, nor terrorism, had been dealt a mortal blow.

If the public were paying attention -- and in the age of the Kardashians that is doubtful -- they probably wouldn't care if lied about Benghazi or her emails. The bar for honesty among politicians is so low that it is no longer news when politicians lie, only when they tell the truth. Still, many opinion polls, including a national poll, find that a majority of the American people believe her to be untrustworthy.

The major media are openly and shamelessly boosting Clinton and her presidential campaign and will continue to clear a path for her all the way to the Democratic presidential nomination and to . Every major newspaper declared Hillary the winner in the 11-hour marathon hearing. So, too, the TV networks.

The conservative listed more: Thursday's "NBC Nightly News" concluded that she "stood her ground" as the committee "dissolved into bickering" while she "stayed above the fray" and removed "Benghazi from being an issue in the 2016 campaign."

Appearing on the "," political director said that Clinton "avoid(ed)" falling into any "pitfalls" as those questioning her fought "like cats and dogs."

On , interviewed political commentator , who gushed over Clinton's performance while comparing Republicans to and the for conducting an "abusive" hearing. In the next hour, on "CNN Tonight," Bernstein resurfaced, trotting out the same comparison against "a group of demagogues," adding that Hillary "did great" in using "the facts at her command."

There were several references to the stupid comment by Rep. (R-CA), who said, "Everybody thought was unbeatable, right? But we put together a Benghazi Special Committee, a select committee. What are her numbers today? Her numbers are dropping. Why? Because she's untrustable."

The big question for Republicans is who is strong and credible enough to take on in a debate after first securing the party's nomination? Ask me that question in March.