Faith and the would-be veeps 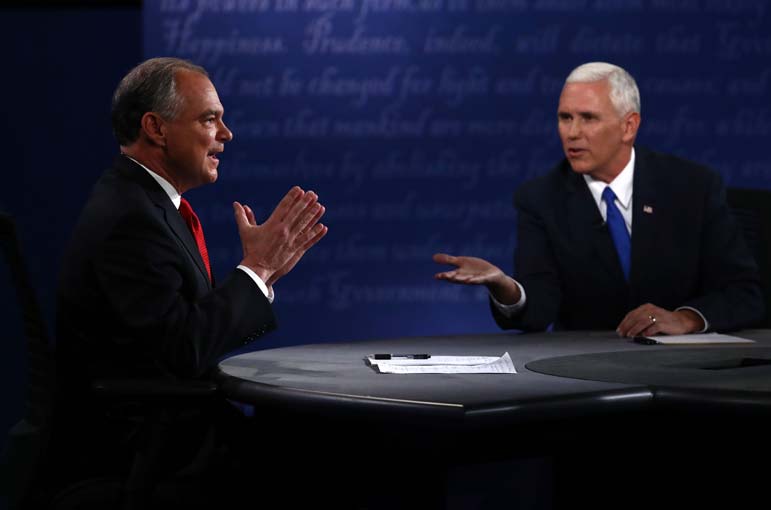 In every election cycle since introduced "born again" into the political lexicon, a politician's faith has been an object of curiosity and contention.

At an appearance in in January, responded to a question about her faith, saying she is a Christian and a Methodist and that to her "the most important commandment is to love the Lord with all your might and to love your neighbor as yourself."

She is correct, but the challenge comes in how that commandment and Scripture are applied in the political arena. The same Scripture in which says she believes also teaches that marriage is between a man and a woman and that human life begins at conception. is pro-choice and favors same-sex marriage and the repeal of the Hyde Amendment, which prohibits taxpayer funds being used for abortion.

This brings us to Tuesday's debate between the two candidates for vice president. Gov. (R-IN) is a pro-life evangelical Christian who believes in traditional marriage. Sen. (D-VA.) is a Roman Catholic who takes the opposite view.

Most evangelicals believe "All Scripture is God-breathed and is useful for teaching, rebuking, correcting and training in righteousness..." (2 Timothy 3:16). Many Roman Catholics accept the authority of Scripture, but also place tradition and the teachings of the Pope on par with it.

Why does this matter? If candidates for high office claim inspiration, even instruction, from an Authority higher than themselves, they should be asked about it. If they deviate from their faith's teachings, they should be required to explain.

often refers to his Catholic faith and to what he calls "a turning point in my life," which came in 1980 while on a "mission trip" to . Left out of his narrative is the liberation theology taught by radical Catholic priests in the region at the time, a theology which closely tracked with Marxists committed to the violent overthrow of Latin American governments.

We have been down this road before with Catholic politicians, including Vice President , Secretary of State , House Minority Leader and the late Gov. , all of whom have taken political positions diametrically opposed to Catholic teaching.

About his departure from Catholic instruction and statements from the current and previous popes, especially on social issues, Kaine has said: "I think it's going to change. ... Who am I to challenge God for the beautiful diversity of the human family? I think we're supposed to celebrate it, not challenge it." That attitude might legitimize a multitude of sins.

Writing about church teachings on same-sex marriage, of says, "If Sen. Kaine wants to go beyond politics to opine on the theology of the , he should at least consult Pope Francis' most recent exhortation, Amoris Laetitia, in which Francis states, 'There are absolutely no grounds for considering homosexual unions to be in any way similar or even remotely analogous to God's plan for marriage and family.'"

The same can be said of consistent Catholic teaching about human life.

In another statement from the , Dr. Grazie Pozo Christie writes: "Senator Kaine's attempt to cloak his political pandering as theological speculation exposes the Clinton campaign's profoundly anti-Catholic ideological agenda. has previously stated that pro-life people of faith will simply have to change their religious views. ... Now her running mate suggests the Church needs to do the same on the issue of marriage and family..."