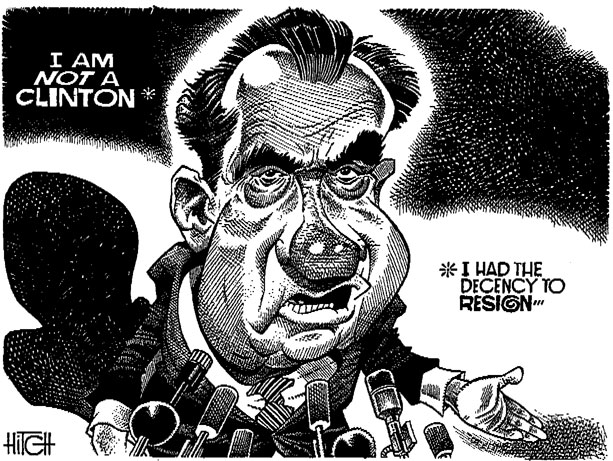 One wouldn't think and former President would have a lot in common, but in responding to FBI investigators that she "could not recall any briefing or training by State related to retention of federal records or handling classified information," Clinton took a page straight out of Nixon's playbook.

In a March 23, 1973 meeting with top aides and to discuss what Dean should say during testimony before a grand jury looking into the Watergate affair, the following exchange took place.

Haldeman: "You can say you have forgotten, can't you?"

Dean: "Sure, but you are chancing a very high risk for a perjury situation."

Thirty-nine times by CNNâ€™s count, invoked Nixon's advice in her response to questions from FBI investigators. No wonder. The things she might recall could be contradictory to statements she has made in the past.

The Weekly Standard has chronicled a few of them in an editorial titled "Absolute, Categorical Lies." They are too numerous to list here, but worth reading.

Clinton also claimed to have used two devices for her emails, one for work, the other personal. According to The Hill, in the just released report on Clinton's emails, the FBI identified 13 mobile devices "that were potentially used to send emails via clintonemail.com." In addition, writes Bloomberg Politics, the FBI "cited five iPads it sought as part of the probe that were 'potentially' used to send private e-mails." The FBI found three. No one knows what happened to the other two. Maybe someone should dig up Sidney Blumenthalâ€™s backyard?

You can almost smell the corruption.

In the age of reality TV, speculation is now considered almost as good as fact, so suppose really can't recall? What if there is a medical explanation for her impaired memory?

fell and suffered a concussion in , which husband Bill said took "six months of very serious work to get over." claimed the recovery period was much shorter. Who do we believe? admitted to having a blood clot and double vision and to taking blood thinners. Her doctors, however, insist she's fit to be president. Is there anything else? With the Clintons the question answers itself.

WebMD.com has some useful information: "A mild or moderate concussion may have longer-lasting consequences than previously realized, a new study suggests.

"By comparing brain imaging studies and thinking tests between healthy people and those with relatively minor concussions, the researchers found that the recovery of thinking skills can take a long time...

"Initially, those with concussions had thinking and memory test scores that were 25 percent lower than those in healthy people. One year after injury, however, while the scores for those with and without concussions were similar, those who had had brain injuries still had evidence of brain damage on imaging tests, with clear signs of continued disruption to key brain cells.

"The findings are especially important because 90 percent of all traumatic brain injuries are mild to moderate, said , senior author of the study and professor of magnetic resonance physics at , in the ."

Is memory loss the result of her concussion, or is she lying? I'm more inclined to believe the latter, as the Clintons' dissembling precedes her injury. An examination by a neurologist would answer one question. The other will have to be determined by voters.

But considering what happened to Nixon, might not one to pattern herself after him.