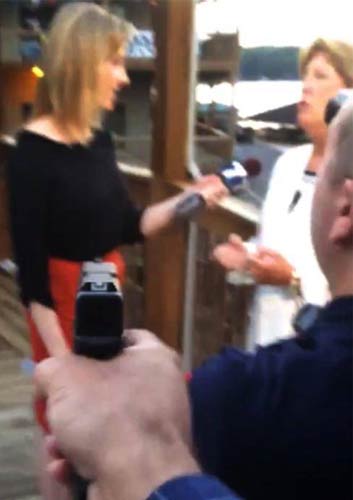 Alison Parker a few seconds before her murder.

The horrible murder of two local journalists in , has affected me more than I thought it would. Journalists are taught early on to compartmentalize. As a local TV reporter, I saw bodies from plane crashes and victims of mass murder. I covered natural disasters and witnessed the aftermath of cruelty to children and other inhumanities.

The murders of 24-year-old and her 27-year-old cameraman, , by a deranged and disgruntled man whose shoulder chip was as big as a boulder took me back to my early days in the business.

At Alison's age, I was working as an private with Armed Forces Radio in . Most of us had civilian jobs on the side to supplement our meager military pay. Mine was as an engineer at in the . Most journalists start out at small stations or small newspapers, learning the craft and honing skills. The salaries are puny, but love for the profession and the prospects for advancement (and higher pay) keep most plugging away in hopes of a career breakthrough.

At Adam's age, I was working for an affiliate in , covering the space program, the medical center and general assignments. My cameraman and I were sometimes exposed to the elements and potential danger, but we never expected to be shot dead while working, not even during a prison riot.

President Obama and Governor were quick to exploit the incident, predictably calling for more gun laws. Understandably, Parker's father echoed their statements. In fact, had an armed security guard been present at the shopping complex where the shooting occurred, there is a good chance the shooter might have been stopped before he got close to his targets. Laws do not stop lawbreakers, but good guys with guns can stop bad guys with guns.

News networks and some local stations now have security never considered during my early years in TV and radio, beginning in the lobby. There are coded passes for employees, elevator cameras and bullet- and bomb-resistant doors that can seal off management and the offices of network stars at the push of a panic button. Some of the best known media personalities even travel with armed security.

I never met Parker and Ward, but I can identify with their ambitions. Each appeared to have bright futures in journalism. Both were in committed relationships. Investigators want to know how acquired his gun. They will also want to learn why his mental problems, unprofessional behavior and displays of anger that led to his dismissal from more than one TV station and put fear into his colleagues (police were called to escort him from the Roanoke station after he refused to leave and began cursing his boss and threatening revenge) did not show up during a required background check. These are legitimate questions.

Perhaps this incident will cause some to reconsider the universal denunciation of "the media." Most reporters have families and many work for lower pay than they might receive in other professions.

Everyone working in local news no doubt has been affected by this incident. While notes and gifts of condolences are being received at WDBJ7 in , TV viewers in other markets might want to send their local station notes of appreciation for the job they are doing in bringing needed information to the public. That would be one good way to honor Alison and Adam.