Memo to Obama: You're No Ronald Reagan 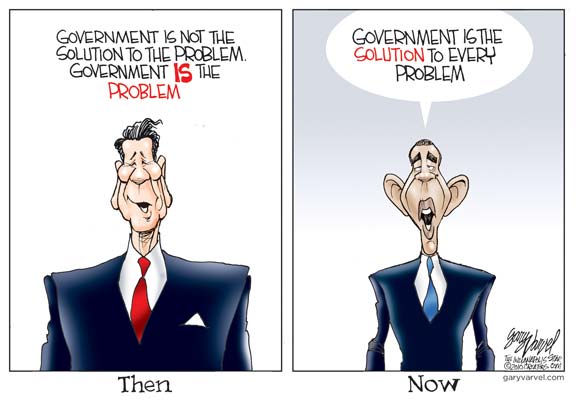 At his press conference last Wednesday, our president of self-regard again linked himself with , seeking to equate his supposed success in gaining a deal with not to build a nuclear weapon for 10 years to Reagan's arms control negotiations with the .

There is at least one major difference, which causes Obama's analogy to collapse. Reagan regarded the as an "evil empire" and vowed to defeat it. He said not just the , but communism itself, would wind up "on the ash heap of history." Obama hears, sees and speaks no evil against the evil empire of , or the vile terrorist groups it supports across the region. Instead he seeks accommodation, not elimination of this modern scourge.

According to the report, "Iranian military action, often working through proxies using terrorist tactics, has led to the deaths of well over a thousand American soldiers in and over the last decade and a half.

"Throughout the course of the campaign, a variety of weapons flowed into the country through direct purchases by the government of . These included Explosively Formed Penetrators (EFPs), a shaped charge designed to penetrate armor. These weapons -- often camouflaged as rocks -- were identical to those employed by Hizbullah against Israeli forces. In 2006, the revealed that three Iranian factories were "mass producing" the roadside EFP bombs used to kill soldiers in ...

" paid Taliban fighters for each U.S. soldier they killed in . The Sunday Times reported that a Taliban operative received from an Iranian firm in as reward for an attack in 2010 that killed several Afghan government troops and destroyed an American armored vehicle."

These are the people who can supposedly be trusted not to cheat on a deal with a government they regard as "satanic" and worthy of every tactic they can employ to eradicate it? These are people who will not stop pursuing whatever weaponry they need -- conventional or nuclear -- toward their stated objective of ushering in the Islamic messiah, whom some mullahs have predicted will arrive only after a nuclear war has begun.

Islamic theology is an embarrassment to secular diplomats and reporters. At the president's press conference, no one asked him the most obvious question: If Iran's leaders believe their god wants them to lie, cheat and build a nuclear bomb in the pursuit of their often-stated goal of eliminating and terrorizing America, how do you, whom they regard as the infidel president of an infidel nation, get them to disobey what they believe are direct orders from Allah?

Wouldn't you love to hear that question asked and answered?

President Obama claims there were only two choices: his agreement, or war. There were other options, including stepped-up sanctions, which were hurting the Iranian economy, and a stated goal of regime change. In 2009, following an uprising after a rigged election in , President Obama could not bring himself to say a word in defense of moderates in who sought to topple the regime. This showed the Mullahs that America could be had.

This agreement has proven them right. A cartoon in the shows the Ayatollah Khamenei, running "rings" around President Obama. The rings are the atomic sign.

The headline on liberal columnist column is descriptive: "Obama's news conference was a case for American weakness."

There will be hell to pay for this deal, possibly literally.