They hate us, but who cares? 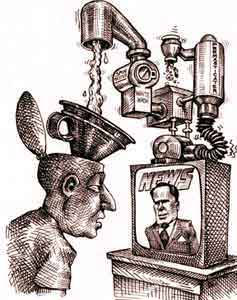 In her 1985 speech after receiving the Best Actress Oscar for her role in "Places in the Heart," actress famously gushed, "You like me; you really, really like me."

The latest in a long history of surveys examining the public's level of trust in the news media might paraphrase Field's line this way: "You hate us; you really, really hate us, but we don't care."

The 2015 State of the , a project of the First Amendment Center, has "discovered" what most of us could have told them. According to the survey, "Only 24 percent now think that the news media try to report on news without bias. This represents a 17-point drop from last year and a 22-point drop from 2013. In fact, the 24 percent who now say the media try to report news without bias is the lowest since we began asking this question in 2004."

The survey also revealed that Democrats (36 percent) are more likely to think that the news media try to be unbiased than do either Republicans (19 percent) or independents (21 percent).

Though the survey doesn't distinguish between media some regard as conservative and others as liberal, I would venture to guess that Democrats mostly believe the media they consume (broadcast networks, , and ) are not biased, while conservatives, who favor and conservative talk radio as an antidote to what they perceive as an imbalance in the mainstream media, have a different perception. And perception is reality when it comes to ratings and profits.

The downward trajectory of the public's trust in media is not encouraging for those of us in what used to be considered, at least by those in it, as an honorable profession, the only one mentioned in the Constitution, if you don't count government as a profession.

The survey suggests that controversies about anchor (embellishing and distorting facts) and of (failure to disclose contributions to the ) "have taken their toll on news media credibility among Americans. It is also possible that the public is reacting negatively to media coverage of the high-profile events in Ferguson and over the past year."

As with previous surveys that have indicated growing public distrust of journalists, even disgust of the news media, there is no response so far from any of the major news organizations, no statement of what they intend to do about it.

No other business operates this way. If a department store is losing customers because of poor selection and high prices, the store wouldn't tell customers to shop elsewhere if they don't like their products and prices. If it did, it would quickly go out of business. Not so the news media. They lay people off; they reduce the size of their newspapers, but they refuse to acknowledge their biases and do something to win back viewers and readers.

The denial is complete and across the board. When had a show on and one of these surveys was published, he would have a panel of journalists on to discuss the subject of bias. None would admit to bias, even when callers accused them of it. Instead, they seemed to suggest there must be something wrong with the public's impression of them and thus the information consumer was to blame, which is a far cry from the old retail slogan "the customer is always right."

A healthy journalism is vital to a free society. If the public doesn't trust the news they are getting; if they believe the institution focuses too much on trivialities and distractions instead of consequential things; if they don't believe reporters are being truthful, then not only is the profession's credibility damaged, the country's stability is, too. And that leads to poor leadership, which is one reason we have so many bad leaders in both parties and at all levels.