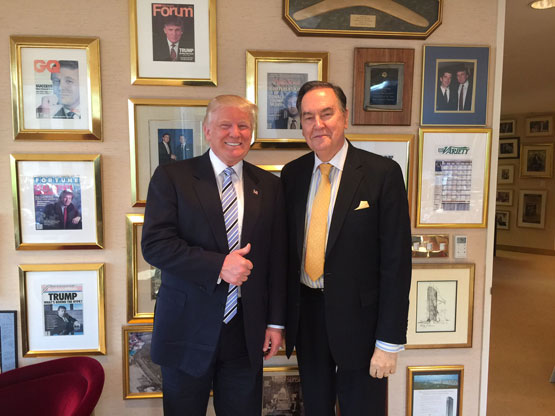 -- If there is one explanation for success it is this: Unlike most Republicans, he fights back. He may not have the late finesse, but he sees himself as more than capable of dealing a "knockout" punch to in November. That ought to be the goal of any presidential nominee.

During an interview in his office Monday, I asked about his temperament, a subject often raised by critics. recently said he shouldn't be trusted with the nuclear codes and that he is so thin-skinned he might start a war.

Well, yes, and many considered just as brash and his likeness made it onto .

What about the references to race and ethnicity that have brought criticism from leading Republicans? I suggested that most Americans don't care about the civil lawsuit against (which alleges the university is a scam), the ethnic background of U.S. District Judge , who is presiding over the case or whether Trump is being treated "fairly." What Americans care about are jobs, the economy and terrorist threats. Does Trump plan to pivot from such things and start focusing on what resonates with most voters?

"Yes," he said, "it's starting very soon." In a statement released Tuesday, however, Trump addressed the Curiel issue one more time. "It is unfortunate that my comments have been misconstrued as a categorical attack against people of Mexican heritage. I am friends with and employ thousands of people of Mexican and Hispanic descent. ... I do not feel that one's heritage makes them incapable of being impartial..."

He then vowed not to speak about the matter again.

In our interview, Trump noted he has received more votes than . Yes, but primaries are but a small percentage of the larger number of people who will vote in November. A considerable number of them will vote for ; some conservatives and Republicans will refuse to vote for Trump.

Trump says his formula for making America great again begins with putting the country first: "I hate to use the word 'change,' because Obama used to use that word ... but (people) are hungry for real change; they're hungry for making things right."

He's right and both parties share the blame for the dysfunction.

Trump's plan for reforming and , the main drivers of our debt, consists of eliminating "waste, fraud and abuse" and growing the economy to a point where there will be sufficient money to sustain these programs for decades to come.

He promises that the list of judges provided to him by and will either be the ones he nominates to federal benches, "or people exactly like them. In fact, I'm going to expand the list by four."

Trump rejects the notion of a "living Constitution," preferring the view of the late Justice that the document means what it says. He favors school choice, especially for minority children in failing public schools, a position he thinks will help get him African-American votes. He says President Obama, not him, has divided the country, pitting rich against poor and blacks against whites. "I had hoped Obama would be a good cheerleader for the country. He's really brought the opposite in spirit to the country. He's a very negative force." He adds, "If we have four years of Hillary I don't know if we can ever come back."

If does adopt a positive view of America that is inclusive of all Americans, he might be able to resonate with a majority of voters. Will he? We're about to find out.

Full interview may be accessed here.