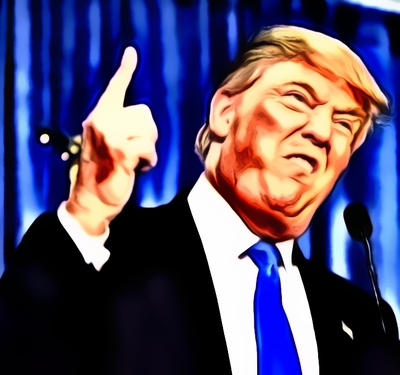 During an interview last June in his New York office, I asked about his use of language that many considered insulting and divisive. "Will there be a pivot for you from the primaries to the general election campaign?"

The candidate said "I agree" about the tone of the campaign and that he intended to pivot. "It's starting very soon," he promised.

The president was within his rights to discharge FBI Director , but it is the way he did it, sending a letter instead of a face-to-face meeting or even a phone call, that was disturbing. Comey was not only blindsided when he learned of his dismissal during a speech in , the president called him names and then tweeted that Comey "...better hope that there are no "tapes" of our conversations before he starts leaking to the press!"

Intimidation is ugly and unbecoming for any president. Comey's sudden dismissal is fueling suspicions there is more to discover about alleged connections between the Trump campaign and , something that has yet to be proved.

Whatever Comey's shortcomings -- and there are more than a few -- he deserved better, even if only to make the president look good. In an interview with of NBC News, the president called Comey "a showboat" and said he was guilty of "grandstanding." Maybe so, but wouldn't the president have benefited by thanking Comey for his years of public service? Wouldn't it have been better if he'd said, "I want to see the FBI move in a different direction"?

The president has threatened to cancel the daily briefings because he says he is moving so fast his spokespeople don't always get it right. Fine, let him brief the press directly as FDR and did.

I voted for Trump and have appreciated his promises to take the country in a better and more prosperous direction. His selection of for the and his promise to fill lower courts with constitutional conservatives has the potential to place government back within the boundaries the Founders set for it. His businessman instincts to reform a government that has become bloated, dysfunctional and burdened with debt are much needed. However, the president's goals are hurt when he, instead of his policies, becomes the story -- especially a negative story.

Anger is not policy. Insults do little to change anyone's mind. The latest Poll shows the president's approval rating has dropped to 36 percent, a near record low. His disapproval has risen to 58 percent. Astonishingly, the poll also shows the media, which Trump has often called "fake news," and worse, is now trusted more than him. That is bound to harm his policy goals as smell blood and feel empowered to oppose him on everything.

Here are some positive suggestions that might turn things around. An old song should be his theme: "Try a Little Kindness." Find some positive things to say and do. Unemployment has fallen to its lowest level since 1988. Have some newly employed people in, as he did with the coal miners, some of whom were unemployed or underemployed during the Obama years. They could thank the president for reducing expensive regulations on businesses that allowed them to hire more people.

Trump should remind Americans where he is trying to take the country. Turn those constant tweets into positive statements. Just as light overcomes darkness, so, too, do positives overcome negatives.

Americans respond to optimism (read speeches). Let the own gloom and doom. The president should rise above that and rekindle an optimistic spirit that has always led America to new heights. Please knock off the insults, Mr. President. They are poisoning your presidency and the good you and a can do.